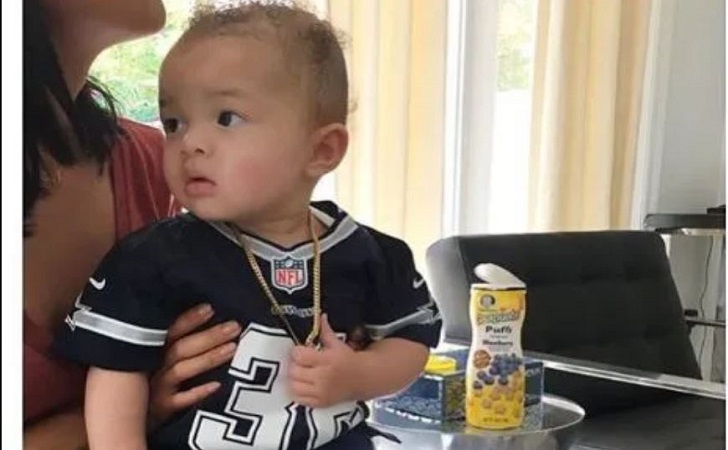 Jru Scandrick is the son of Draya Michele and Orlando Scandrick. While his mother is a successful American actress, fashion designer, model, his father is a Football cornerback. The young kid in the family, Jru shares a great relationship with both his parents.

Further, he also has an older half-brother named Kniko Howard. Well, Jru is just 5 years of age and has also earned decent recognition as a star kid. Here, in this article, we are going to discuss some unexplored facts about Draya Michele’s son Jru Scandrick.

Jru Scandrick Is The Youngest Son Of Draya Michele

As we said, Jru Scandrick is the son of Draya Michele and her ex-fiance Orlando Scandrick. He was born on April 8, 2016, in Burbank, California. As of 2021, he is 5 years old.

At the time of his birth, he was 6.5lbs and measured 20 inches long. Both his parents seemed super excited about the birth of a new member of the family. Talking to People about her son Jru, she said,

“We are super excited to add our sixth member to the family. “He’s such a good, healthy baby and everyone is already infatuated with him. His brother and sisters are in love.”

Michele had earlier announced her pregnancy with Jru back in January saying,

“We are preparing for a Taurus baby. He’ll be the first Taurus in our family of four Aquarius and one Capricorn (almost Aquarius)!”

However, unlike their expectation, their son was born to be an Aries.

Just for a fact, Jru’s mother Draya was merely 17 years old when she welcomed Kniko.

Besides, like any siblings, Jru shares a great relationship with all his brothers and sisters. Hope their love for one another continues forever.

His Parents Are No More Together

Though Jru’s parents Michele and Scandrick were in an on-off relationship for quite a while, they are unfortunately no more together. The former couple reportedly began dating in 2014. Not only this but the NFL player Orlando had even proposed to her by 2015.

As per the reports, he got on his knees with a $400,000 engagement ring, while they were together for a movie date. Talking about the proposal Michele once said,

“He got down on one knee and as soon as he started to talk I got nervous and couldn’t help but to laugh hysterically. I was laughing and crying at the same time.”

But unfortunately, things were not meant to last forever. Almost three years after the birth of their son Jru Scandrick, The couple called it quits in 2019. In the December of 2019, Draya took to Instagram to announce the news where she wrote,

“I have been single the entire month of December. So if anyone has anything to say about me or the guy I used to be engaged to, save, it. We don’t care.”

Jru Scandrick is still a very young kid and has not started his career yet. But his parents are successful individuals. To begin with, his mother Draya is a successful actress, model, social media personality, and fashion designer as well.

She began her career as a guest in the TV series The Wendy Williams Show in 2011. Following this, she appeared in a hugely successful TV series Basketball Wives LA. She appeared in 54 episodes of the series from 2011 to 2015. She made her first appearance as an actress in the 2015 TV movie Will to Love, where she portrayed a character named Candice Koleto.

Apart from these, she has also appeared in many other TV series like Bring Out the Lady, Til Death Do Us Part, Tales, L.A.’s Finest. Most of her works have been hugely successful.

Besides, as a fashion designer, she owns a swimwear line named Mint Swim, and a lifestyle clothing line Fine Ass Girls. She also launched her latest clothing line Beige & Coco in November 2016.

Talking about Jru Scandrick’s father Orlando, he is a former American football cornerback and currently a sports commentator. He reportedly started playing football in his college and was part of Boise State University’s football team. Eventually, he was drafted to Dallas Cowboys in 2008 and he also played for Kansas City Chiefs and Philadelphia Eagles in the past.

Is Jru Scandrick On Social Media?

Unfortunately, Jru is not on social media platforms. But he is occasionally seen in his mother’s Instagram posts. Well, Draya is every active o Instagram and Twitter with over 8.3 million followers & 662k followers respectively.

On the other hand, Orlando is also active on Instagram with over 336k followers and over 14k on Twitter.