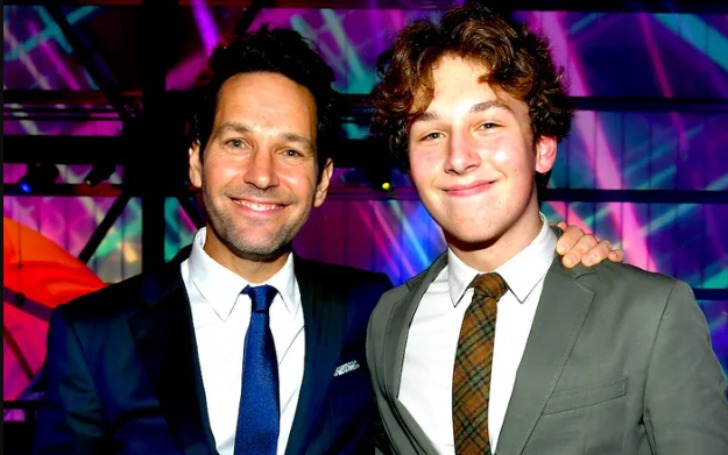 Jack Sullivan Rudd is the son of an American actor Paul Rudd (aka Paul Stephen Rudd). His father is best known for his work in movies like Ant-Man and the Wasp: Quantumania, Ghostbusters: Afterlife, This Is 40, Knocked Up, and Avengers: Endgame.

Similarly, the 5 feet and 9 inches tall celebrity kid Jack is his father’s twin and the dad-son duo is a great football fan. Back in 2020, when Sullivan appeared together with his daddy Paul on the Kansas City Chiefs game during Super Bowl LIV, the two posed for the picture. Soon, the look-alike father-son images hit the media, and Paul’s fans became curious about their favorite star’s son Jack.

So, today, we have come up with some interesting facts about Ant-man star Paul Rudd’s only son Jack Sullivan Rudd. Is Jack in a relationship? Who Is his girlfriend? Let’s get to know.

When Was Jack Sullivan Rudd Born? His Age And Family Roots

Talking about his family roots, Rudd’s paternal grandparents are originally from London and migrated to the USA. Jack’s paternal grandfather Michael Rudd was a historical tour guide and former vice president of Trans World Airlines while his grandmother Gloria Irene Granville was a sales manager at TV station KSMO-Tv in Kansas.

Having such a stable family background, Sullivan was raised in a luxurious lifestyle. He grew up alongside his parents and his little sister.

Besides, he is an American national and belongs to the Ashkenazi Jewish ethnicity as both his parents are Jewish.

Jack Has One Sibling

Jack is the first-born child of his parents. He has a little sister named Darby Rudd who was born 4 years after him in 2010. Jack’s sister Darby is currently 12 years old and is a school student.

Needless to say that the brother-sister duo does shares an adorable relationship like any other common sibling.

Both of Jack Sullivan Rudd’s Parents Are Into Movies

As we all know, his father Paul is an established Hollywood actor. Paul made his acting debut in 1991 and since then he has been continuously working as an actor till today. In his three decades of an acting career, he has played numerous roles in movies and series like Sisters, Halloween: The Curse of Michael Myers, Wanderlust, Living with Yourself, and many others.

On the other hand, his mom Julie Yaeger also works in Hollywood and is a screenwriter and producer. She has mostly worked behind the camera. Jack’s mother began her career in the movie industry in 1997 as a unit publicist for the movies Mr. Jealousy and Niagara, Niagara.

Talking more about his mom, she also appeared as the assistant of Ms. Fiorentino in the 1997 movie Men in Black. After 8 years, she evolved as an executive producer and produced the TV series The Suite with Dave Karger. Aside from all these, she is also a screenwriter for the 2017 movie, Fun Mom Dinner.

Is Paul Rudd’s Son an Actor? Is he related to Jack Sullivan in the movie Christmas Under Wraps?

At the moment, 14-year-old Jack is a high school student in Rhinebeck, New York. To date, he has not started his professional career which means that Rudd has not acted in any movies and TV series at least till the year 2022. Who knows, in the future, he might choose to become an actor.

Further, in regard to the 2014 TV movie Christmas Under Wraps, it has no connection with Paul Rudd’s son Jack Sullivan. Instead, as per IMDb, the movie is made in the loving memory of Jack Sullivan (who seems like the assistant director of the 1936 historical adventure movie The Charge of the Light Brigade).

As said earlier, Jack is currently in high school. Though it’s pretty much common for a high school student to stay in a relationship, in the case of this enigmatic youngster Rudd, no information about his love life is available. Further, due to his absence from social media handles, his personal life is difficult to trace.

So, at present, rather to talk about his love life, it is safe to say that Jack is more consumed with his education and hobbies.

Rudd Is A Great Football Lover

The celebrity kid is a football enthusiast and is a supporter of an American football team Kansas City Chiefs.

Back in 2020, he even joined his famous dad at the Super Bowl LIV and both the dad-son duo cheered for their favorite team Kansas. After the team won, in an exclusive talk with Fox, his dad stated, “It feels like I’m seeing colors for the first time in my life”. Agreeing with his dad, Rudd also told,

“It doesn’t even feel real.”

In the meantime, the teenager was so overwhelmed by his team’s victory that he didn’t even notice his bleeding nose. Regarding this, his dad told,

“Poor Jack got a nosebleed he was so excited

“I have a bloody nose! “I didn’t even know when it happened.”

Being a great admirer of the football game, Jack barely misses any chance to watch it. Most of the time, he sees together with his dad cheering for their favorite team.

Sullivan is A Big Fan Of The Marvel Franchise As Well

Apart from games, when it comes to movies, Jack is a fan of the Marvel franchise. 3 years back, at the premiere of Living with Yourself, his actor dad Paul disclosed that not only his son Jack but his little daughter is also a fan of Marvel. He told,

[They’re] big Marvel fans,” “They’re excited to see all of the movies and truthfully just want to know what Tom Holland is like. Really at the end of the day, I’m just their dad.”

Seeing this statement, it is also clear that Rudd doesn’t only admire the Marvel franchise but is also a fan of the actor Tom Holland.

Jack Sullivan Rudd Is Not On Social Media

In the present era, it’s common for people to be on social networking sites. However, Jack does not seem to be active on social media, unlike any other celeb child. But, in past, he had a verified Instagram account with over 10k followers.