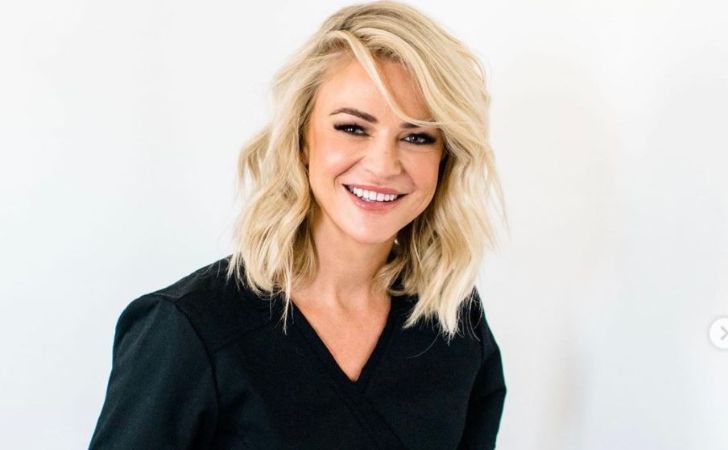 Katherine Hough is an American entrepreneur and a professional beautician. Likewise, she is also an actress, known for her work in Footloose. Besides, she is also famous as the older sister of successful American actress and singer Julianne Hough.

Apart from all her professional accomplishments, she is a wife and a mother of three children. Well, who is her husband? When did she tie the knot? In this article, we will talk in detail about Katherine’s career, relationship with parents, siblings, net worth, & many more interesting details.

Continue reading if you want to know.

The beautiful Katherine Hough was born on June 9, 1983, in the United States. She is the daughter of father Bruce Robert Hough, & mother Marriann Hough. As of 2022, she is 39 years of age.

Just in case you didn’t know, her dad is a famous face in Utah. He has been the chairman of the Utah Republic Party twice & is currently a national committeeman of the Republican Party of Utah. Similarly, her mother is an artist by profession.

Her Siblings Are Successful Actors

Katherine grew up in a big family. Apart from herself, she has four other siblings, Sharee Hough, Marabeth Hough, Julianne Hough, Derek Hough. Interestingly, all her siblings are pretty much-established individuals.

In fact, her brother Derek and sister Julianne are popular figures in the entertainment industry. Both her brother and sister are successful actors, singers, and dancers.

Her brother has been the winner of Dancing with the Stars six times. Further, he has also appeared in many other movies and TV series like Better With You, Nashville, High School Musical: The Musical: The Series, & many others.

Talking of Katherine Hough’s sister Julianne, she is popular for her work in movies and TV series like Rock of Ages, Safe Haven, Paradise, Dirty Grandpa, among others.

Like we said earlier, Katherine is a professional beautician. She even runs a skincare service named Skin By Katherine, where she provides all kinds of related to skin, and spa as well. Previously, she worked at the Aveda salon and spa in Nashville, which belonged to one of her sisters Marabeth.

She has been running the business for a while now is apparently pretty successful as well. Besides being an entrepreneur, she is also an actress. Back in 2011, she appeared in a movie named Footloose, where she played Cowboys’ Dancer. However, she has since quit the entertainment industry.

Is Katherine Hough Married? Who Is Her Husband?

Not many know but Katherine is a married woman. She is married to her husband named T.J. Drechsel. But when did the duo tie the knot? Well, unfortunately, the couple has not revealed their wedding date, but it looks like they tied the knot in the mid-2010s. It has already been a few years since they are together.

Katherine’s husband Drechsel is a successful photographer and works at Drechsel Photography. Besides, he is also the Owner and Operator at Drechsel Professional Painting.

The husband and wife seem pretty much in love and they love sharing photos of one another on their respective socials. Hope their marriage continues forever.

While she is married to Drechsel at present, she has had an unsuccessful marriage in the past as well. As per the reports, she was in a marital relationship with her first husband named Tony Phillips.

Unfortunately, things didn’t work between her and the first husband leading to their divorce. They never revealed the exact reason behind their split.

She Is a Mother of Three Children

Well, Katherin is a mother of three daughters. Her first two daughters Ariana and Adilynn were born from her ex-husband. Whereas her third kid Avery Phoenix Drechsel was born with her now-spouse.

Well, she shares a great relationship with all her kids and often shares photos with them together on her socials. Not only this, but Drechsel also has a great bonding with Hough’s kids from her previous relationship.

How Much Is Katherine’s Net Worth?

As a successful entrepreneur and an owner of a successful beauty salon, Katherine undoubtedly makes a decent sum of money. Apart from her business, she also added up a good amount of money from her career as an actress in the past. But when it comes to her net worth, she has been pretty shy from the beginning. However, sources assume, she is at least worth around $1 million in 2022.

Like most celebrities, Hough is very active on social media. She is not only on Instagram but on Facebook as well. On both platforms, she regularly comes up with updates about her life. In fact, she seems to love sharing her dad-to-day on these platforms. Moreover, she also ready has over 21k followers on her Instagram, which is a huge number.