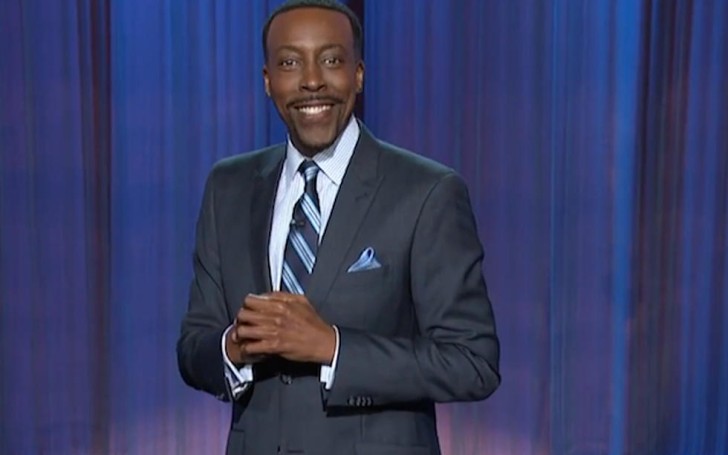 Arsenio Hall is an American TV star famous for hosting the show, The Arsenio Hall Show. His syndicated show ran from 1989 through 1994. However, his run as one of the best talk show hosts was short-lived. He quit the show in 1994 in order to take care of his infant son.

The doting dad sacrificed a lot and raised his son as a single parent. The big question here is, where was Arsenio Hall’s wife while he took care of his baby all by himself. In this topic, we will talk about the identity of Arsenio’s baby’s mama.

Throughout the late ’80s and early ’90s, Arsenio made a name for himself through his talk show, The Arsenio Hall Show. Regardless of his name and fame, the man kept his private life behind closed doors because of which information about his wife or girlfriend is rare.

Upon quitting the show, Hall decided to remain outside the spotlight all because he wanted to raise a family of his own and so he did. He welcomed his first and only child Arsenio Hall Jr. on 30th September, 1999. As for who is the baby mama? She is none other than Arsenio’s own manager and now ex-girlfriend, Cheryl Bonacci.

The pair was in a relationship for several years before going their separate ways. They were never married. There are many tabloids that claim Cheryl is Arsenio Hall’s wife but credible sources state otherwise. Besides, as of 2022, Arsenio remains unmarried. In fact, it looks like he is also not in a romantic relationship as of 2022.

What is Arsenio’s baby’s momma Cheryl doing these days?

As of 2022, Cheryl works as an Independent Consultant at CLB Solutions. She has been working at the firm since February 2018. She first got her big start as the Vice President, Production/Management for Arsenio Hall Communications. Cheryl worked at her ex-boyfriend’s company from Jan 1988 to June 1995.

After leaving the company, she started working as the Chaplain at the Office of Restorative Justice. Moreover, the Indiana native is a St. Mary’s College graduate.

Arsenio Hall Raised his Son as Single Parent: The Joy came with a hefty price

Not many male showbiz stars were successful in raising their child as a single parent but Arsenio sure succeeded in this aspect. As of 2022, his son Arsenio Jr. is 23-years-old and to be honest, his son has grown up to be a great human being, just like his celebrity father. The once chubby kid is as tall as his father and looks quite handsome.

In an op-ed for Newsweek in 2012, Arsenio vividly opened up on the subject of raising a child as a single parent. He said,

“I knew going in that being a single parent would be one of the toughest jobs I’d ever have. I’d been a talk-show host, actor, comic, and on and on, but this gig was going to be my defining moment.”

As for why he chose to raise his son, he explained,

“I was determined to be there for my son’s first walk, talk, boo-boo, and whatever else. I didn’t want to miss a thing.”

Although Arsenio enjoyed the time, he also paid a big price. He had to stay out of his media career for decades just so he can spend more time with his boy. He added, “I turned down many opportunities over the years because I didn’t want to leave him for long periods of time. And in Hollywood, as in any business, the calls stop coming when you don’t answer.”

In 2012, Arsenio got a much-needed break when he entered the reality TV series, The Celebrity Apprentice. He eventually won the fifth installment of the show and received $250,000 prize money which he subsequently donated to the Magic Johnson Foundation. The very next year, he restarted hosting the show, The Arsenio Hall show, however, it only ran for a year.

In 2004, Hall’s former manager and girlfriend Cheryl sued him for not paying the child support she was expected to be paid. Apparently, Cheryl wanted to receive child support on the basis of Hall’s earnings from his time as a host. Back then he used to earn upward of $12 million a year.

On the other hand, Hall maintains that he shouldn’t be asked to pay child support on the basis of what he used to earn, but on how much he earns now. In addition to that, he also asked for a restraining order against his baby’s mother. According to Hall, she somehow interfered with his custodial rights.

Apart from Cheryl, the American actor and presenter was once in a relationship with American singer, Paula Abdul but has never been married to a wife. The duo dated for several years before calling it quits. In an interview with the Parade Magazine, Arsenio talked about his most talked about affair with Paula.

In the conversation, he mentioned that out of all the women he has been with, he had the most fun with Paula. He stated,

“The most fun I’ve ever had in any phase of my life with a woman was with Paula. We were together because we wanted to be. If you’re Janet Jackson, you really don’t know if some scumbag is after you for your paper. But with Paula, we always knew what time it was.”