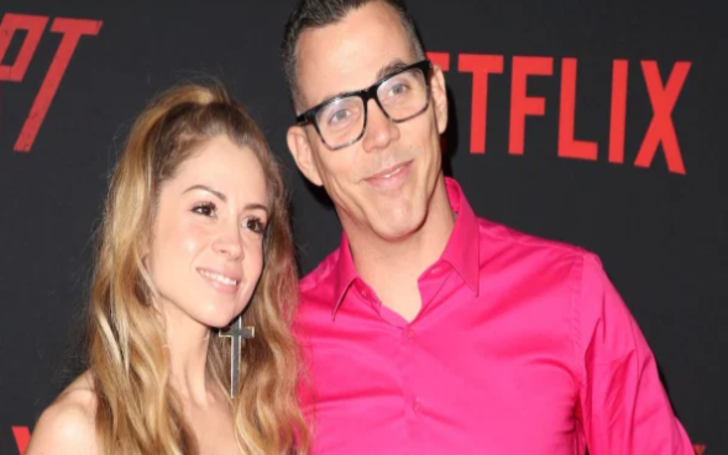 Wright got engaged to Steve-O in January 2018. This is the third time the crazy stunt lover will be walking down an aisle. His fans are also getting really excited about his and Wright’s relationship. The pair seemed extremely made for each other with Lux often agreeing to be part of Steve’s outrageous shenanigans and even sharing the same thought on several life issues.

So, what is it that makes Lux Wright special? Who was she before dating Steve-O? Know all about her stardom far from the fame of her fiance all in the writings below.

Lux Wright Is A Photographer And A Designer

She is a photographer, stylist, and visual artist for movies and commercials. She also served as a producer for her fiance’s movies, No Pain in Vain: The Shocking Life of Steve-O (2020) and Steve-O: Gnarly (2020). In the latter, Wright even appeared as herself.

Lux’s first career as a photographer kicked off in London and Amsterdam in 2015, after which she gained notable recognition. The Golden State resident has traveled to Costa Rica, England, France, Jamaica, Mexico, and the Netherlands. She has also participated in poker tournaments.

Wright first worked as a sales associate for Dolce & Gabanna from Dec 2006 to Apr 2009. After that, she interned as a stylist for Chic Little Devil (Sep 2010 – Feb 2011). In December 2010, the Prop Stylist started to work as an event coordinator for RockSugar Pan Asian Kitchen. She would remain with the company until Feb 2014.

Steve’s girlfriend would again work as a sales associate, only this time for Nest Studio Rentals. After about one and a half years, the designer became an independent contractor for film and composition working from Los Angeles. She also owns Depop, an online store for men’s and women’s wear, jewelry, beauty, and more.

Wright loves vintage cars something that she has shown throughout her Instagram. She also is fond of watching UFC along with her soon-to-be husband.

Wright and Steve met on a job. The former was working in production design, styling prop, and wardrobe while the latter was there to do a particular job (though unspecified). Ironically, the MTV stunt man never finished his task but still got the paycheck. They eventually had their first conversation but it was Wright who asked him out. The couple then went on a few dates did things “pretty responsibly and conventionally.”
They began their relationship in January 2017. Later that year in July the pair went public with their relationship.
The Wildboyz star asked Lux to marry him on January 21, 2018, in front of some of his Jackass co-stars, his dad, and his sisters. He also filmed the entire thing. In fact, he got on his knees onstage at the end of a comedy special he was filming in Denver with his “Jackass” buddies and family in the audience
Afterward, Wright took to her Instagram to share an up-close image of her ring and the excitement. In the caption, she joked ‘marrying the MTV celebrity is a total no-brainer.’
Steve claims Lux was a huge influence in helping him achieve sobriety. The Jackass alum has been open about his past struggles with substance abuse and has been living sober since 2008.
Gilchrist and Lux pushed back their wedding date, due to the coronavirus pandemic. The couple resides in Hollywood Hills with their four dogs, two cats, and three goats.

Glover was previously in a relationship with Candy-Jane Tucker from 2002 to 2003 and was the husband of Brittany Mcgraw from 2006 to 2008. Three years prior to proposing Wright, Steve was dating Stacey Solomon. He also dated Kat Von D in 2015. The two, however, split after three months of dating.

Steve said it was a goal of his and he really found one in Lux. Glover also explained that he chose the ring because it wouldn’t get in the way of his beloved’s work, since as a visual artist, she frequently works with her hands.

They Didn’t Kiss For The First Month

Wright and the Professional Idiot’s writer didn’t have a physical connection for the first month of their dating. They went as far as not to kiss each other until they had moved in together.

“We took a whole month of dating and no physical action,”

“We then had our first kiss and kissed each other’s peepees and we lived together ever since,”

The Gonzo star and his visual artist future wife, Wright — want to create their own animal sanctuary. Lux’s fiance is a vegan and the idea of having a barn came to him when he was in Morocco with his friend, Scott Randolph.
The animal rights activist said — during his visit to the country, he realized how he had everything and that Wright and he didn’t want to have kids (more down below). O talked about it with Scott and the friend suggested the reality star open an animal sanctuary.

“And then my head exploded. I just got too excited,” said the British-born actor,”

the Bailey graduate told to Graham Bensinger. Lux, likewise, pronounced, how thrilled she became when Steve proposed the idea to her. The prop artist said,

The couple agreed they wanted to have it in Southern California so they can drive to it. They also hoped the sanctuary has a bed and breakfast facility for visitors. Wright and Stephen wish, with their ranch, people will be able to change their thought about meat-eating. Lux and her fiance said they aspire to help kids with conditions with the revenue they gather from their barn.
The couple is pretty serious about their ranch so much so that they have decided to get married on it and nowhere else. Also, the reason, why Wright and her boyfriend are yet to share their wedding news.

The month Steve proposed to Wright, he also had rescued a street dog from Peru and even brought her back to the States with him. Later that year, Gilchrist and several of his friends helped to detain wild tortoise poachers in Africa.

Lux Wright Doesn’t Want To Have Kids; So Does Steve-O

Lux and her fiance, Steve-O — are among the growing number of people who have all but committed to voluntarily childlessness. The duo has been pretty vocal and bold with their thought to remain kids-free.

The Jackass star says he had thought about not having his own offspring way back in his late 20s or early 30s. At one time, Steve even discussed having a vasectomy Olympics with his father. Although his dad tried to talk him out of it, the prankster remained adamant about his choice.

Luckily for him, Wright is also very much on the same page when it comes to parenthood.

“I think most people feel strongly about having children and think it is important. But I just can’t really tell that. I’ve never wanted kids. I’ve never had that desire,”

Wright declared her perception of having children. She added having kids is a huge commitment ‘not to mention financially, probably the most expensive thing you’ll ever do.’
The designer further said, “I’ve planned a lot for myself, and none of that has ever included having kids.”  The soon-to-be bride of Stephen, nonetheless, admitted if she ever gets to that point where she feels otherwise, adoption is the least she would be happy to do about.

Wright Initially Had A Problem With Her Fiance’s Nudity

While Lux 34 is the most laidback fiancée out there for Steve, there have been limits as to what she was okay for regarding the stunt performer’s affinity to bizarreness. Glover’s full-frontal male nudity was something that she wasn’t okay with. Jackass alum found it to be shocking at first.

“She told me ‘We’re in an intimate relationship, so I feel like that’s my penis, and I don’t like you showing it to the whole world,” Stephen explained about his fiancee’s problem of his nudity.

Later, the couple sorted out the issue of Steve-O’s full-frontal nudity. Lux even agreed to paint his p**** for a dick painting stunt he was doing. The triple passport holder said that represented her kind of accepting the situation.

In February 2017, the prop maker, through her Instagram, revealed she had her dermal inclusion cyst removed. Wright further said that she had the abscess since the mid-2000s. The Californian explained it was non-cancerous and the whole procedure was ‘pretty fun for me!’ She, however, didn’t mention from which part of her body it was cut out off. Wright also suffers from frequent nose bleeding.