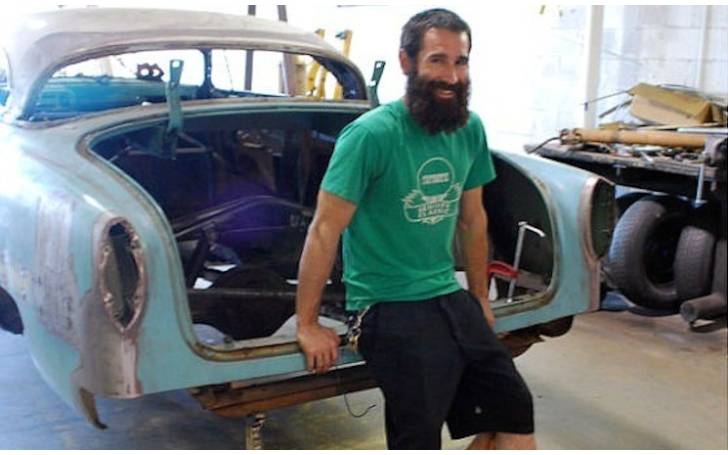 Aaron Kaufman is an American mechanic turned TV star, who is famous for his work in Fast N’ Loud. In the series, he appeared together with Richard Rawling.

Kaufman starred in the series since its debut in 2012. However, his longtime run in the show ended in 2018 after he quit the show due to some reasons.

That being said, while Aaron has left the show, fans are still curious to know about what is Aaron Kaufman doing nowadays? Let’s find all the answers including about his early life and more!

Aaron Kaufman is a Texas boy

He was born on January 26th, 1982, in Texas. He is the son of David Gerald and Lisa Stewart Kaufman. Aaron belongs to the Caucasian ethnicity and has American nationality.

His parents brought him up in Crowley, Texas along with his brother. Yes, Aaron has one sibling named Jaret Brett Kaufman.

Besides, Aaron finished his high school education at a local school in Crowley.

We all know that fathers play a pivotal part when it comes to sparking different types of hobbies in their kids. Likewise, when Aaron was young it was his dad who instilled in him the essence of automation.

His father David is a maintenance mechanic who taught himself the art of automation. David transferred his love for cars into his son Aaron from which he carved out a career for himself.

Aaron started fidgeting around with cars at an early age. As his father owned his own garage, Kaufman had a lot of time to experiment as much as he pleased.

He worked as the lead mechanic for Gas Monkey Garage

Many of you might already be aware of the fact that Aaron worked as a mechanic at Gas Monkey Garage. The Dallas-based garage is all about repairing and modifying broken or tired-down cars and sell them for higher profit.

Aaron started out as a small mechanic before eventually becoming the shop’s main mechanic. You can say, after Richard Rawlings, who is the owner of the shop, it’s Aaron who took over the big responsibilities.

He worked at the shop for more than a decade before calling it quit in 2018.

When Discovery first released the series Fast N’ Loud, Aaron alongside Richard and other crew of the Gas Monkey Garage. As soon as the series debuted, it became an instant hit amongst car enthusiasts.

Ever since he made his appearance in the show, he grew his own set of fanbase. This is why when Aaron left the show for good in 2018, many of us were shocked and sad at the same time.

Well, technically, Kaufman didn’t let leave the Discover show. He quit his job at Gas Monkey Garage which is the main subject of the show, Fast N’ Loud.

In 2018, his split from the garage came out of nowhere as fans never expected it to happen. While explaining his big decision, Aaron mentioned he left the show in order to go his own way.

He further stated, “My vacation from Gas Monkey is going to be a permanent one. I need to make a permanent split, it’s time for me to go.”

Apart from that, Aaron also revealed that he left the show because of a lack of creative control. You see Aaron here is a Ford F-100 fanatic so continuously modifying smaller cars wasn’t exactly his forte. He wanted to play around with bigger cars but the show didn’t allow him to do that as the demand for smaller cars was more prevalent.

What is Aaron Kaufman doing nowadays?

Despite leaving Fast N’ Loud, Aaron is still working with the discovery network. Yes, he has his own show titled Aaron Needs a Job. In the show, he takes fans on a journey throughout the country where he meets new people from the automotive industry and explores new industries.

Who is Aaron Kaufman wife?

It’s good news for you ladies as this hot mechanic isn’t married to anyone yet so there’s no question about his wife. But that being said, he does have a girlfriend whom he has been dating for quite some time.

Since 2013, Kaufman is in a relationship with Lauren Moore Knob. The duo first made their relationship official after appearing together as a couple in a 14th season episode of Fast N’ Loud.

Further, Aaron and Lauren seem to have an incredible bond with each other. They often feature with each other on their respective social media account, though Lauren has kept hers private nowadays.

Meanwhile, the pair doesn’t share any biological children between them. Nevertheless, they have two pet dogs, Lola and Lizzies.

Before dating Lauren, Aaron was in a relationship with a woman named Lindsay.

How much is Aaron Kaufman’s net worth?

From his appearance in the series Fast N’ Loud, Aaron raked in a good amount of money. If online reports are to be believed, his overall net worth is around $8 million.

After leaving the show, Aaron also started his own fabrication company which also helps him earn a decent amount of money.