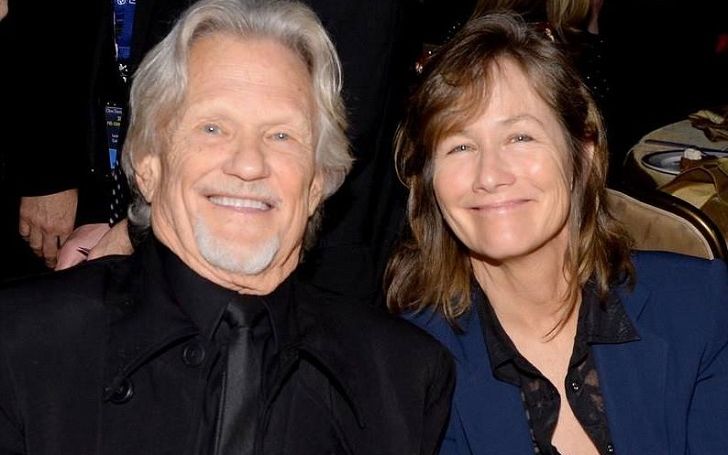 Lisa Meyers rose to stardom as the wife of Kris Kristofferson, one of the legendary artists in the music world. He also has tried his hands at acting appearing in both movies and TV shows; some notable projects include Blume in Love and Alice Doesn’t Live Here Anymore as well.

Talking about their marriage, Lisa and Kris have been married for nearly four decades. The enduring pair also have five children together. Besides, before the duo crossed paths, they both were divorcees.

In this article, we will also talk about Lisa’s professional endeavors and more!

How old is Lisa Meyers? Her Date of Birth and Early Details

Meyers was born on 29th September 1956, in Los Angeles, California. She spent the majority of her early days in L.A. along with her family. However, the famed celebrity spouse has kept most of her early details including her parents and more under wraps.

Lisa is an American as per her nationality and belongs to the Caucasian ethnicity.

She Studied Law at College

Apparently, many reports also say that Kris’ wife is also a hairstylist and has already worked in various movie productions. However, as per the IMDb page, the hairstylist Lisa Meyers is a different person.

The future duo first came across at a gymnasium back in 1982. Kris, the ‘Me and Bobby McGee’ songwriter who already went through two failed marriages wasn’t too ready to jump into a new relationship with Lisa. The artist recalled to the Independent,

“I was a bachelor father at the time and I told her: ‘I take a little girl to school and I pick her up at the end of the day and then we go do whatever she wants to do and I haven’t got room for anything else.’ That’s how it all started for Lisa and me.”

“We met at the gymnasium and we were looking at each other and I borrowed a piece of equipment off her, which was a ploy, I guess, because I saw something there that was promising.”

Despite his initial reluctance to begin a new relationship, Kris eventually began dating Lisa. The two dated for months before they tied the knot.

When did they get married? Their secret wedding

Lisa and Kris exchanged their vows in 1983, a year after their encounter at the gym. They walked down the aisle in a small private ceremony in the chapel of Pepperdine University. Sources say, only their family members and close friends were present at the ceremony.

As for their honeymoon, the duo postponed their plan because of their busy schedules as Lisa was preparing for a bar exam while her husband was busy on his new album.

Besides, the two also share huge age differences of 20 years. Despite the considerable gap in their age, they are still leading a blissful marital relationship making their unbreakable bond more strong.

Lisa Meyers is the Mother of Five Children

Kris Kristofferson’s wife gave birth to their first child, a son named Jesse Kristofferson in the same year they tied the knot in 1983. Two years later, they became parents for the second time, welcoming a son Jody Kristofferson. Their three kids include Johnny (born in 1988), Kelly Marie (born in 1990), and Blake (born in 1994).

In the same interview with the Independent, the artist told he is grateful to have such a loving family,

“The kids now come with me and Lisa wherever I’m working, and they are a joy all the time. Looking back, I really have to say I’m not sure I would change anything. Because something, especially over at least the last 15 years, has finally made my life perfect. My family, in particular, is the best thing in my life.”

Lisa Meyers is a Supportive Wife

In the past few decades, her spouse Kris faced a series of serious health problems including a successful bypass surgery in 1999. However, the artist suffered from Lyme disease for over a decade from 2004-2015. But, his spouse Lisa supported her man throughout his hard times.

Back in an interview with Huffington Post, the former law student talked about their light-hearted humor to keep Kris in high spirits,

“We understand Kris’s deficits in spatial awareness and short-term memory loss and we laugh about it all the time. We laugh at him and with him and we make the best of it because Lyme is so tragic that if you don’t have something to counterbalance the sadness of that, it’ll take you down.”

Lisa who still relishes long walks with her musician hubby was already married to an unknown guy in the past. Although Meyers never talked about her first husband, some reliable online tabloids say Lisa was in a relationship with him for a few years.

Don’t Miss: List of 10 Most Handsome Actor In The World

In the meantime, Kris was married twice before meeting Lisa. He first tied the knot with Fran Beer. The former flames also share two children, a daughter Tracy and a son Kris. The two married for around a decade before they went their separate ways. The artist for the second time went on to marry Rita Coolidge. They welcomed their daughter Casey in 1974. Nonetheless, their marriage also dissolved in divorce in 1980.

Where Does Lisa Meyers Live? Her Net Worth Details

Lisa currently resides in a Japanese-inspired home located in Maui, Hawaii with her husband and children. They also own a house in Malibu.

Talking about her wealth, Lisa has a net worth of $500,000. Besides, her long-time partner Kris has an estimated net worth of $160 million. He has collected such a tremendous figure of wealth from his prolific career in both music and wealth.