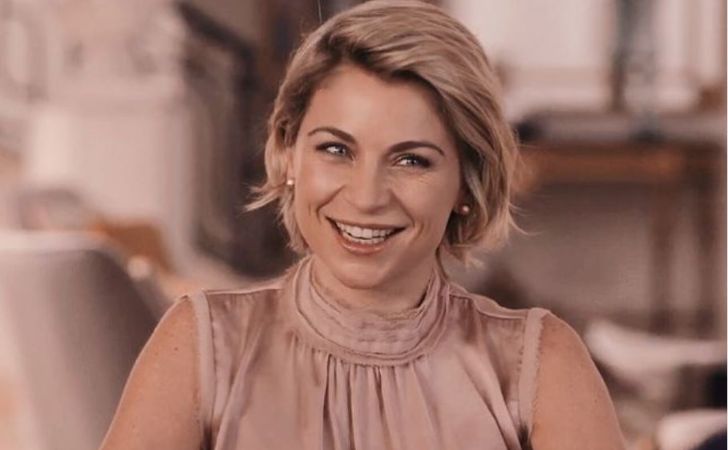 Ludwika Paleta is a Polish-Mexican actress and producer. She is very popular for her role in movies and TV series like Seis días en la oscuridad, Volando bajo, Duelo de pasiones, and many others.

Starting out her career in acting in the early 1990s, Ludwika has achieved a lot professionally. But when it comes to her personal life, she has faced a few hurdles along the way. She has gone through a few unsuccessful relationships and has even married twice. Besides, she is also a mother to one son.

Well, here are several other details about Ludwika that are still unexplored. But in this article, we are going to explore everything about her career, parents, boyfriend, children, and many more.

Ludwika Paleta Was Born in Poland

The successful actress Ludwika Paleta was born on November 29, 1978, in Kraków, Poland, to father Zbigniew Paleta and mother Barbara Paciorek Paleta. While her father was a musician, her mother was a schoolteacher.

Though Paleta was born in Kraków, she spent her childhood mostly in Mexico as her father settled in Mexico because he was offered a good job. Well, she had quite a decent upbringing and was creatively inclined, also because of her father’s profession as a musician.

Besides, she also has an older sister Dominika Paleta, who took care of her mostly during her growing up years.

With her father being a singer and musician, Ludwika was always creatively inclined in one way or the other. But since there was no one in her family who was into acting, she never considered being an actress until her sister Dominika forced her to audition for a role.

As per reports, when she was still a child, her sister took her to an acting audition. As fate would have it, Paleta impressed the casting directors and got the role in a children’s telenovela Carrusel. The telenovela became a huge success and her role as María Joaquina Villaseñor grasped huge attention making her a celebrity.

After her first role, she took 3 years before making a comeback with a TV role in the adventure drama El abuelo y yo. With her role, she became very popular in the public and media, eventually gathering roles in TV series like Humble Maria, Hurricane, Amigas y rivales, Niña… amada mía. With all these roles one after another, Ludwika also developed an image of a sex symbol.

Talking about her recent works, she has appeared in TV series like La querida del Centauro, Rubirosa, Madre sólo hay dos. All of her works have been decently successful continuing her legacy.

She Is Married Twice with Children

If you didn’t know, Ludwika is married twice. She was first married to a Mexican actor Plutarco Haza. They married in 1998, in a beautiful wedding ceremony. From the marital relationship, the couple also welcomed a son named Nicolás Haza, on November 11, 1999.

Despite being married for over 9 years, their relationship wasn’t meant to last and they finally called it quits. They divorced in 2008, however, they did not reveal the exact reason behind their split. Then again, they stated they had decided to separate for a while. Talking to People, the duo stated,

“We’ve decided to separate for some time now. This will be the first and only time we talk about this, and ask that people respect our privacy, in the best interest of our son.”

Talking of the conflicts in their relationship, they started having problems as a couple after Haza’s intimate photos with another lady were leaked. Before this, the couple had also briefly separated back in 2002 for unrevealed reasons.

Ludwika Paleta Married For The Second Time To Emiliano Salinas

The Volando bajo married for the second time to her current husband Emiliano Salinas. They walked down the aisle on April 20, 2013, near Mérida, Yucatán, México. Their wedding was a beautiful ceremony with mostly their close friends and family members attending the ceremony.

But who is Paleta’s husband Emiliano Salinas? Well, he is a venture capitalist and businessman and the son of former Mexican president Carlos Salinas de Gortari and former Mexican first lady Cecilia Occelli.

As of 2023, it has been over 10 years since they tied the knot and they are going as smoothly as ever. From their years-long marital relationship, they have twins, Barbara and Sebastian. She shares a great relationship with both kids.

Has Had Short-Term Love Affairs

Prior to her marriage for the second time, Ludwika also had a few boyfriends. Shortly after her first marriage ended, she was spotted kissing singer Pablo Montero in a restaurant. The duo never became very public about their relationship, which was very much short-lived.

Later, in 2008, she got romantically involved with Cuban actor Alberto Guerra. The ex-couple were together for 2 years until their split in 2010.

Appeared On The Cover Of Renowned Magazines

Apart from all the acting credits, Ludwika Paleta has also had the honor to be on the cover of several magazines. The actress once appeared on the cover of a renowned Mexican magazine H para Hombres.

Along with being on the cover of magazines, she also was one of the spokespeople for Calvin Klein along with actor Aaron Diaz. Further, she also starred in the Mexican telenovela Abismo de pasion, just as a special appearance.