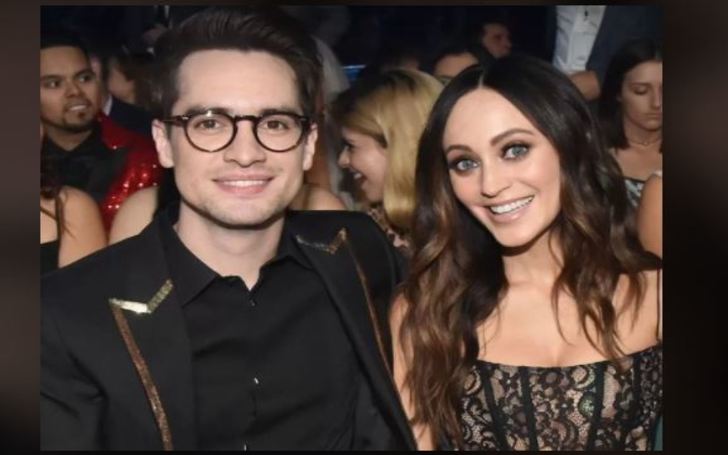 Sarah Urie (nee, Sarah Orzechowski; Oh-Juh-Husky) is the wife of singer, songwriter, and musician, Brendon Urie. Individually, she is an esthetician and skincare enthusiast. Sarah’s husband, Brendon is best known as the lead vocalist of Panic! at the Disco. Many of his songs have achieved commercial success, ranking among the high spots on Billboard charts and millions of sales with some receiving multi-platinum.

The brunette-haired and the doll-blue-eyed wife of Brendon has had a soaring liking especially in the world of social media. With just a handful of posts, she is about to become a star with millions of followers.

So what is so special about Brendon Urie’s wife, Sarah Urie? Is she also a star like her husband? Is the amount of fame more than Brendon’s? Also, how did the two met? Do they have children? Know all these in the discussions below.

Sarah Urie Is Of Michigan

Sarah Urie was born Sarah Orzechowski on February 23, 1987, in Detroit, Michigan. She is of Polish and Irish descent. She once revealed she was a natural blonde. Her hair started to turn light brown when she was in the 6th grade. Sarah has a brother named, Steve.

Brendon’s spouse studied at the Lutheran High School Westland from 2001 to 2005; she was also on the track team. After that, she went to the Michigan College of Beauty – Troy to study Esthetics.

Sarah Urie Is An Esthetician

More precisely, she is an advocate of organic products. The Michigan native received her license in skincare in 2010.
In addition to the skincare routine, Sarah also posts about beauty and fashion tips.

What’s more, she also uses her socials for philanthropic purposes. In the aftermath of Hurricane Matthew in Haiti,
Brendon’s partner used her social media handles to make urge her fans to donate to the victims.

Sarah is also a user of the video hosting service Vine.  She loves Netflix Orange Is The New Black.

She Has One Series Appearance

She also made an appearance in a series titled, Good Cops (2011-present). In this comedy series, Sarah portrayed the character of Crow Ninja for one episode in the year, 2013.

Sarah Is Married To Panic! At The Disco Vocalist, Brendon Urie

Sarah married her husband, Urie on 27 April 2013. The couple met through the lead singer of the Paramore band, Hayley Williams in May 2008 after Sarah and Williams saw Panic! At The Disco show in Fillmore, Detroit, during the Pretty. Odd tour.

However, not much happened afterward. In fact, as per some sources, after Michigan, they didn’t stumble upon each other for quite some time. Also, when Ms. Urie met her now singer husband, she was dating Jeremy Davis of Paramore.

Then 8 months afterward, Hayley re-introduced the esthetician and the musician. This time, Sarah was single, and the future couple hit it off.

They got engaged in September 2011 and after 19 months tied the knot at the Sadderlock Ranch in Malibu, California on the 27th of April 2013. The bride had her dress from Vera Wang. The couple had Megan Gray of Honey and Poppies as their florist.

Art is for lovers, a wedding organizing services coordinated the ceremony for the couple. The bride presented the groom with a beautiful gift of a vintage dresser to be used as a bar.

Brendon wrote the song, Sarah Smiles, for his influencer wife. While talking with Spin, the lead vocalist said he scripted the song to try and impress her. The artist admitted he was infatuated with her. Brendon eventually played it for her and soon after they began dating.

In like manner, Sarah has inspired several Panic! at the Disco songs. As such, she was the main inspiration behind the album Death of a Bachelor. The album narrates the transition in lifestyle that Urie experienced after marrying and settling down with his esthetician wife.

Does Sarah Urie Have Children?

The five-foot-eight inches tall, Sarah Urie has been with her husband, Brendon for more than a decade, yet they are still to become parents. Brendon once explained his primary focus has been his career and spending time with his wife. He, however, stated that he and his influencer wife are open to the possibility of having kids.

As for Sarah, she has Twitter-ly defined herself as a puppy mom; she has two of them named Penny and Bogart.

Sarah’s partner, Brendon Urie isn’t shy about speaking about his sexuality, and nor his wife’s.

In an interview with Between the Lines, the lead vocalist admitted his wife, Sarah finds other women wooing. In the same sitting, he also confessed that he, himself had experimented with homosexuality in the past, but had always found women more attractive.

“It’s really kind of loosely based on the majority of relationships I’ve been in, even now with my wife. Yeah, she’s attracted to girls,”

Brendon likewise added how he thinks some men are extremely attractive and he doesn’t want to hide the fact. He claimed he had no shame in it and liked being able to shed some light on that.

As per some, the couple has also been reported to be in a polyamorous relationship at some point in their life

Unlike her, rockstar husband’s net worth which is estimated to be at over tens of millions of dollars (approx, $12million), specifics relating to Sarah’s wealth are yet to have a credible assessment.

The wife of a four-time Platinum winner, however, is believed to be earning in six figures all as an Internet influencer with her over 1million followers across all social media platforms.

And since it is about money, it might be worth mentioning that in Aug 2014, Sarah’s multimillionaire husband bought a 1,935 square feet home in Encino for $1.17 million.