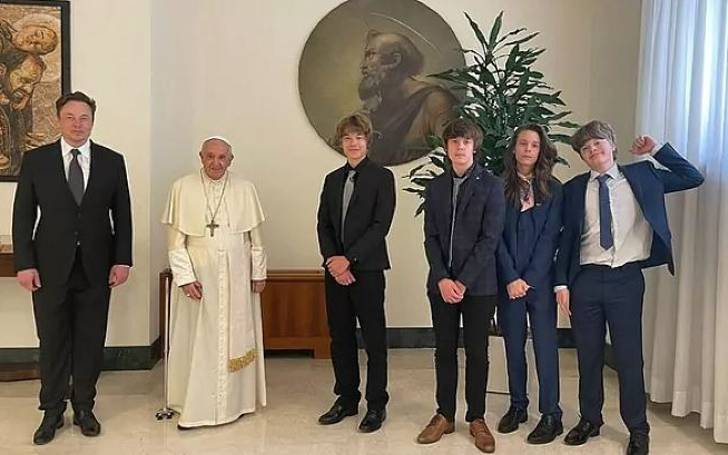 Saxon Musk is a famous celebrity kid who is popular for being the son of business tycoon Elon Musk. His father, Elon is an entrepreneur and engineer who is recognized for being the founder of the American aerospace manufacturer and space transport service company Space X. Moreover, Musk who is the CEO of Tesla Motors has also earned the tag of one of the richest men in the world with a total net worth of $271 billion in 2022.

Besides, Saxon’s mother Justine Musk (aka Jennifer Justine Wilson) is also a well-known Canadian author. She is mostly known for her contemporary fantasy novel BloodAngel. Well, knowing his parent’s status it is evident that Saxon must have had a lavish lifestyle. Apart from his lifestyle, what’s more, is there to wonder about this rich kid?

In this article, we will address every unknown detail of Elon Musk’s son Saxon along with his birth details, family background, and education as well. Let’s explore everything!

What Is The Age Of Saxon Musk? Details On His Birth Through IVF

As of 2022, Elon Musk’s son, Saxon is 16 years old boy. He was born on January 1, 2006, in California, USA. Musk is one of the triplet sons of his parents who were conceived through In Vitro Fertilization (IVF). Then, would you want to know why his parents chose the IVF method to give birth to their kids?

The answer is that Saxon’s parents came up with the idea of IVF was the trauma that they faced in the past after their first child Nevada who was born in a natural way died in hospital at just 10 weeks. A couple of months after their child’s death, the ex-duo decided to have babies through IVF. In this regard, Saxon’s mother once said,

” I buried my feelings instead, coping with Nevada’s death by making my first visit to an IVF clinic less than two months later. Elon and I planned to get pregnant again as swiftly as possible.

Not only Saxon but his other four biological brothers were also birthed through IVF. Besides, the star kid belongs to mixed ethnicity and has American nationality.

Where Does Saxon Musk Go to the School? His Educational Details

Moving on to his education, Saxon’s schooling life is different in comparison to other kids of his age. While most of the kids attend the local school to gain a formal education, Saxon goes to the school which is founded by his own father, Elon.

In 2014, his dad in cooperation with a former teacher of Mirman school, Joshua Dahn founded a school named Ad Astra School, an innovative school that debunks every idea of what a school should look like. There are no more than 40 students including Saxon’s siblings and the kids of SpaceX’s staff in Ad Astra.

In this academic institution, Saxon along with his classmates studies applied science, Artificial Intelligence, design, and coding rather than common curricula like dancing, music, and language. Thus, his father Elon has a motive to start a new education system so that the children can learn as per their abilities. He once said,

As we said, a 16-year-old Saxon rose to fame because of his parents. In fact, Musk comes from a family where not only his parents but his grandparents also endured great success in their time. Saxon’s grandfather Errol Musk was an electromechanical engineer, pilot, sailor, consultant, and property developer.

Further, his grandmother Maye Musk was a model and dietitian. Likewise, Maye was a finalist in Miss South Africa in 1969.

His parents’ Elon and Justine tied the knot in January 2000. The couple, for the first time, came across each other at Queen’s University in Ontario, Canada. Their love story began after Elon consistently approached her multiple times.

Despite his initial immense love and commitment, Justine started noticing differences in her husband’s attitude right after their marriage. She said,

The vast economic imbalance between us, meant that in the months following our wedding, a certain dynamic began to take hold. Elon’s judgment overruled mine, and he was constantly remarking on the ways he found me lacking. “I am your wife,” I told him repeatedly, “not your employee.”

The former couple was together for 8 years before Saxon’s mother Justine announced her divorce from her husband on September 13, 2008. They both shared equal custody of the children.

Altogether, Saxon has nine siblings- five biological and four half from his father’s three different relationships. His oldest brother was Nevada Alexander Musk who died of Sudden Infant Death Syndrome at the age of 10 weeks.

Furthermore, Musk has twin brothers named Griffin and Xavier Musk, born in April 2004. However, Xavier came out as a transgender woman in June 2022 and also changed her name to Vivian Jenna Wilson. Additionally, Saxon has two more brothers named Kai and Damian who were born triplets with him.

He Has Four Half-Sibling

From his father’s relationship with singer and songwriter Grimes (aka Claire Voucher), Saxon has two half-siblings named X Æ A-12 and Exa Dark Sideræl. Furthermore, the star kid from his daddy’s secret affairs with Shivon Zills also has twin siblings whose names are unknown.

Saxon Musk’s career: What He Is Currently Into?

A 16-year-old kid is a student in school which is why he is more focused on his studies rather than pursuing a career. There is a lot of time for him to indulge himself in some fields professionally.

However, as per his celebrity father, Elon’s Twitter, Saxon seems to be interested in inventing video games in his daddy’s factory. The multi-billionaire wrote on his Twitter,

Who knows, in the future maybe Saxon is thinking to pursue his career in video game designing but right now, Saxon hasn’t been involved in anything.

Is Saxon Musk In Relationship In 2022?

Elon Musk’s son Saxon seems to be a little bit secretive about his personal life. So, it is hard to say anything about his private affairs. Even so, Saxon has just reached sixteen so obviously, he is more into his studies.

Hence, considering his age and his tendency to keep things private, we can just make an assumption that in 2022 Saxon is not in any love affairs.

Is Saxon Musk On Instagram? His Other Social Media Handles

Moving further on his social media handles, Tesla’s founder’s son Saxon is on Instagram with an intro “Those who know me follow me, and those who don’t know me don’t follow me.” His Instagram account is private but has 1458 followers and 10 posts in total.

What Is Saxon Musk’s Net Worth?

In 2022, Junior Musk is enjoying his student life. So, it can be said he is currently totally dependent on the wealth of his parents. That’s why his net worth is yet to be estimated.

Saxon previously resided in his father’s multi-million dollar homes located in Bel Air, Los Angeles, California. His richest dad had four mansions there but he sold all of them in 2020 for a combined $62 million.