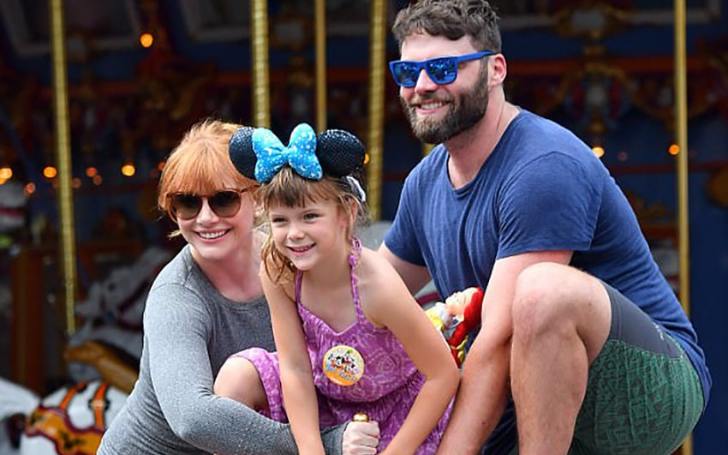 Beatrice Jean Howard-Gabel is known as a daughter of a famous American actress and director Bryce Dallas Howard. Her mother Howard is most popular as Claire Dearing in the adventurous 2015 film Jurassic World and Its sequels Jurassic World: Fallen Kingdom (2018), and Jurassic World Dominion (2022).

Likewise, Beatrice is equally recognized through her father Seth Gabel who is also a well-known actor in the American Entertainment Industry. Gabel is known for his character as an agent Lincoln Lee on the TV series Fringe, Cotton Mather on Salem, and Adrian Moore on Nip/Tuck. As a daughter of such well-known faces in Hollywood, people are really curious to know what the inside life of Beatrice and Seth’s daughter is.

So, today, in this article we are intending to explore everything about Bryce Dallas and Seth Gabel’s beautiful daughter, Beatrice Jean Howard-Gabel. Read the article till the end.

Beatrice Jean Howard-Gabel Was Born In Canada: Her Birth Details

Beatrice was born on the 19th of January 2012 in Vancouver, Canada. At the time of her birth, her father was in Canada for his show Fringe which was in production in Canada in January 2012 while Jean’s mother was accompanying her husband and was residing near the Fringe set.

While talking about Beatrice’s birth to US Weekly, her dad said,

I knew that she could go into labor at any minute, and we were in a different country so I didn’t know if everything was going to work out well, it was a lot of stress,” We weren’t positive that the hospital was even going to accept us!”

Though the situation during her birth time was seen as a bit tough to her parents, Beatrice came to this world with so much light in her parent’s life. During her birth, she weighed 8lbs 60z. In 2022, Beatrice Jean is already 10 years of age.

She is the granddaughter of famous American actor, producer, screenwriter, and director Ron Howard. Ron, due to his great contributions to American film, was honored with multiple awards like the Academy Award, and the National Medal of Arts. He was also inducted into the Television Hall of Fame and earned two stars on the Hollywood Walk of Fame.

Her Ethnicity And Education

A Canada-born celebrity child is of mixed ethnicity. Her father has German, English, Scottish, Irish, remote French, and Dutch in his ancestry, and the case is no different with her mother as well.

Now, as for her education, she surely is a school student. Her mother’s post, on September 5, 2018, which said, “First Grade! 😢 but also PHEW!😂” reveals that she started her primary level study in 2018. Counting on this, in 2022, she is on the verge to enter middle school.

Beatrice Has A Older Brother

In case, if you don’t know, Beatrice Jean Howard-Gabel is not the only child of her parents. She has a big brother named Theodore Norman Howard-Gabel who was born on February 16, 2007. Now, in 2022, her only sibling is 15 years of age and has an interest in watching movies.

Her brother is a huge fan of her mother’s movie, Jurrasic World.

After the birth of Beatrice’s brother Theo, her mom Bryce Dallas suffered from depression. Just 7 days after her marriage, she found out that she is carrying a baby and when her first child was born, it got even more difficult for her to take care of the baby. She said breastfeeding was another challenge for her.

“I felt I was failing at breast-feeding. My house was a mess. I believed I was a terrible dog owner. I was certain I was an awful actress; I dreaded a film I was scheduled to shoot only a few weeks after the birth because I could barely focus enough to read the script.

Regarding her battle with depression, she added,

“And worst of all, I definitely felt I was a rotten mother—not a bad one, a rotten one. Because the truth was, every time I looked at my son, I wanted to disappear.”

She suffered for more than one and half years and then one of her friends persuade her to seek help from a professional which she listened at a time.

She then took homeopathic treatments and therapy which helped her to balance her emotions and slowly and gradually she get back to her real self, a loving mother, wife, and talented actress.

She Is Growing Up In Famous Family: Does It Affect Her?

Today, in the world of technology, it has become impossible for an artist to keep his/her private life, private especially when the paparazzi culture is increasing and so goes by with their family members. In the same way, as a daughter of famous parents, Seth Gabel’s daughter Beatrice’s life is not an exception.

Regarding this, Howard’s mom Bryce talked to People and said,

“It’s interesting because I got to experience such a similar childhood to the one my kids are experiencing,” she said at the time. “There wasn’t a ‘my parent is famous conversation.’ When you see somebody every single day, you don’t clock those changes.”

“Because I was raised in the environment of making movies & stuff that wasn’t a huge part of my thinking all the time. I get the sense that it’s the same with my kids,”

So, seeing this statement, we can say that Beatrice can easily handle all the hustle and bustle that comes around the famous family.

Beatrice Jean Howard Gabel Has Interest In Movies: Will She Started As An Actress?

Jean is a huge fan of her mother’s acted franchise show “Jurrasic world”. She even has a little toy version of the Indominous Rex. As she is growing up alongside actors in her family, it somewhere could have attracted her which is why she paid more interest in her mother’s filmy projects.

If it goes like this, there is a lot of possibility that Beatrice could pursue her career in the movie industry just like her mother did. Her mother had also followed in the footsteps of her father.

Right now, she is just a school student but who knows very soon she may appear in some project.

She is a 10-year-old girl and is yet to be introduced to social media. But even though she does not have her official account on social sites, she sometimes appears on her mother’s social media posts.

Just a few months back, in January 2022, her mom posted her on her Instagram @brycedhoward with a caption,

To watch Beatrice come into herself — a person with incredible kindness, sparkling wit, and genuine love for others and the world around her — is one of the greatest privileges in my life. Happy Birthday, Beatrice! 🎉 Welcome to double digits!! 1️⃣0️⃣

Though Beatrice is a private person, this caption of her mother shows that she is beautiful in and out. And having her, her parents are so proud.

As she has not started her career, so her net worth is yet to be estimated. But as a celebrity kid, she is having all the luxury and facilities for living. On the other side, her actress mother, Bryce Dallas Howard has an estimated wealth of $25 million whereas her father, Seth Gabel has a fortune of $2 million.