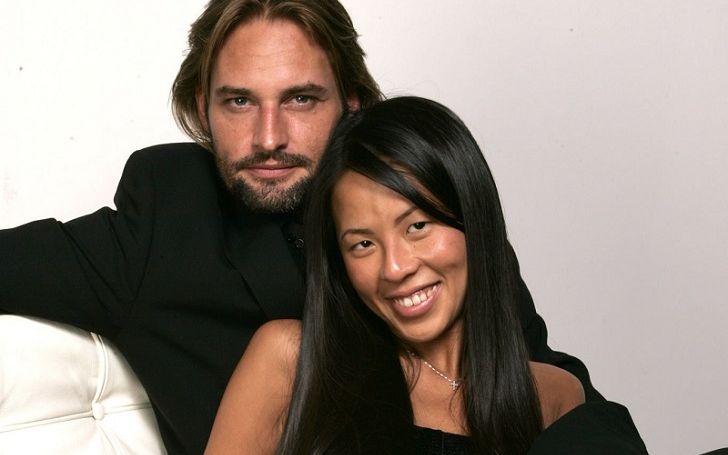 Yessica Kumala got the ultimate exposure as the wife of Hollywood heartthrob Josh Holloway, who is better known for his iconic role on the television show Lost. Before meeting her future-husband Holloway, Yessica was a nightclub worker in Los Angeles. But, after her marriage to Josh, Yessica has kept everything about her professional life behind closed doors. Sources say that Josh Holloway’s wife is now a full-time family member.

Besides, a year after their wedding, Yessica and Josh who are now proud parents of two children were robbed at gunpoint in their Hawaii home.

There are a number of unexplored facts about Josh Holloway’s wife. To know everything about her, take a closer look at the article down below!

How old is Josh Holloway’s Wife Yessica Kumala? Her Birth Place and Parents

As of 2021, Kumala’s age is 42. She was born in 1978, somewhere in Indonesia to Chinese parents. She spent a significant part of her early life in Indonesia with her family.

Besides, as far as her ethnicity is concerned, Yessica has dual nationality Indonesian and American. Talking about her ethnicity, the celebrity spouse is of Asian roots.

However, further information about her early life and education is still missing.

Professional Career: Yessica Once Worked at a Night Club

As a young girl, Yessica did make her move from Indonesia to the United States of America and started working at a nightclub in Los Angeles, California. She spent several years working at the club.

Nevertheless, other than that there is nothing about her professional endeavors.

The future husband and wife first came across while Yessica was working at a Los Angeles bar in 1999. As soon as their eyes locked, Josh was smitten with Yessica. In an interview with Harry Connick, Jr., the famed actor opened up that Kumala was the first who approached him and asked for his number. He said,

“She looked me up and down and said, ‘Give me your number before you leave.”

The two subsequently exchanged their cellphone numbers. After some telephone talks, the duo started going out on dates.

A few years after they began their lovey-dovey, Josh landed his breakout role of James “Sawyer” Ford in the hit TV series Lost that propelled him to celebrity status. After shooting the pilot of Lost in Hawaii, Holloway proposed to Yessica.

When Did They Get Married?

Yessica and Josh exchanged their vows back in October 2004, in a private wedding ceremony. It’s been over two decades that the loving duo is together and the love between them has gotten even stronger.

The Lost star explained their years of commitment to each other with Page Six as,

“You need someone that you don’t always have to be romantic with. My wife and I have been together for 18 years, so sometimes we’re like, ‘Let’s just be friends right now.”

Yessica Kumala Is the Mother of Two Children

Josh Holloway’s wife gave birth to their first child, a daughter named Java Kumala Holloway on 9th April 2009, in Oahu, Hawaii. The couple announced they were expecting their first child back in December 2008.

They welcomed their second child, a son Hunter Lee, in February 2014. A source close to the couple confirmed to Us Weekly that the duo was expecting their second child in November 2013. The Lost actor also disclosed their pregnancy news in an interview with Entertainment Tonight, when the interviewer asked him what it’s like to be a TV sex symbol. He said,

“That’s funny because I’m a family man. I’ve got a four-and-a-half-year-old daughter and another one on the way. Pretty excited about that.”

Holloway is a devoted family member whose family comes first and then other things. The actor loves to spend the majority of his time with his family. He once said that the family of four sleep in the same room,

“At home, we all sleep in the same room, so I wake up thinking about how beautiful my children are, lying there sleeping.”

When Kumala and her husband Holloway were still newly minted, the duo faced a terrific robbery in their Hawaii home. They claimed a gun-toting burglar took cash, credit cards, and a Mercedes-Benz. The luxury car was later found abandoned.

One of Josh’s best friends Maggie Grace, an actress told Hollywood that Holloway worked tirelessly to complete the dream property. She told the tabloid,

“They’re really important people to me and it’s really scary that they had to go through that. Even though they’re okay, they just finished their house and Josh has worked really hard his whole life to buy his first house and a car as a gift for his wife. And now to kind of have that sense of safety sort of shattered.”

More than two years after the duo were robbed, Ruben Royce, the man convicted of committing the crime was sentenced to between 13 and 30 years in prison for a three-week crime spree.

Her hubby is an American actor who is primarily known for his work in science fiction drama Lost, & Colony, where he appeared as James “Sawyer” Ford, & Will Bowman respectively.

He was born on July 20, 1969, in San Jose, California, U.S. However, soon after his birth, his parents moved Georgia, where he spent a major part of his life. Later, as he grew up, he moved to Los Angeles to pursue his career in modeling.

Beginning a career in 1999 in the series Angel, Yessica has appeared in numerous movies and TV series like Just Yell Fire, Paranoia, The Lyon’s Den, Yellowstone, & others.

Kumala has accumulated a fair amount of money from her various works. Her estimated net worth is $1 million as of 2022. In the meantime, her hubby Josh’s wealth is $22 million. He has racked such a considerable fortune from his work on dozens of films and TV.

Where Does Kumala Live?

The ex-bar worker now resides on the island of Oahu with her husband and two kids. The family of four moved there soon after Holloway sold his home in Honolulu for $1.2 million in 2018. Built in 1962, the single-story mansion has three bedrooms and two bathrooms.

According to Los Angles Times, the actor bought the property for $774,000.