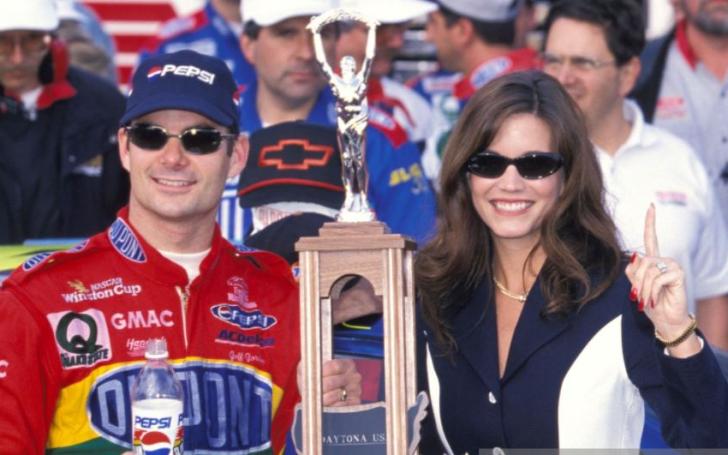 Brooke Sealey is the former wife of NASCAR legend, Jeff Gordon. The former pair was in a relationship for around a decade before calling it quits. Yet, they didn’t welcome any children.

After divorcing Jeff, Brooke received a hefty paycheck as the divorce settlement. Ever since their separation, people are curious to know what Brooke is doing nowadays. Like her husband, has she also tied the knot?

Moreover, many of us are unaware of her early life and professional life. Well, let’s find out everything about her and take a look at what she is up to nowadays.

Brooke Sealey was born and raised in North Carolina

She was born on November 29th, 1970, in North Carolina. Her parents raised her a devout Catholic. Her full name is Jennifer Brooke Sealey. Information on her siblings and parents isn’t available due to the fact that she is a secretive person.

Brooke belongs to the Caucasian ethnicity and has American nationality. She comes from English ancestry.

Talking about her education, Brooke studied at the Winston-Salem Parkland High School. After graduating high school, she went to the University of North Carolina at Charlotte and majored in early education.

Ever since she was a child, Brooke wanted to be a model. Thus, right around high school, she decided to give it a shot and entered the world of modeling.

Upon entering the fashion world, she started making headlines. Her career rose up pretty quickly and before you know it, she came on the radar for several leading ad agencies.

After making it big in the industry, Brooke worked as a model for numerous brands. However, some times later she quit modeling and joined college.

It was the early ’90s when the former flames came across each other. At the time, Brooke had just quit modeling and was studying at the University of North Carolina. While studying at the college, she decided to earn some extra income and decided to answer a call from an ad agency.

The ad agency gave her a job and she found herself working as Miss Winston at the Winston Cup Circuit. On the other side, in February 1993, at the Winston Cup circuit, Jeff won a qualification race and while in the victory lane at Daytona, he first came across Sealey.

Both of them were immediately smitten with each other and without wasting any time, Jeff asked her out. Nevertheless, the pair couldn’t make their relationship public for the first couple of months due to the fact that there was an unwritten rule that prohibited drivers from dating models.

It wasn’t until December of 1993 when the pair made their relationship official. Eventually, the couple started dating publically and became the talk of the town.

They married around two years after their first meeting

Brooke Sealey and Jeff dated for around two years before they decided to take the big step. Jeff asked her to be his bride and of course, she said yes. They exchanged vows in an intimate ceremony on November 26th, 1994.

After getting married, they became known as NASCAR’s first couple. And why wouldn’t they? After all, Jeff, at the time, was one of the most prolific race car drivers.

Initially, the lovebirds had gotten engaged right at their first year anniversary. Jeff being Jeff reserved a full-blown banquet hall at a French restaurant in Dayton Beach. He brought her to the resto and proposed right there and then.

During the initial phase of their marital life, the couple lived in their home in Lake Norman in North Carolina. Nevertheless, their stay at this house didn’t last long due to a fan intrusion. They later moved to Highland Beach, Florida.

Brooke divorced in 2003: She claimed he cheated on her

After years of staying together, their otherwise fairy tale marital blessing came to a standstill. It was Brooke who first filed for divorce. She filed her petition in March 2002, claiming, their marriage is, “irretrievably broken as a result of the husband’s marital misconduct.”

The divorce in itself wasn’t that big of a shocker but what really took us all by surprise was Brooke’s claim that Jeff had cheated on her. Although she didn’t mention any name, tabloids back then reported Gordon was having an affair with an actress and fitness model, Deanna Merryman.

On the other hand, Gordon never really said anything in the media regarding his wife’s claim. The very next day after she filed for divorce, he said, “I’m not going to comment on it.”

After divorce, Brooke gave birth to a child: Who is the father?

Many years after her public divorce from Jeff, Brooke once again came to the media. In 2010, she was involved in a custody dispute over her child with none other than the baby’s father himself. According to the docs, the man in the dispute was James Dixon II of Charlotte, NC.

Brooke gave birth to a baby boy on September 2nd, 2009. However, in a twist, she gave the child her former husband Jeff Gordon’s surname instead of his real father’s. This is why Dixon filed a petition wherein he asked the court if the child should have Jeff’s surname or not. In addition to the custody and the surname change, he also asked for $10,000 child support from the former Mrs. Gordon.

In May 2010, Brooke tied the knot with Attorney and politician, Mullins McLeod. Her husband Mullins is a former South Carolina gubernatorial candidate. News of their marriage didn’t hit the media until her custody dispute with the former partner, James Dixon came to the surface.

As of now, Brooke and Mullins live a contentful life. They live in Sullivan’s Island, South Carolina. For the last decade or so, she leads a relatively peaceful life.

Besides, Jeff also remarried. Since 2006, he is blissfully married to Belgian model, Ingrid Vandebosch. The couple is also a parent of two kids, Ella Sofia & Leo Benjamin Gordon.

How much is Brooke Sealey’s net worth?

After her divorce from Jeff, Brooke became a millionaire. In papers she received at least $15.3 million, however, Jeff himself claimed the divorce settlement was double that amount. Even if we don’t take Jeff’s word for it, we can safely say she got around $20 million.

Moreover, Brooke’s ex-boyfriend James claimed she has a mansion which is worth $1.2 million in addition to a few luxurious cars. Well, from all this we can say she is enjoying a lavish life.

She is not on social media