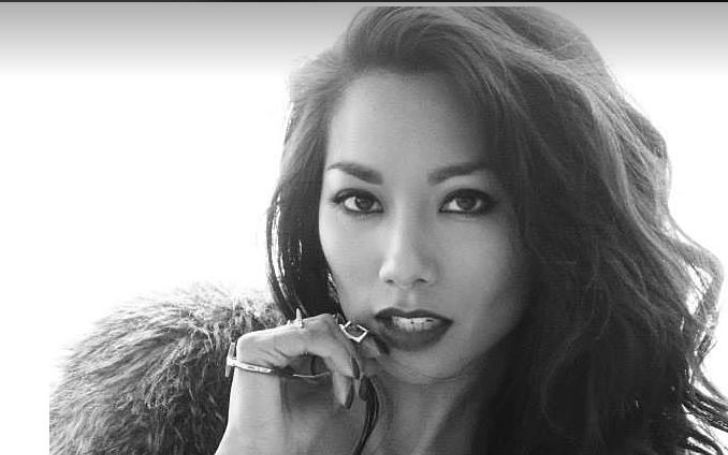 Donna Benedicto is a singer, model, and actress known mostly for Hallmark movies. Some of her films are A Wish For Christmas, Operation Christmas, Four Christmas And A Wedding, Forever Christmas, Christmas On My Mind, Farmer Seeking Love, and others. As a singer, she has been a big name in Vancouver’s cover band scene for the past few years.

Benedicto’s face is familiar to many as she also lights up stages across the city with her soulful vocals. Singing-wise, her work spans all musical genres. Donna Benedicto has been making Hallmark films since 2016, and while that might seem like a relatively short time, she has managed to be in more than dozens of Hallmark movies. Much to the people’s surprise, Benedicto has been in so many Hallmark movies. The Brunette celebrity says she just loves getting to highlight the supporting cast.

And the viewers absolutely adore her, and her fans believe she is well on her way to becoming a much-sought-after “star.” Her other notable appearances include television series like Supergirl, Almost Human, and The Main Event. Take a look at length with Donna to trace the adventurous journey that brought her to her current standing that looks promising as it could be.

What Is Donna Benedicto Nationality; Is She A Filipino?

While Benedicto, by nationality is a Canadian, she has admitted to being born in Vancouver and growing up in Richmond in a Filipino family. Her parents were first-generation Filipinos. She also often get roles as Filipinos on TVs.

The recurring star went to Hugh Boyd Secondary in Richmond. Although Benedicto celebrates her birthday in the month of October, the year she was born is still a mystery. By and large, she nonetheless is believed to be in her late 20s.

Benedicto admits she struggled to fit in at her school socially. Her elementary school was mostly white so for her, fitting in was very hard. Due to this, her schoolwork took a major backseat. She would do just enough to pass tests.

The Forever Christmas star once said she would never do homework. She also says people who went to Hugh Boyd with her don’t remember her at all.

This she states is partly because in grades 10, 11, and 12 she never attended school regularly. Donna would skip all the time. She would call in and pretend to be her mom (in an impeccable Filipina accent). She also admits to feeling always insecure when she was at school.

Benedicto Originally Started Out As A Singer

Donna’s Filipino parents originally wanted her to be a nurse, a dental assistant, or a hygienist. But once she did a show they were really encouraging.

For her, the singing began when she was really young; she sang her first song at 4, in church. Donna sang in the church until the age of about 11.

Benedicto says she developed an interest in music because of Beyoncé, Mariah Carey, and Whitney Houston. She once revealed growing up listening mostly to R&B and soul. Benedicto at the time was also managing a busy bar through which she was making a leaving.

In an interview talking about those times, the Christmas On My Mind actress said,

I didn’t really have any kind of goal or passion for anything. I had a boyfriend at the time tell me that I was a pretty decent singer, and he encouraged me to take some lessons.

She eventually took lessons for about a year. Benedicto had been working at this bar for about six years, and after a while, her boss found out about her singing lessons. He first made her sing at a staff party.

Benedicto says she was all right back then; she really wasn’t a very good singer but because she had been working at the bar for six years, her employers knew that if they gave her a show, everyone would come. Donna got a show every month. Over time, she got better and better and really liked the performing aspect of it.

Benedicto then auditioned to be in a cover band. Once she got in, she didn’t have any creative control, so the Hallmark actress didn’t get to pick any of the songs they sang.

While she would practice 8 hours a day, every day, starting a couple of months before the show, she didn’t write music or anything like that. For her singing was more of a hobby.

Why Did Donna Benedicto Move To The Acting?

While Donna was following her childhood love, her job as a singer in the band had to do a lot of songs that she didn’t really like and weren’t really to her taste. The now emerging TV star eventually took a break from singing and started taking acting classes after which she says she was hooked.

Talking about what she liked about her second career interest, Benedicto said,

It’s not the writing part that I’m passionate about. I love singing and all that, but for me, it’s the performance aspect of acting and singing that I really enjoy. So that’s how I got started. And like anything, you get better and better.

Donna believes, to her, it makes a lot of sense for actors to begin as musicians. She claims the latter helped with her current career a lot.

Donna started her acting career by landing a cameo role as Cindy in the 2013 documentary series Untold Stories Of The ER. She then starred in the 2014 short movie Irregardless after which she got another one-time role in the TV series Almost Human.

Her first time acting in a movie was for a 2016 TV film, The Real MVP: The Wanda Durant Story. The same year, Donna landed her first Hallmark movie job; her role of Megan in the 2016 film, A Wish For Christmas.

Since then Benedicto has been on over 40 projects films and TV shows combined. So far her notable tv show appearances are as Mandy in the CW’s Supernatural, as Doctor in UnReal, Kendra in A Million Little Things, and as Agent Reiff in Supergirl.

For all that Donna is expressive about her life on her social media handles, she is yet to share a glimpse of her love life. By the looks of her Instagram feeds, it appears the one-time iZombie actress is more or less single much less with a husband.

Benedicto although doesn’t hesitate to share her hangouts and girls’ night/day outs, she, conversely is nowhere near mentioning if she has a boyfriend or not.

While Benedicto has revealed it was her ex-partner who encouraged her to go for singing, she hasn’t disclosed who he was or if things still stand with him. Though the latter part seems less likely in that Donna herself has come a long way from her singing career.