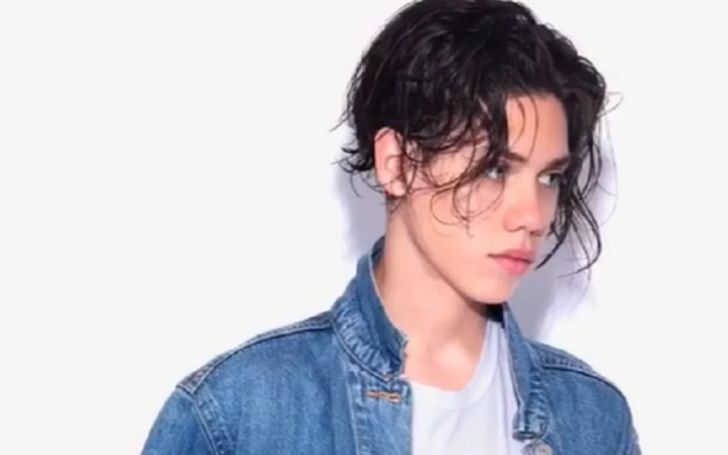 Ryan Adrian Muñiz is the younger son of one of the most selling tropical salsa artists of all time Marc Anthony and a former Miss Universe Dayanara Torres. His parents had a rocky marriage that ended after around three years of marital relationship in 2003. Tony then married actress and dancer Jennifer Lopez for seven years.

Besides, the young Ryan is a more low-key person but his proud mother Dayanara often shares photos and videos of himself on her social media handles. The doting mother also called her son multi-talented in her photo’s hashtags, mentioning himself as a soccer player, footballer, baseballer, drummer, guitarist, and more. Then, let’s find out if Ryan is really into these all.

Furthermore, we will talk about Ryan Adrian Muniz’s parents’ marriage, siblings, and more in the article!

What is Ryan Adrian Muñiz’s Age? His Early Life and Education

Ryan is aged 18 as of 2022. He was born on August 16, 2003, at North Shore University Hospital in Long Island, New York. Growing up in his hometown of Long Island, Ryan belongs to Puerto Rican ancestry as both of her parents are from the same background. He is an American as per his nationality.

For his education, Ryan completed his graduation in June 2017. His mother posted a short video of her son in the honor of his graduation, in which, Ryan wore a graduation gown and a cap. In the caption, Dayanara mentioned her son as a “committed student and hard worker,” with hashtags.

Ryan, 18, became an official adult on 16th August 2021. On this special occasion, Ryan’s mother uploaded a sweet video of her son, featuring his older brother Cristian also. The proud mother wrote the caption,

“I love you My Ryan !!! I feel so proud of you, of your beautiful heart, of how you see life without fear, of how nothing stops you … What an honor it has been to learn from you, see you grow, and become the young man you are today … The future is ALL yours … Can’t wait for the world to see what you will create!”

As for the birthday party, Ryan and his mother, Dayanara celebrated the day with a family meal at the Rumba Kitchen restaurant.

Who Are Ryan Adrian Muñiz Parents?

Ryan is the son of former power couple Marc Anthony and his ex-wife, Dayanara Torres. Both of his parents are quite successful in their own rights. Ryan Adrian Muñiz’s father Marc is a legendary artist who has won numerous prestigious accolades including three Grammy Awards, six Latin Grammy Awards, and more.

On the other hand, his mother Dayanara is an actress and a model.

How Long Had Ryan’s Mom and Dad Been Married?

His parents Anthony and Torres tied the knot on 9th May 2000. Their wedding ceremony was held in Las Vegas. A year after their marriage, the duo welcomed their first child, a son Cristian Marcus Muniz (Ryan’s older brother).

However, in early 2002, the two went their separate ways. But they rekindled their romance and also renewed their vows in an official ceremony in late 2002 at San Juan’s Cathedral in Puerto Rico.

Sources say, their marriage was full of difficulties. And they eventually filed for divorce in October 2003. It was finalized in mid-2004. At the time, the Judge ruled Anthony to pay Torres $3,500 a month in alimony and $6,500 a month in child support for each child.

A week after Marc’s divorce finalization, the artist went on to marry Jennifer Lopez.

How Many Siblings Does Ryan Have?

Ryan has four siblings including a biological one Cristian and three half-siblings. He has an older half-sister named Arianna Muñiz from his father’s previous relationship with his ex-girlfriend Debbie Rosado.

Ryan also has twin half-siblings named Emme Maribel Muñiz and Maximilian David Muñiz, born on February 22, 2008. They are from his father’s marriage with Jennifer Lopez.

Ryan Was Baptized At One

He was baptized two days before his 1st birthday. His baptism program was held at St. Agatha’s Church in Miami, on 14th August. His parents also appeared at the church.

What Does Ryan Adrian Muñiz Do? His Career Details

Ryan is yet to involve in anything professionally. But, the youngster is interested in a bunch of musical instruments. He often shows his musical talents via his mother’s social media handles.

In December 2019, his mother posted a video of her son playing the piano. Furthermore, back in August 2018, the former Miss Universe shared a photo, in which, Ryan is playing the drumset.

He also often sings a variety of songs.

His Other Interests: Is an Avid Sports Lover

Like his musical interest, Marc Anthony’s son Ryan is also versatile in sports. He plays baseball, soccer, and football. Furthermore, the 18-year-old is a surfer, swimmer, scuba driver, skateboarder, and motorbiker. If you don’t believe his talents, please have look at the following video posted by his mother and its hashtags,

Yes, Ryan does look alike his father Marc Anthony. His facial structure mainly his toothy smile is quite matching with his father. But, in the meantime, his blue eyes and full lips also have a passing resemblance to his mother.

Who is Ryan Adrian Muñiz Girlfriend?

Ryan, the 18-year-old young boy has remained secretive when it comes to his dating life. He has never come out with his relationship to date, nor any online tabloids have ever reported his love life.

So, as of 2022, it is hard to confirm whether Ryan is dating a girlfriend or not.

His Net Worth Details

Ryan Adrian Muñiz’s net worth is yet to estimate. But, being the son of such successful parents, the star kid undoubtedly lives a lavish lifestyle.

Is Ryan in Social Media?

We have yet to find out any social media profiles that Ryan is officially active in. But, the star kid often appears on his family members’ social media handles like Instagram and Facebook.