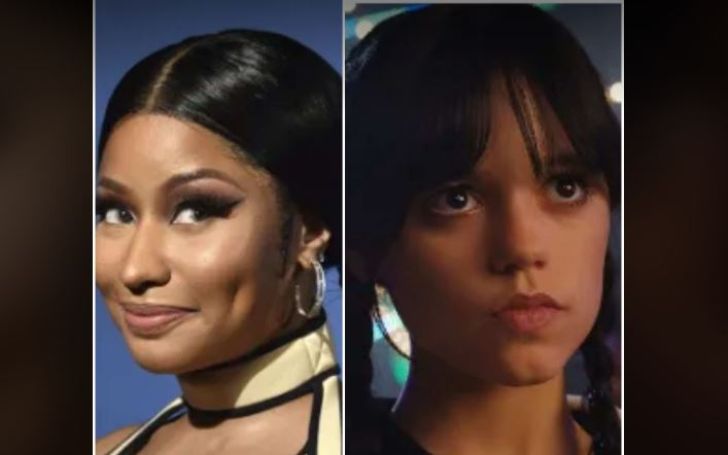 Jenna Ortega is a 20-year-old actress from Coachella Valley, California who is known for her appearances in films and shows like Jane The Virgin, You, and her recent worldwide hit, Wednesday. Ortega arguably has been the most popular ship in the latter series.

Even before starring in currently Netflix’s hottest show, Ortega was having quite a busy and successful schedule for a young Hollywoodian. She definitely is fast becoming the most wanted face. It however isn’t all of a sudden that Ortega has gained such popularity.

The American actress of Hispanic descent has been working half her life and has been gaining headlines since her early teenage. And now there are several such instances where she is leading the media attention. It’s particularly regarding her relationship with the Trinidadian American rapper and singer, Nicki Minaj. Surprisingly Ortega has been alleged to have some family connection to Minaj. But it seems too surreal to be true. Let’s explore the reality and truth in the headers below.

The short and perhaps even the long answer to this one is that Jenna and Nicki are not related at all.” There absolutely hasn’t been any statement or writings to prove this out-of-the-blue buzz, so far.

The falsehood, in the first place, is the courtesy of some random TikTok shorts with the title reading, Just Found Out Nicki and Jenna Are Related. The particular video has over 1.4 million views and over 300,000 likes and it’s no surprise Ortega and Nicki are the two of the most searched queries on google right now. The video however doesn’t even give the least amount of attestation that Ortega and Minaj are related.

While Ortega also has lip-synced to some of Minaj’s songs, it still doesn’t deter the fact that the actress has no blood connection to the Anaconda singer.

Minaj however isn’t the only celebrity, people think, might be related to Ortega. The speculations also include some other famous names like Olivia Rodrigo, Vanessa Hudgens, Gina Rodriguez, and Amancio Ortega.

Yet again, Jenna doesn’t have any relationship with any of the aforesaid names. While the Wednesday actress did receive recognition for her role as young Jane (for Gina Rodriguez) in The CW comedy-drama series Jane The Virgin, Jenna really isn’t related to Rodriguez.

Another name to have mistaken for Jenna’s family is the director/choreographer Kenny Ortega. This, for a while, was quite serious as the two individuals have the same last names which so often happens in Hollywood.

And of course, fans have suspected and asked for this type of shocker in the past with other celebrities as well. Furthermore, in this case, the two Ortegas have also worked alongside each other in at least one Disney project.

However, Jenna and Kenny are not related either. In fact, the Wednesday actress confirmed this herself when she did the Wired Autocomplete interview in Nov 2022. While answering the most searched questions regarding herself, Jenna, when it came to Kenny’s topic, said

Kenny and I actually talked about this. We met at an event a couple of years ago. He is an incredibly successful choreographer and director and is very big in the musical scene. I would love to be related to him.

The young actress however joked she would probably be his cousin or niece. Jenna also said she had met him more than once, she would have addressed him as an uncle.

A Bit About Jenna Ortega Career

Ortega started to visit auditions at age eight. She would eventually have her first-ever screen appearance in the 2012 episode of the CBS show, Rob, though, it was a cameo. She would make similar nature of came on another show, CSI: NY. On the big screen, some of her first roles are in films including Iron Man 3, Insidious, and Chapter 2.

Jenna’s first notable role would be the younger version of Jane on the romantic drama series, Jane The Virgin from 2014 to 2019. Following that her other a bit longer role was in Disney’s Stuck In The Middle. The show went on to become a success which would bring Jenna a handful of mainstream roles in films and series like Saving Flora, You, The Babysitter: Killer Queen, Yes Day, The Fallout, Scream, Studio 666, and X.

How Rich Is Ortega; What Is Her Net Worth So Far?

For many, it may be natural to ask or be a little curious about how much has Jenna amassed from her promising Hollywood career. After all, the actress has been working half her life. And turns out she’s raked in quite big for all the many roles the five-foot-one-inch tall actress has portrayed.

It’s arguably an impressive feat that Ortega has an estimated net worth of over $3 million at just 20 years old. What’s more, the actress still has a lot more to go. While her current salary from Wednesday is yet to be known, some suggest it very well could be in the vicinity of 70,0000 to 80,000 per episode.

Sarah Holcomb; Where is she? Her Age, Wiki, Siblings