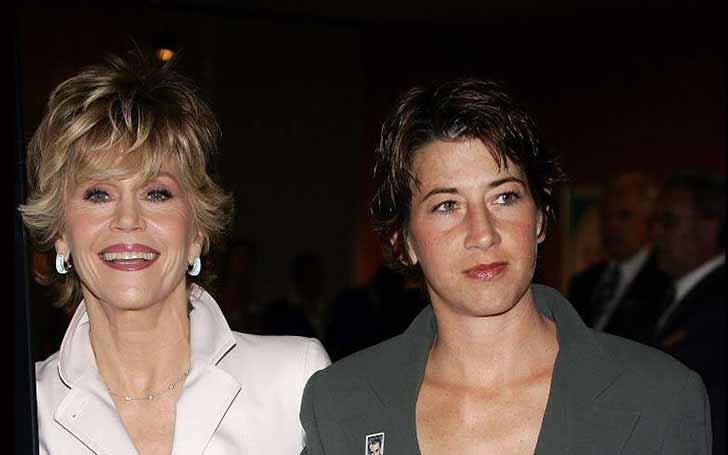 Vanessa Vadim is a short documentary film director. Besides, Vadim is very famous as the first-born child of renowned American actress Jane Fonda and her French husband, Roger Vadim. Born to an actor mother and director father, Vanessa got exposed to the show business from an early age. It ultimately led her to pursue a career in show business.

Besides her involvement in the show business, Vadim is also an ecological activist who has worked extensively to spread awareness about environmental issues. Vanessa has written various articles for several ecological websites. But, what about her personal life? Is She married? Does Vanessa Vadim have children?

We have all the answers regarding her personal and professional life here.

Vanessa was born Vanessa Plemiannikov to parents Jane Fonda and Roger Vadim. To talk about her birthday, Vadim was born on September 28, 1968, in Boulogne Billancourt, Hauts-de-Seine, France. Her parents named her after famous English actress and activist, Vanessa Redgrave.

Vadim is an American by nationality and belongs to mixed ethnicity. Her father, Roger was born to Russian father Igor Nikolaevich Plemiannikov and French mother, Marie-Antoinette. While Vadim’s mother, Jane was born to Canadian-born Frances Ford Seymour and American actor Henry Fonda.

Meanwhile, talking about her education, Vanessa completed her graduation from Brown University where she studied literature and society. Meanwhile, according to her Facebook profile, she studied M.A. English and creative writing at New York University. Besides, she also studied filmmaking at NYU Tisch.

Vanessa Belongs to the Family of Famous Personalities

Not only Vanessa’s parents are renowned actors, but her other family members and relatives have made great names of themselves. She is the ex-stepdaughter of Tom Hayden, Ted Turner, and Catherine Schneider.

Besides, Vadim is the cousin of Bridget Fonda and Justin Fonda while she is the niece of Parky Devogelaere, Helene Plemiannikov, and Peter Fonda. All of them at some point became parts of showbiz.

She Has Many Siblings from Her Parents’ Other Relationships

Vanessa Vadim doesn’t have any biological siblings. Her parents, Jane and Roger were married for around eight years from 1965 to 1973. The ex-pair started dating in 1963 and after two years of romance, they tied the knot on August 14, 1965, at the Dunes Hotel in Las Vegas.

After their official divorce in 1973, both Jane and Roger moved on quickly. Vanessa’s mom, Jane Fonda married politician, Tom Hayden just days after she obtained a divorce from Roger. From her mother’s second marriage, Vanessa has a half-brother, Troy O’Donovan Garity, born July 7, 1973. Vanessa also has a half-sister, Mary Luana Williams whom her mother and Tom unofficially adopted in 1982.

Vanessa’s mom, Jane married to third husband, Ted Turner in December 1991 whom she divorced in May 2001. Jane doesn’t have children with her third husband.

Roger was married five times until his death in 2000. He was first married to Brigitte Bardot from 1952 to 1957. His second marriage was to Annette Stroyberg while he married Jane Fonda as his third wife. Following his divorce from Jane, Roger married Catherine Schneider and Marie-Christine Barrault. As a matter of fact, Roger was still married to his fifth wife, Marie at the time of his death.

Vanessa Vadim Father’s Death – What was the Cause of His Death?

Vadim’s father, Roger Vadim died on February 11, 2000, in Paris, after a long battle with cancer. Roger died at the age of 72. As per the records, the renowned French actor died in a Paris hospital. He was buried at St. Tropez Cemetery. His ex-wives Fonda, Bardot, Schneider, and Stroyberg all attended his funeral.

Vanessa’s Relationship with Her Mother

Vanessa and her mother Jane Fonda haven’t been on the same track always. Fonda reportedly suffered from post-partum depression after giving birth to Vanessa. Furthermore, due to her busy work schedule, she couldn’t embrace her role as a mother. She used to stay away leaving her daughter in the hands of her husband Roger.

Talking about her post-partum depression, Jane Fonda once said,

“I just felt that I had failed – that nothing was turning out the way it was supposed to, not the birth, not the nursing, not my feelings for my child or (it seemed to me) hers for me.”

Furthermore, Fonda has expressed her remorse for not spending enough time with her daughter Vanessa.

Most recently, a documentary film around the life of Jane Fonda, Jane Fonda in Five Acts in 2018, however, Vanessa Vadim didn’t make her appearance on the documentary. Later, Fonda apologized for her daughter’s absence and said she and Vanessa had grown apart “due to some personal differences.”

Her Career in Showbiz

Growing up in a family of actors, it was obvious that Vanessa was influenced by her parents’ profession. She was especially influenced by her mother, Jane Fonda’s sparkling acting career to pursue a career in showbiz.

Vadim put her step into the entertainment industry as a crew member that gave her the opportunity to learn about filmmaking. Moreover, she also learned about cinematography by working on several productions.

Side-by-side, she also made a couple of screen appearances. Vanessa made her appearance in the historical 1993 documentary, The Last Party, in which she worked alongside the likes of Robert Downy Jr. Ann Palmer, and Bill Clinton among others. Four years later, she worked as a crew member of Blue is Beautiful, directed by James Schneider.

Coming to the year 2002, Vanessa Vadim directed her first short documentary named The Quilts of Gee’s Bend. Besides being the director, Vadim was also a cinematographer, editor, and producer. Vanessa hasn’t been active in showbiz ever since.

Vanessa Vadim as an Environmentalist

Ever since Vadim left her journey in showbiz in the early 2000s, she has been active as an environmentalist. She has been playing a vital role in bringing forward several critical environmental issues.

She has worked as an ecological activist and lately, Vanessa has also written columns for several websites, including The Daily Beast, Mother Nature Network to name a few.

Besides, Vadim is a co-founder and producer at MayDay Madia, is an owner of V2 Synergy, and works as an organic farmer at Earthseed.

Her Net Worth – How Much Is Vanessa Vadim Worth

As mentioned above, Vanessa has been part of film-making crews, has made her appearances on documentaries, and worked as a filmmaker. Besides, she has lately been active as an ecological columnist for some popular web-based magazines. With her involvement in a variety of sectors, we can say for sure that Vanessa has earned well. Unfortunately, her exact net worth is not available at present, but it is certainly in millions of dollars.

Vanessa currently lives in Atlanta where she has been for a long time now. She mentioned on her Facebook that she moved to Atlanta in 1999. According to the estimations made by some online sources, the house she owns in Atlanta, Georgia worth more than $500,000.

Meanwhile, when talking about her mother, Jane Fonda, she is a multi-millionaire with an estimated $200 million as of 2021.

Vanessa Vadim Married Life and Relationships – What Is Her Current Marital Status?

Well, Vadim hasn’t talked about her relationship status recently, however, as per her statement in 2017, she is a single mother who lives in Atlanta. The Daily Beast, for which she has been working as an ecological columnist for a long time mentioned Vadim as a single mother in one of its articles in 2017. However, she was married previously and has had a couple of other relationships.

Vanessa married her long-time partner Paul Van Winkle in 2010. The pair tied the knot on June 12, 2010, in Saint Tropez, France. Jane Fonda wrote a blog about the splendid wedding on June 13, a day after her daughter officially became the wife of Paul Van Winkle. The pair remained married for some years, however, they ultimately ended their marriage. Unfortunately, there is no info on when and why they divorced. Vanessa doesn’t have children with her ex-husband Paul.

Before Paul, Vadim was in a relationship with Matt Arnett in the early 2000s. Vadim and Matt gave birth to one child, daughter Viva Arnett on November 23, 2002. Vanessa hasn’t revealed much about her relationship with Matt in the media. Meanwhile, Vanessa Vadim also has a son, Malcolm McDuffy, however, details about Malcolm’s father have yet to be revealed.

Vanessa has not been in legal issues more often like her mother Jane Fonda. However, according to IMDb, Vadim was arrested back in October 1989, on charges of loitering for the purpose of purchasing drugs, obstructing governmental administration, and disorderly conduct. As per the statement from police, the man she was with had two glassine envelopes of heroin.