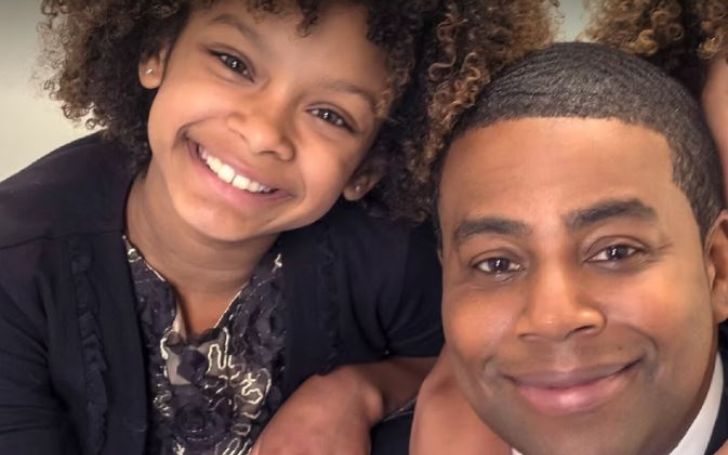 Georgia Marie Thompson is the eldest daughter of the longtime SNL cast and actor, Kenan Thompson. Kenan had Georgia with his ex-wife, Christina Evangeline around the early 2010s. Georgia also has a younger sister.

This celebrity kid’s father, Kenan has a long history in America’s one of the most popular shows SNL. His face has been on TV since the early 2000s and over the years, the comedian has become one of the most recognizable faces in Hollywood.

When Kenan isn’t acting, he is pretty busy and happy as the father of two girls, one of them being Georgia. Since becoming her father, Kenan has talked about his little girl and her sister on a number of occasions including how they are growing up to how they changed his life. Read all of them in the write-up below.

Georgia Marie Thompson Is A June Born; How Old Is She Now?

The first child of Kenan Thompson, Georgia Marie was born on Friday, June 20 in 2014. At the time, Georgia weighed in at 6 lbs.

Soon after the birth, Georgia’s mother, Christina took to her Instagram to show her then-newborn with a caption,

Kenan had first publicly announced that he and his then-wife, Evangeline were going to have their daughter, Georgia during his interview with Seth Meyers on Late Night with Seth Meyers.

I’m about to be daddy. Papa Kenan! I am terrified,

He at the time also confessed to not knowing what to do with babies. He also joked that he was going to be at the casino when Georgia is being born.

In another interview, Kenan said that having a baby was always in his and Evangeline’s mind and that the birth of Georgia and their becoming parents “all happened at kind of the same time.”

Marie has a younger sister, Gianna, who is four years younger than her. Speaking of the birth of Georgia’s younger sister and his second daughter, Gianna Michelle Thompson, Kenan said that her birth really kicked things into override for him. He however admitted to being thankful that Georgia and Gianna weren’t in diapers at the same time. Thompson says changing the diapers, for him, was the hardest thing to do on the planet.

Georgia Parents, Kenan And Christina Were Together For More Than A Decade

Georgia’s parents, Kenan and Christina Evangeline married each other in Nov 2011. Her mother, Evangeline, age 33, is a model and interior designer. Thompson and Evangeline met each other through a talent manager and they exchanged their vows in 2011 in the Arctic Room of the George Aquarium in Atlanta, Georgia, reports E!. The TV host/actor/rapper Nick Cannon Mc’d the ceremony.

Three years after the wedding, the couple would have their first child, a daughter, Georgia in June 2014. They welcomed their second daughter and Georgia’s sister, Gianna four years later in Aug 2018.

Georgia’s parents would see their relationship ending in June 2022 when Kenan filed for divorce from Evangeline. The couple initially separated in April 2022 but had been co-parenting their daughters Georgia and Gianna. The parents of the two remained very close to each other even after their separation. What’s more, there apparently isn’t much reason behind their separation.

According to TMZ, the divorce filings included the 50-50 request for the custody of Georgia and her sister, Gianna. Besides, Georgia’s mother is currently in a relationship with her dad’s co-star, Chris Redd.

Kenan Thompson says the birth of his daughter, Georgia changed him in a hilarious way. The Ohio-born comedian said this during his part in an Apple TV documentary, Dads. He also stated how his coolness expired soon after the birth of his first daughter Georgia.

One day you’re not a dad and then the next moment you are. You’re just a dad from that point on. And definitely, my coolness just got sucked right out of me. I didn’t know… I didn’t even feel it, but I just immediately started wearing black socks and shorts,

Kenan likewise mentioned him appearing corny at stores and over-asking questions about items that otherwise were super obvious to him.

Thompson in the interview for the documentary added that he is also in constant worry while learning how to calm down and testing his daughters’ resilience. According to the longest-tenured SNL cast, challenges also arose in figuring out the warning signs.

Kenan furthermore, while talking to People in 2020, said the biggest wake-up call for him was how quickly everything happened to him.

Thompson mentioned,  following the birth of his daughter, he went on to grow and mature in ways that he never imagined. He also said watching his daughter Georgia doing her homework was amazing to him.

Thompson additionally shared similar sentiments when he appeared on the NBC talk show Today in 2014. While talking to Kathie Lee Gifford and Hoda Kotb about fatherhood, the D2 actor said it really changed him and that it was unbelievable as well as the best thing in the world, “like witnessing a for real miracle.”

Georgia Once Appeared On America Got Talent

Georgia apparently is a huge fan of the reality show, America Got Talent. In fact, in 2020, when she was six, the celebrity daughter appeared on the show while her father, Kenan set in as its guest judge. Christina afterward took it to her Instagram to show her daughter’s time in AGT. At the time, Thompson had gotten the offer to fill in for the role of the show’s regular panelist, Simon Cowell who was then recovering from his electric bike accident. Kenan’s daughter, Georgia during her time in AGT offered her critiques for one of the acts in the competition. Apparently, both Georgia and her sister Gianna have interests in entertainment and acting.

Thompson once revealed his daughters, Georgia and Gianna are both funny in different ways. During an interview with HuffPost in May 2021, the father of two said,

“My big girl is one of the biggest hams I’ve ever seen. She is so funny. She’s 6 years old. It’s going hand in hand, her being funny and her also being highly energized, just all over the place and just being a kid.”

Kenan likewise added how his baby girl, Gianna also had a real devious sense of humor. He said those presumably were more from their mother, Christina’s side.

Thompson added his daughters had been simply hilarious and that they say the darnedest things and it was just because they didn’t really know what they were saying.

Georgia was the one who, Kenan said, inherited his sense of humor. In fact, the Smurfs 2 actor said the older she grew, the funnier she became.

How Rich Is Georgia Marie Thompson Father, Kenan Thompson; What Is His Net Worth?

Georgia’s father, Kenan is quite a rich personality who has an estimated net worth of over $13 million. Considering his title as the longest-tenured cast member of SNL, that shouldn’t come as a surprise. In fact, he is the richest cast among all the other faces of SNL even ahead of Kate McKinnon, Pete Davidson, Cecily Strong, and others. Celebrity Net Worth claims Thompson makes an average of $25,000 per episode which in turn brings him around $2-3 million a year. He furthermore is expected to make such an amount and possibly more for quite a number of years as he has a longer contract on the show.