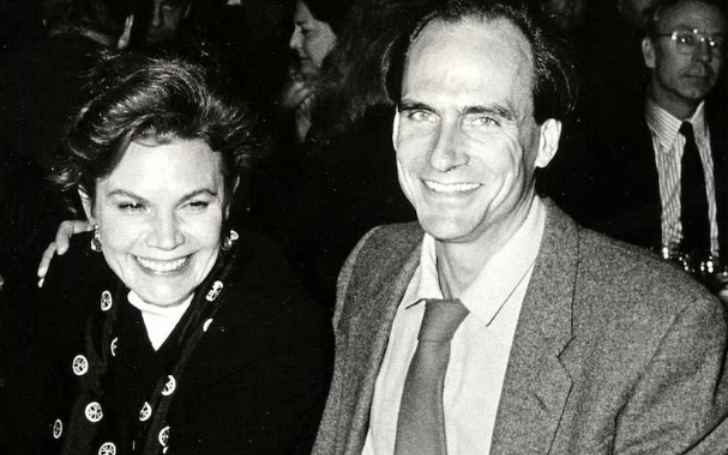 Kathryn Walker is an American theatre, television, and film actress known for her roles in movies like D.A.R.Y.L, Beacon Hill, Slap Shot, and Neighbors. She is also the Award-winning actress who won an Emmy award for her outstanding performances as “First Lady” Abigal Smith Adams in PBS’ 13-part epic miniseries The Adam Chronicles.

Besides her acting career, Kathryn is also known for being the ex-wife of American singer-songwriter and guitarist James Taylor. Kathryn and her now ex-husband James were separated after ten years of their marriage in 1996. Soon after their divorce, her husband was in a relationship with his now-wife Caroline. Then, what about Kathryn? Did the actress marry again?

Let’s get to know everything about an American actress and James Taylor’s ex-wife Kathryn Walker. Here we go!

How Old Is Kathryn Walker? Her Early Life And Education

As of 2022, Kathryn is 79 years of age. She was born on January 9, 1943, in Philadelphia, Pennsylvania, US under the birth sign Capricorn. She spent most of her early days in her hometown and grew up alongside her sister Sally Walker and her parents until her move to New York to study art.

Besides, the former celebrity spouse is American as per her nationality and belongs to the Caucasian ethnicity.

Career: Kathryn Walker Began As A Professional In Theatre

After completing the course at the London Academy of Music and Dramatic Arts, Kathryn Walker returned to her home country, the United States. And Kathryn started working at Princeton’s McCarter Theatre and became a part of several plays among which her character in the most unusual Play at the time “The Night of the Tribades,” was popular.

The play “The Night of the Tribades,” which was about lesbians was written by the young Swedish writer Per Olov Enquist. And in this specific play, Kathryn portrayed the role of the wife’s lover. She later worked at the theatre company in Boston.

During the time of her involvement in theatre, the actress acted in several roles in plays from Willian Shakespeare to Neil Simon. After working in a theatre company for some time, she then settled in New York City and continued her acting career in TV and movies.

Kathryn Walker Is Also A Movie and TV Actress

After she settled in New York City, Kathryn Walker began on the off-Broadway New York Stage in 1971 by performing in Slag. She then appeared on Television in 1972 as Emily Rogers Hunter in the series Search for Tomorrow. The same year, Walker did another two TV projects named Look Homeward, Angel and The House Without a Christmas Tree.

Subsequently, she featured in several TV series and TV films like All My Children, Too Far to Go, The Adams Chronicles, Beacon Hill, Private Sessions, and many more. Not only on TV but side by side, she was also doing movies on the big screen.

Her debut movie Blade came in 1973 in which she played the character Maggie. Kathryn’s other big screen projects include Slap Shot, Rich Kids, Neighbors, D.A.R.Y.L, Emma and Elvis, and Mandy’s Grandmother.

Her Broadway Projects Were Equally Popular

As mentioned earlier, after the theatre, she began professionally as a Broadway artist. In 1971, Kathryn performed for the first time in Slag. After that, she appeared in other projects like The Good Doctor, Mourning Pictures, Kid Champion, Private Lives, and Wild Honey.

Kathryn Was A Narrator As Well

Apart from her acting career, she also evolved as a novelist in the year 2008. She published her novel titled A Stopover in Venice, a fictionalized account of her marriage to James Taylor.

Kathryn Walker Was Married To James Taylor For 10 Years: Their Marriage In Details

As said earlier, Kathryn is the ex-wife of American singer-songwriter and guitarist James Taylor (aka James Vernon Taylor). The couple tied the knot on 14 Dec 1985 at the Cathedral of St. John the Divine in New York.

During the time when Kathryn got married to her husband James, he was addicted to heroin and his addiction was the reason that James’ earlier marriage with Caryl Simon was broken. And Kathryn entered the life of six-times Grammy Award winner James as his second wife. After knowing about his addiction, Walker gave her best to take her husband out of heroin addiction.

But as time passed, their relationship didn’t remain as before and they decided to split up in 1995. The couple legally got separated in 1996, ten years after their marriage. Following their divorce, her ex-husband Taylor went into a relationship with the head of public relations for the Boston Symphony Orchestra named Caroline Smedvig and now the two are married to each other.

Before her marriage to a singer, Kathryn was in a relationship with an American comedy writer and co-founder of the magazine National Lampoon Douglas Kenney.

Does Kathryn Walker Have Children?

Despite being in marital life for 10 years, Kathryn didn’t give birth to any child, neither from her marriage with James nor from any romantic affair.

But, on the other hand, her ex-husband Taylor has four children. From his first marriage, he became the father of his children named Sarah Maria Taylor and Ben Taylor. Further, he welcomed twins Rufus and Henry Taylor from his marriage with Caroline Smedvig.

Besides being an incredible artist, Kathryn was also an advocate of animal rights. In the period of 90s, she was hugely involved with different organizations that work for animals. Walker even founded a charitable organization named The Dobbin Society, a retirement fund for Carriage horses in New York City.

Furthermore, she was also a member of the Board of Cleveland Amory’s Fund for Animals. With active involvement with these charitable organizations, a theatre actress fought for animal rights and worked for them.

Where Is Kathryn Walker Now?

Since the release of her novel in 2008, there is no information about the Beacon Hill actress in any media outlets. At the time of the beginning of her career, Walker was living in New York City but lately, there aren’t any details about where does the actress reside.