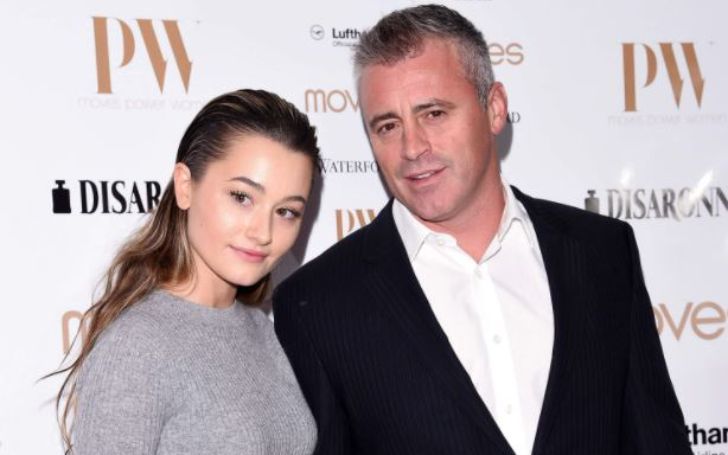 Marina Pearl LeBlanc is the only daughter of actor, Matt LeBlanc and his ex-wife, Melissa McKnight. Her father is famous for his work in the series, Friends which won him several accolades as well.

Besides, Matt has been quite strict when it comes to his daughter’s privacy. Although he has talked about his daughter here and there a couple of times, not a whole lot is known about her.

That being said, today we’re going to try and unearth a couple of interesting facts about the star kid. Moreover, we will also try to discover what she is doing nowadays. Has she become an actor like her dad?

She was born on February 8th, 2004, in Los Angeles, California. The only child between actor Matt LeBlanc and his former wife, Melissa McKnight, she belongs to Acadian and Italian ancestry.

Her paternal grandparents are Patricia and Paul LeBlanc. Her father Matt was born and raised in Newton, Massachusetts. Meanwhile, Marina spent her childhood on her dad’s ranch in Encino, California. She also finished up her formal education from the same place.

Well, her mother Melissa is an American actress known for her work in movies and TV shows like Triangles and Tribulations (2001), VH1: All Access (2001) and many other. However, she gained fame after her marriage with Matt LeBlanc.

Her mom and dad started dating sometime in the ’90s. As to how they met for the first time, there’s not much information about it.

After dating for a while, the pair got engaged in the year 1998. They remained engaged for a couple of years before deciding to marry. They exchanged vows on May 3rd, 2003, in an intimate ceremony in the Hawaiian island of Kauai.

At the ceremony, Matt’s Friends’ co-stars Jennifer Aniston, Lisa Kudrow, and Courtney Cox were in attendance. The other two members, David Schwimmer and Matthew Perry couldn’t make it to the wedding due to their tight schedule.

Although this was the first marriage for Matt, his bride Melissa was already married two times from which she even shared two children.

Unfortunately, their relationship came crumbling down, a couple of years after their marriage. It was in March of 2006 when Marina’s mom and dad filed for divorce at the Los Angeles Superior Court. Although the reason behind their divorce wasn’t made clear, reports stated it was due to Matt’s groping incident at a stripper club in British Columbia. The actor had publicly apologized to his wife but seems there was no other alternative for the pair.

Marina suffered from health complication at the time of her birth

Before she even turned one year old, Marina was diagnosed with cortical dysplasia. Because of this disease, she used to have seizures as a baby, which is quite terrible to bear witness.

Well, in case you don’t know, Cortical dysplasia is a condition that leads to the underdevelopment of the brain. The disease interferes in the formation of the top layer of the brain.

Although the disease was thankfully cured soon, her father Matt became extremely concerned for his daughter’s health. This is why, around the time she was diagnosed with the health issue, Matt voluntarily kept his profession in the backpedal and cared for his daughter.

In an interview, Matt recalled, “For years and years, I barely left the house. I was burnt out. I wanted to not have a schedule, not be somewhere. It was a very dark time. I almost had a nervous breakdown.”

How many siblings does Marina Pearl LeBlanc have?

Her older brother Tyler is the son between Melissa and Anthony Esposito. Likewise, the former pair also shares Jacqueline between them.

As for what both of Marina’s half-siblings are doing, well, both of them are well-settled. While the oldest one of the brood Tyler is a sound engineer, the middle one, Jacqueline is a Fashion Insitute of Technology graduate where she studied design. However, just like their youngest sibling Marina, the older ones aren’t in the public eye.

Besides, Matt was quite close to both of his step-kids. After he married Melissa, he took them in and helped raise them in his ranch in Encino, California. Back in 2005, while mentioning how great he was with his step kids, a source close to the pair said, “He’s amazing with the kids. He’s like a big kid himself, so they have a great time together.”

Well, we are yet to find anything on her current whereabouts let alone about her dating life. One can assume she might be dating someone but we cannot say anything for sure.

Her father Matt is also private when it comes to his daughter. That being said, the father-daughter duo shares a close-knit relationship. Matt has mentioned a number of times his daughter is a ‘daddy’s girl.’

In an interview with PEOPLE, he said, “She can wrap me around her little finger. I’m powerless.”

Furthermore, the father-daughter duo spends a lot of time together and Matt cherishes all the little time they spend together. For him, spending time with her is one of the best things ever.