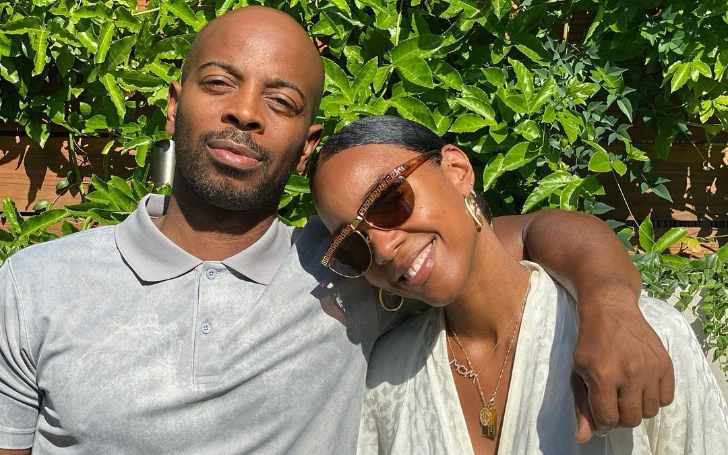 Tim Weatherspoon is the entertainment manager famously known as the husband of the American singer, actress, and television personality Kelly Rowland. His wife is best known as one of the members of the best-selling girl group Destiny’s Child. Further, Kelly is also a five times Grammy Award-winning solo artist.

Moving on to their personal life, Tim and his wife Kelly has already been together as a married couple for nearly a decade. The couple shares two adorable children too. Besides his family life with America’s renowned solo artist, exactly where does Tim belongs? Who are his parents?

Go through the article to know everything about Kelly Rowland’s husband Tim Spoon including his age, father, career, worth, and many more. Here, we go.

How Old Is Kelly Rolland’s Husband Tim Weatherspoon? His Parents And Siblings

As of 2023, Kelly’s husband Tim Weatherspoon is 48 years of age. He was born to his parents Tommy and Jackie on January 8, 1974, in the United States under the star sign Capricorn. His birth name is Timothy Jon Weatherspoon.

Likewise, he was raised by his parents in his hometown alongside his brother named J Rock, and a sister named Dawn Weatherspoon Chisholm. Both of his siblings are younger than him.

Talking about his nationality, Tim who stands height of 6 feet and 4 inches is American and belongs to the Afro-American ethnicity.

Tim Considers His Father As His Superhero

Coming up to the year 2023, his father is no longer in the living world. However, Tim was incredibly close to his late father and considers his daddy his superhero. On June 19, 2017, he posted his picture with his dad and wrote,

Father = SUPERHERO. Happy fathers Day to all the Superheroes

Actually, his dad was a superhero not only for his kids but for the country as well.

He served in the navy when he was alive. Back in 2017, Tim’s sister too posted her dad’s photo in navy uniform on her Instagram and wrote, “#tbt my daddy 😘 I miss him”.

Career: What Does Tim Weatherspoon Do?

The celebrity husband, Tim is a talent manager. As part of his job, he has worked for his wife Kelly Rowland as her music manager. Further, his Facebook account suggests that Weatherspoon is a consultant too.

In addition, as per his LinkedIn account, he is also the owner of the Danish-owned IT solutions company, i2i.

The talent manager Tim and his singer wife Kelly got married on May 9, 2014, in Costa Rica. The couple had a destination wedding with total attendees of around 30 including her pal Beyonce and Kelly’s sister Solange.

Regarding their marriage, one of the close family sources stated,

“It was a quick, simple ceremony—only around 30 people

The now-married couple first met through their work to each other. In 2009, Tim was appointed by Kelly as her music manager. But as time passes, they fell in love with each other, and eventually, after 5 years, the duo shared the vow.

Tim Proposed To His Wife Kelly On Skype; The Duo’s Engagement Was Confirmed In The Queen Latifah’s Show

Before getting married, Tim and his beau dated for a while, and their relationship was kept private. But in December 2013, Tim’s now-wife Kelly confirmed her engagement with her manager and boyfriend Weatherspoon in The Queen Latifah Show hosted by Queen Latifah. The singer told,

While responding to the question of how she got a proposal, Rowland told,

“It happened, um, on Skype,

She further explained that it happened when she was in Bulgaria for a show and the couple was having a chat through Skype and suddenly Weatherspoon proposed to her for marriage, which she accepted, and the rest is history

Weatherspoon And Kelly Has A Great Bonding; They Are A Best-Friend Couple

Coming up in 2023, Tim and his singer wife Kelly is married for 8 years. In all these years, their relationship is getting better day by day. The couple shares a great bonding which can also be noticed on their respective social media account. On May 2020, Tim’s spouse Kelly on their marriage anniversary wrote on her Instagram,

Similarly, Tim also shares his moments with his beloved better half on his Social Media account. Further, he has been seen multiple times supporting and cheering her up on her success just like best friends do for each other.

Tim Weatherspoon Is A Father Of Two Sons

From his marriage, Tim became the father of two sons. His first son’s name is Titan Jewell Weatherspoon and he was born on November 4, 2014. At the time of his birth, he weighed  7.5 lbs. As of 2023, Tim’s first-born child is already 8 years of age and active on Instagram with 14k followers.

Further, the executive producer is also a dad to his little one named Noah Jon Weatherspoon. Noah was born on January 21, 2021, and on his arrival, Tim’s spouse Kelly shared the good news on her Instagram with the caption,

The celebrity husband is hugely active on Instagram with 84.3k followers. On his Instagram, he keeps sharing his moments together with his family and friends. In addition, he also shares motivating quotes and big personalities across the country.

How Much Is Tim Worth?

For a long time, he has been actively working in the American Entertainment Industry. So, it’s obvious that he has earned a good amount from his profession. As a result, he has an estimated fortune of $12 million which is his combined net worth with his wife.