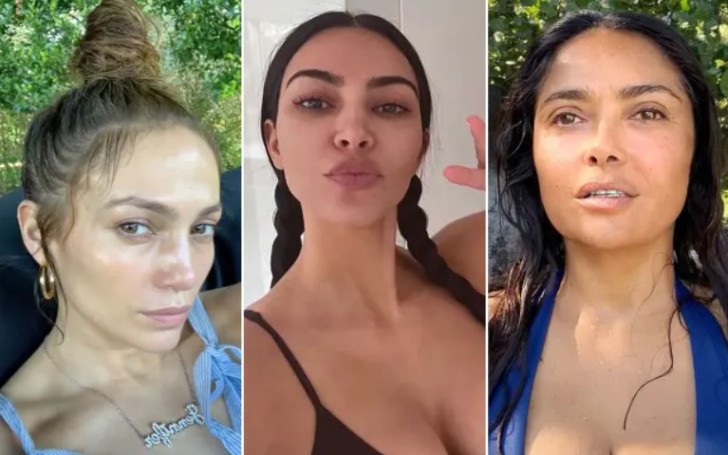 Several celebrities look gorgeous even without makeup. They can walk the red carpet with a bare face and still look stunning. It goes to show why cosmetics aren’t the only option you can rely on to look good and you can be comfortable in your skin.

Many people have a common stereotype that makeup and cosmetic products are the only tools to help make a person attractive. The industry whether it be modeling, acting or music, heavily supports and promotes the use of beauty products. So, to counter the stereotype here is a list of the top ten celebrities who look beautiful without makeup.

So, today in this article we will be looking at a list of ten celebrities who look beautiful without makeup. Hence, let’s dive right into the matter at hand and get to know the personalities who look stunning without any cosmetic products.

Ariel is number ten on this list of ten celebrities who look beautiful without makeup. She is one of the core examples that makeup isn’t everything and that you need to have confidence in yourself to look beautiful.

She is an actress best known for her acting as Alex Dunphy in the comedy series Modern Family. The actress has won a lot of awards including the Screen Actors Guild Awards.

Selena is one of those who looks comfortable in her skin. She doesn’t shy away from a bare face and is seen on multiple occasions without any makeup. Gomez has appeared in numerous talk shows and interviews without any makeup on but still looks gorgeous.

She is considered to have a baby face and looks pretty young because of her complexion and natural looks. Similarly, in an interview with Vogue when talking about her beauty brand she said, “I also care so much about mental health and I believe it’s a part of your self-esteem, it’s a part of the way you see yourself and you shouldn’t have to have makeup for you to see yourself that way.”

The number eight position goes to Lucy Hale. She is a very beautiful individual. At this age and time, people are highly dependent on artificial products to increase their beauty. However, Hale doesn’t need the support of such products to look good. She looks pretty as she is.

Being an actress is not easy, and always looking good in photos is even harder. However, Lucy can look good in any kind of situation as she is a natural beauty.

The famous singer needs no formal introduction. She is on this list because her beauty speaks for itself. Her complexion is pretty nice which helps her to carry out a no-makeup look and still look great.

Cabello is an American singer-songwriter who loves to appear in front of the media with little to no makeup. She also frequently posts pictures of her fresh look and her fans seem to love it.

The number six on this list is not other than Kylie Jenner. She is one of those individuals who can look great at all times of the day. The famous model has shared a lot of no-makeup photos on her Instagram account without any extra touchups or cosmetics and to tell you the truth it looks great.

The talented model is very pretty and is very conscious when it comes to skincare. Jenner has even shared her skincare routine while talking with the New York Times.

She is an American singer, songwriter, and actress who is popular for her music albums like The Fame Monster and A Star is Born. Apart from her popularity in the music industry, she has greatly inspired youth. The famous singer has appeared in numerous TV shows, interviews, and concerts revealing her true self.

Gaga often appears in different places without any makeup. She carries confidence while walking bare face. She looks flawless even without artificial products which her fans and followers have appreciated. We can definitely say that Gaga is one of those industry artists who naturally looks gorgeous.

Angelina Jolie is one of the most influential personalities on this list and one of the most gorgeous ones at that. The actress with her blue eyes and white complexion is very attractive. She is also comfortable in her skin and is often seen without hints of cosmetics.

Her professional career needs no introduction. She has gathered a lot of attention and fans throughout her long acting career. People are left flabbergasted by how the mother of six, still looks astonishing to date.

Many people have seen her with a ton of makeup but Megan Fox is one of those celebrities who doesn’t need any glam-up to look beautiful. She is a natural beauty who can look stunning in any situation, whether a full makeup look or a bare face.

The actress and model is a celebrity who has appeared in many movies throughout her career and is best known for starring in the Transformers series and Jennifer’s Body. Similarly, throughout her career, she has gathered a lot of attention mainly because of her looks and how beautiful she is. Many people look up to her as their role model.

She is one of few celebrities who can pull up a no-makeup look and still come out on top as one of the most beautiful people. To be attractive as she is you definitely need good genes. However, her skincare routine has also played a greater role to make her as pretty as she is.

She is an American singer and actress who has written many songs over the year that have reached the number one position including songs like Crazy in Love, and Baby Boy. Similarly, she also a public image and has a huge following.

Being a public image means that you are surrounded by media and fans wherever you go; the same goes for Beyonce. The multi-talented singer has appeared in a lot of award shows and interviews where fans can witness her without any sort of cosmetics. She looks stunning and more importantly comfortable in her skin.

She doesn’t need any introduction. Alicia is number one in this list of top celebrities who look beautiful without makeup because she prefers to keep it simple. You must have seen her in various awards and reality shows without any cosmetic products.

Similarly, to tell you the truth, she has such natural beauty that makeup only comes as a distraction. While other celebrities are scared of walking in front of the media and people without makeup, Keys, on the other hand, isn’t afraid of walking bare face. She has adopted the #nomakeup movement and is a great example of the saying, less is more.