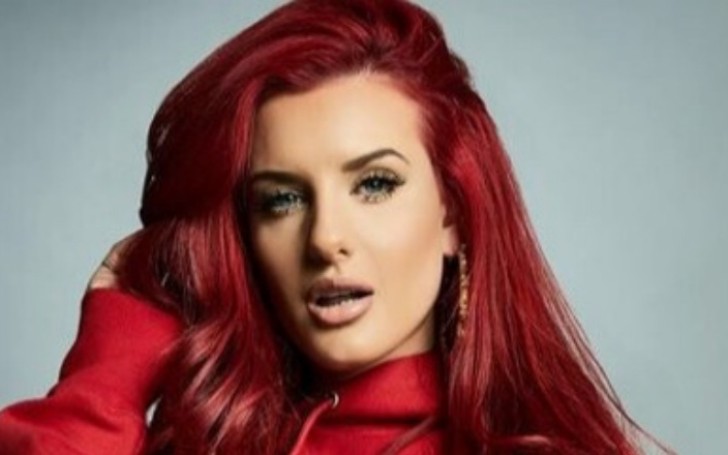 Justina Valentine is a popular American singer, rapper, and model. She is widely popular for her single Candy Land, All The Way, and others. Well, besides her professional accomplishments, questions on Justina Valentine’s boyfriend and relationships have also been a subject matter in the media.

Moreover, Justina has also been rumored to be dating fitness model Sommer Ray, which even raised questions on her sexuality? Here, let’s discuss her relationships, boyfriend, and let’s also know if she is married?

Who Is Justina Valentine Boyfriend?

Apparently, Justina Valentine does not have a boyfriend at present. This may sound unlikely considering the fame and exposure she has but the Candy Land singer is single currently.

In fact, Valentine has put herself away from a dating game for quite a while now. Her social media feeds come clean when her relationships are concerned.

Also, her posts on Instagram and YouTube are also pretty suggestive that she is busy with her work and not indulged in a love affair.

Justina Was in Relationship With Sommer Ray, Is She Bisexual?

No doubt, Justina is not dating anyone in 2020, but she allegedly dated the American fitness model Sommer Ray in the past.

The rumors of their relationship began after Justina made out with Sommer on MTV show Wild ‘N Out in November 2017.

The incident even gave rise to speculations that Justina is bisexual. However, Justina never confirmed her relationship with Sommer. Also, she has not addressed if she is bisexual.

Is Justina Valentine Married or Planning to Get Married?

Justina is not married at present, nor she ever got married in the past. But talking about her wedding plans, she seems to have none.

The 33 years old model Valentine has no plans to tie the knot any time soon as she has never spoken on the matter.

However, we wish to see her wed.

Who Is Justina Valentine?

As we have mentioned above, Justina is an American singer, rapper, and model. She is known for her singles like Candy Land, All The Way, Unbelievable, and many others.

Her first mixtape Route 80 was released in 2012, and two singles from the album, Bubble Gum and Hip-hop Joan Jett went on to become an instant hit.

Besides, Justina was also cast in the 8th season of MTV’s Wild ‘N Out in 2016. Her other TV works are Jersey Shore Reunion, How Far Is Tattoo Far?, Justina Makes Over Your Man, LipLocked, and many others.

Rapper and model Justina was born on February 14, 1987, in Passaic County, New Jersey, the United States. Talking about her age, she is 33 years old in 2020.

Talking about her parents, her father is a musician whereas her mother is a housewife.

She is Active on Social Media

Likewise, she has over 624k subscribers on her self titled YouTube channel.