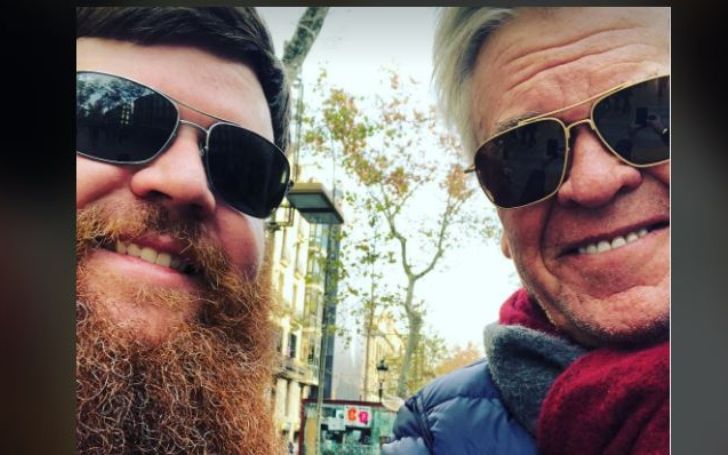 As for Marshall, he is now more busy with his own gigs; though in the past, he worked frequently with his comedian father, Ron White. While working with the Drunk In Public writer, Marshall claims he has seen many facets of the world of comedy. He also sold merchandise for his dad. Know more about his current endeavors, whether he is married, has a girlfriend, and others.

Marshall White Parents Details; Who Is His Mother?

One thing that Marshall White is yet to reveal about himself is his birthday. He though is speculated to have been born in the early ’90s.

His father, Ron White, born, December 18, 1956, in Fritch, Texas is the son of Charles Don White and Barbara Joan Craig. The Senior White also served in the United States Navy. Marshall’s dad joined the service at age 17 and served on the auxiliary rescue and salvage ship USS Conserver near the end of the Vietnam War.

The Tater Salad comedian from a young age aspired to become a comedian. Ron lived in Mexico for a brief period and bought a pottery factory there before returning to the U.S. to pursue comedy. As for Marshall’s mother, Lori Brice is now Mrs. Exline and is mostly into Facebook fundraising programs.

Over the last decade, Lori, the now wife of Terry Exline, nonetheless, has turned into some sort of a has-been name and has mostly remained off the media’s attention.

Lori was Ron’s first spouse; after her, the comedian married twice; first to an interior designer, Barbara Dobbs, and then to a Mexican singer, Margo Rey.

Marshall White Education; Has Quite An Impressive Academic Credentials

Lori and Ron’s only son, Marshall went to Weddington High School where he was also in the Marching Band.

During high school, he also took classes in music theory, environmental science, and US History. He additionally took 3 AP courses in his Junior and Senior Years.

The now 30-something-year-old Marshall says he is proficient with multiple instruments and has also taught younger students how to play their instruments amidst his high school phase. In fact, during school, he had won the title Music Student of the Year.

As an adult, he, thus is adept in music composition and arranging and knows his way around numerous brass and woodwind instruments. After high school, he did a bachelor of science in recording arts from Full Sail University, 2009-2011.

He additionally has the ability to use industry-standard Pro Tools, Logic Pro, and Garageband with a concentration on acoustic instruments. Marshall also did post-production training with an emphasis on both Film and Video Games. He, in addition, studied Analog/Digital and Digital/Analog conversion under Brian Smithers, a forest ecologist.

He Has An Equally Impressive Work Resume

White’s son, Marshall’s work resume began in the mid-2000s. He used to work as a Tour Manager for Plastered Touring during the summer of 2004. Then from 2006 to 2007, he worked as a cashier for Regal Cinemas and also as a floor staff for general cinema and Paly N Trade DRT Games.

In the late 2000s, Marshall worked as a production assistant for Paramount Studios; also a part of his Doctor’s program. During this time, he also studied the SMPTE time code and was Michelle Wendt’s assistant.

When reported in Feb 2021, Marshall was a member of the Advisory Committee for The Marshall White Community Center, a community recreation center from the people of Ogden City, Utah. The organization is a low-cost option for numerous programs, classes, activities, events, and resources to the community.

It apparently is also the only public building in Utah named after a Black man, according to the NAACP. Its name is after fallen officer Marshall N. (Doc) White who was the 1st African American officer to lost his life in the line of duty in Utah. As of recent Marshall presumably co-owns a smoke shop business in Austin, Texas.

During the summer of 2018, his father, Ron sold his house in Atlanta and bought a hi-rise downtown in Austin to be near Marshall. When announcing his retirement from comedy in Jan 2022, Ron revealed he had bought a penthouse space on the 22nd floor overlooking the Colorado River in downtown Austin, where his son, Marshall was living.

Does Marshall White Have A Wife/Girlfriend?

Marshall White, the son of the Tater Salad, is currently engaged to his wife-to-be Rachel Johnson, a native of Nacogdoches, Texas. The graduate of Full Saile University apparently asked his girlfriend to marry him in Feb 2020.

Marshall and his wife-to-be reside in Austin, Texas.

Is Marshall Rich As His Father, Ron White; What Is His Net Worth?

On one hand, Ron is reputedly an eight-figure man with his net worth resting above $40 million, thanks to his massive number of DVD sales and hundreds of shows. On the other hand, his son has a far less popular life; given that it seems improbable Marshall is also a millionaire much less wealthy in the bracket of his multimillionaire father.

The contrast of richness between father and son is quite apparent from the popularity of each of their names.

In 2013, the Texas-born comedian managed to make it to the list of Forbes’  top-earning comedians of that year. And considering the figure against the not so much as talked-about-profession of his son, Marshall, it’s pretty given his net worth is anything but in the region of seven figures.