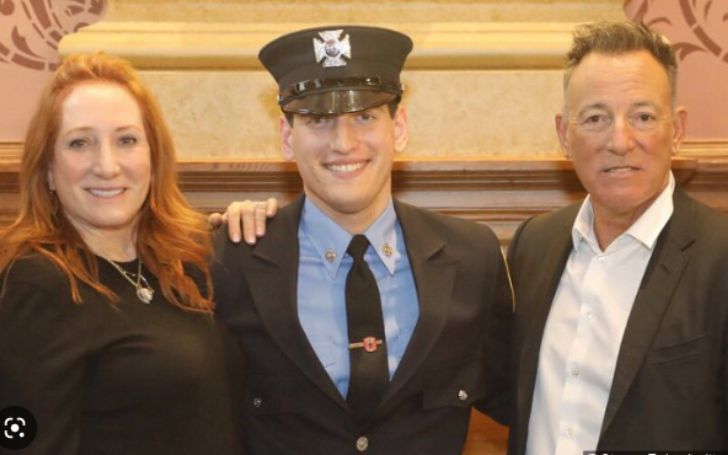 Sam Ryan Springsteen (aka Sam Springsteen) is a firefighter who is more popular as the youngest son of the legendary singer Bruce Springsteen and his long-term wife Patti Scalfia Springsteen. Besides, both of his parents are the members of E Street Band.

Unlike his parents, Sam pursued his career as a firefighter away from the media industry. Also, it was his dream job for which the star kid consistently worked. But what apart from his professional life? Does Samuel have a girlfriend or wife? His mom Patti posted about her having a granddaughter on her Instagram.

So, let’s enroll in the article below to find out detailed information about Bruce Springsteen’s son, Sam Springsteen.

The celebrity son was born Samuel Ryan Springsteen in 1994, making him 28 years old in 2022. He was born to his parents in Los Angeles, California, USA, and holds American nationality. And, the star kid celebrates his birthday on 5th January and was born under the sign Capricorn.

He belongs to Dutch, Irish, and Italian ethnic backgrounds through his father. Similarly, he has Sicilian and Northern Ireland descent from her mother’s side.

Also, all of Springsteen’s members come from different career backgrounds. His grandfather Douglas Federick Springsteen was a bus driver and was also involved in other jobs. However, Douglas suffered from mental illness for his whole life and later, unfortunately, passed away in 1998.

On the other hand, Sam’s grandmother was a legal secretary and the Springsteen family relied on her earnings. Continuing the career diversity of the family, Sam’s father and uncles chose different careers, apart from their parents.

The firefighter reportedly went to Bard College of liberal arts in New York. Prior to entering the college, Sam Ryan attended Ranney School, according to his IMDB profile.

Furthermore, Springsteen graduated from the Monmouth County Fire Academy in 2014. As he always wanted to be a firefighter since his childhood, he might have enrolled in that particular school. It was a step forward to chase his goal and pursue the dream he always wanted.

Sam Springsteen was born to his dad Bruce Springsteen (full name Bruce Frederick Joseph Springsteen) and his mom Patti Scalfia Springsteen. His father is an American singer and songwriter who is also popular as “The Boss.” Bruce has likewise released 21 studio albums and is a recipient of multiple accolades. He is the winner of twenty Grammy Awards, two Golden Globe Awards, an Academy Award, and a Special Tony Award.

Besides, Sam Ryan Springsteen’s parents came across for the first time in 1980 at the famous New Jersey Bar, The Stone Pony. The couple only lived ten miles from each other and after briefly dating, they walked down the aisle on June 8, 1991.

During the period, Patti even became a member of the E Street Band alongside her husband. The pair are together for more than three decades and are still living happily together.

Patti Is not the First Wife Of Bruce Springsteen

Regardless of the deep love between Sam’s mom and dad, she is not the first spouse of the Grammy Award winner. He was previously married to Julianne Phillips in 1985 but were only together for three years. The former couple filed for divorce in 1988 and finally parted ways in 1989.

Even before marrying his ex-wife, he was in a brief love relationship with Joyce Hyser in the early 80s. Nevertheless, after dating for some time, both of them have walked different paths and have moved on in their lives.

Sam Springsteen is the Youngest of the Three Siblings

Bruce Springsteen and his wife Patti Scalfia welcomed three children during their marital bliss. They are proud parents of two sons and a daughter. The mom and dad raised all their kids in New Jersey, where the “Dancing in the Dark” singer, Bruce was also born and raised.

Sam’s eldest brother is Evan Springsteen (born Evan James Springsteen), who currently works as a music and audio producer. His mother and father welcomed their first child Evan on July 25, 1990, even before they were married. Like his parents, growing up, Evan too developed a passion for music and decided to choose his career on the same path.

On the other hand, Springsteen’s sister, Jessica Springsteen is one of the leading U.S. equestrian riders. She was born on December 30, 1991, a year after her parent’s nuptial. In 2021, she even represented Team USA at the Olympics in Tokyo, which was a noble feeling for the whole family.

Needless to mention, the family of five shares a great bond together and is always happy to spend time with each other. Whenever Sam and his siblings go to visit their parents, the mom of three still cooks for her children and they have quality time together.

Well, there is no certain news of Bruce’s son Sam Ryan Springsteen tying the knot with anyone to date. Since the star kid is very private and doesn’t share much about his relationships and dating life, there is neither any information about his girlfriends nor his wife.

Looking at the age of Springsteen, Sam must have dated someone in the past or maybe engaged to someone at present as well. However, because of his secretive nature of not being public about his love affairs or other kinds of stuff, his love life is a mystery to many.

Apparently, many people assumed Bruce Springsteen’s son Sam once dated a girl named Grace Farren Spinosa. But, it seems to be like some baseless rumor as neither Sam nor his rumored-girlfriend Grace confirmed the fact.

He is the Father of a Daughter

Even though we are unaware of his relationship status lately, the news of Bruce Springsteen being a grandfather was all over the media in 2022. The news wasn’t confirmed at first until the proud grandmother posted her granddaughter’s picture on her Instagram. Patti Scialfa Springsteen shared a picture of her son Sam and his partner on July 16, 2022, where they were walking the baby.

The grandmother posted the picture with the caption,

The Springsteen family being vigilant about the child, haven’t disclosed any information about her. While they have let the public know the name and gender of the baby, further details are still behind closed doors. As of now, the only fact they have let out is, they have welcomed a baby girl and her name is Lily Harper Springsteen.

However, the details of Sam’s partner including her name and how long have they been in a relationship are still unknown.

Career Highlights: What Does Bruce Springsteen’s son Sam Springsteen Do?

As we mentioned earlier, Sam Ryan Springsteen always had a passion for fighting fires unlike his parents and elder brother. He was certified as a New Jersey firefighter in January 2020. His proud parents Bruce and Patti both were cheering for their youngest child sitting in the front row seat.

Prior to this, the High Hopes singer’s son also worked as a volunteer at Monmouth County Fire Department. Looking at the way Sam stepped on the stones one by one, we can say he was always sorted about what he wanted in life.

Talking about his net worth, Sam has amassed a fortune of over $1 million. The firefighter has achieved his goals on his own and is earning decent money enough to live a respectable life.

On the other hand, his father Bruce Springsteen is rich who has collected assets of $650 million throughout his career. Similarly, his mother Patti Scialfa Springsteen also is a multi-millionaire with a net worth of $50 million in 2022.