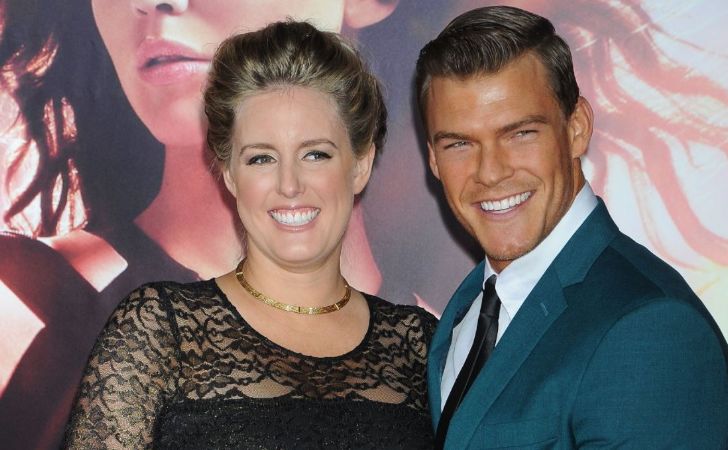 Catherine Ritchson, also recognized as Catherine Campbell Ritchson, is the wife of successful American actor Alan Ritchson. Her husband Alan is known for his works in movies and TV shows like Blue Mountain State, Smallville, Lazer Team. But unlike him, Catherine is not into movies but into finances.

A graduate of the University of Florida, Catherine is leading a successful career in the corporate world. Apart from this, she is also into politics and has associations with the local parties.

Besides, she is also a mother to three children with her husband. Want to know more in detail? Well, then continue with this article and find out some untold detail about Alan’s wife Catherine.

An American national, Catherine Ritchson was born on March 20, 1984, in Santa Rosa Beach, FL. Her father’s name is Ralph Bullard Campbell, and her mother is Georgia Rogers Campbell. She spent a large part of her life with her parents in her hometown and still shares a great relationship with them.

Talking about her education, in 2002, she joined the University of Florida, where she studies Bachelor of Science, Finance, and Russian. She finished her graduation in 2006. Well, the 36 years old has since been pursuing a successful career in her field.

She Is Leading a Successful Career In The Corporate World

Following her graduation, Catherine joined as a development intern at Comedy Central in June 2004. There she worked for three months until August 2004.

Well, at present, she is the vice president of Allycat Entertainment Inc, a company intended to produce and promote original content across a variety of genres. As for a fact, Allycat is founded by her actor, director husband Alan Ritch son.

Apart from her professional accomplishments, Catherine Ritchson is also interested in politics and has affiliations with Florida Democratic Party.

Catherine Ritchson Is Married To Husband Alan Ritchson With Children

University of Florida graduate Catherine is married to actor, director, and writer Alan Ritchson. The couple got married in 2006, after reportedly dating for years. Well, it’s been over 14 years and the couple is still going as strong.

The couple also has three children from their marital relationship, Calem, Edan, and Amory Tristan Ritchson. The youngest of all, Amory was born on December 6, 2015. He weighed 7lbs 12ozs at the time of birth.

Well, the Ghosts of War actor took to Instagram to share the good news. In a lengthy Instagram post, the actor addressed the fact that he is married and expressed his happiness for the arrival of the new baby in the family.

Similarly, like her husband, Campbell too shared a photo from the hospital room. The glad mom proudly stated the meaning of the name of her newborn writing,

“The name Amory means brave & powerful,” she wrote. “We chose his name to equip our third born to feel he could be as much of a leader as if he were the firstborn.”

The family of five has been leading a beautiful life together.

Who is Catherine’s Husband?

Like we have already mentioned, Catherine’s husband Alan is an accomplished actor, director, model & singer as well. He initially began his career as a model in Abercrombie and Fitch. Later, he worked with Los Angeles-based agency named Vision Model Management.

However, his career changed direction after he appeared in the 2004 season of American Idol. With enough eyeballs at him post appearance in the show, he made the use of fame making an acting debut in the TV series Smallville. He played a prominent role in the series from 2005 to 2010.

Similarly, he made his film debut in the 2006 movie The Butcher, where he played a character named Mark. And in his career of around 2 decades, he has appeared in dozens of movies and TV series. Some of his most successful works include Lazer Team, Blue Mountain State, Above the Shadows, and Teenage Mutant Ninja Turtles: Out of the Shadows, in which he appeared alongside Megan Fox, Stephen Amell, Will Arnett, and others.

Further, he also portrayed the famous character Gloss in 2013’s The Hunger Games: Catching Fire, alongside Jennifer Lawrence, Josh Hutcherson, and many others.

Many don’t know but Catherine is active on Facebook and Instagram. She has a profile on Instagram but the celebrity spouse has kept it private. She has over 3000 followers on her Instagram where she goes by @catritchson.

Similarly, Catherine Ritchson’s spouse Alan is also pretty popular on social media. As of January 2021, he has around 319k followers on his officially verified Instagram account. While he posts a lot about his professional life, but as a father, there are numerous photos of his beautiful kids.