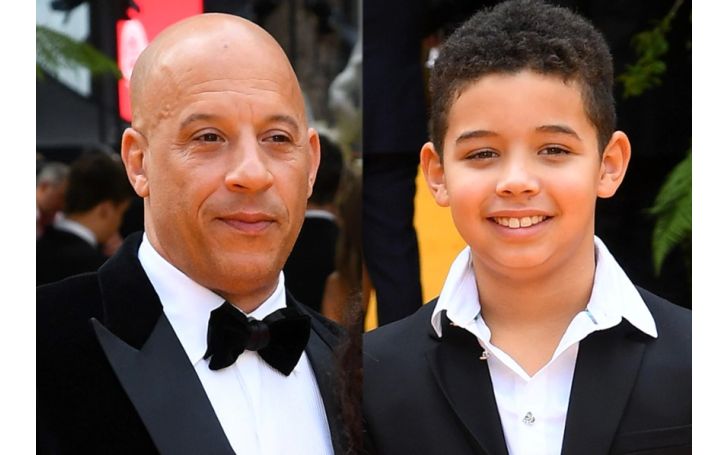 Vincent Sinclair is an American star kid who is famous as Vin Diesel’s son. His father became a renowned face from the Fast & Furious franchise.

As the son of a Hollywood star, it is apparent fans will wonder if Vincent is also interested in acting. Well, sort of. Vincent has once featured alongside his father, Vin in one of the installments of Fast & Furious.

Here today we’re going to find out all about Vin Diesel’s son Vincent Sinclair. Here are all the interesting facts about Vincent including his wiki, net worth, career, interests, and more!

Vincent Sinclair Wiki: Who is his mother?

He was born on April 3rd, 2010, in Los Angeles, California. He is the second child between Vin Diesel and Paloma Jimenez. His name is inspired by his paternal grandfather’s surname Irving H. Vincent.

Now talking about Vincent’s ethnicity, he belongs to the mixed ethnicity of Caucasian and Hispanic. While his father Vin comes from English, German, and Scottish roots, his mother is Mexican.

Is Vincent’s Father’ Half African-American?

Ever since Vin made his debut in the film industry, he has been asked a lot of questions pertaining to his ethnicity. At the beginning of his career, many directors thought he was either too black or too white.

Although to this day there is no sign of Vin Diesel’s father, he has mentioned several times that he is culturally and racially ambiguous. He said,

“I don’t know what I am. I’m a combination of many things. I never knew my biological father. I’ve always had less information than I would have liked to have had. All I know from my mother is that I have connections to many different cultures.”

Moreover, Vin, born Mark Sinclair, was raised by his step-father, Irving H. Vincent, who is an African-American.

How many siblings does Vincent have? His youngest sister

He has two sisters, one older and one younger. His parents gave birth to their first child, Hania Riley Sinclair on April 2nd, 2008. Then after Vincent was born in 2010, his youngest sibling, Paulina was born on 14th March 2015.

All three of the siblings were born in Los Angeles. Vincent’s youngest sister Paulina was named after the late actor Paul Walker. Paul worked alongside their father in the Fast & Furious installment. He tragically passed away at the age of 40, after a brutal car accident.

Vincent’s sister Hania walked down the same path as her dad and became an actress. She once lent her voice in the series, Fast & Furious Spy Racers.

His Parents Relationship: How did it all begin?

Of all the relationships in Hollywood, Vincent’s parent’s relationship is one of the most followed ones. Vin and Paloma first started dating back in 2007. At the time when they started going out, Vin was already 40-year-old while Paloma was 24.

Thereafter, they were seen in several events including many red carpet events. Paloma joined her boyfriend during the premiere of his movie, Riddick, and also during Vin’s induction into the Hollywood Walk of Fame.

Given Vin and Paloma have been dating since 2007, they are certainly married, right? Well, no. Despite their long-term relationship, the lovebirds are yet to marry one another.

There are several tabloids who claim Vincent’s mom and dad are married but have kept the information a big secret. Nevertheless, it’s all speculations by the media.

Besides, to this day, neither Vin nor Paloma has ever talked about their marriage or have any plans to marry. Looks like the pair is happy with their current state of affairs and truth be told when you are together for so long, marriage becomes just a formality.

Vincent Sinclair’s is an Actor: He appeared with his father

As an actor’s son, the first course of action for him would be to follow in his dad’s foot-step. Likewise, Vincent has indeed become an actor, like sort off.

He made his acting debut in the ninth installment of the Fast & Furious franchise. In the movie, he portrayed the younger version of his father’s character, Dominic Torretto.

For the movie, he even got a daily paycheck of $1005. Quite a heft paycheck, and that too for a child, isn’t it!

Now before any of you even think that Vincent got the opportunity to play the role because of his father then you are most definitely wrong. It was Fast 7 director Justin Lon who wanted Vincent to be in the film.

About his son’s role, Vin said in an interview,

“I didn’t invite him to play a role in this. The Fast family is so truly a family. Justin thought it would be a good idea for him to play younger Dom.”

As a star kid, Vincent lived a rather lavish life. His father Vin currently has an estimated net worth of $225 million. He earned such massive net worth through his work in the Fast & Furious franchise.

Moreover, Vincent is also earning pretty handsomely through his acting career. The Vin Diesel lookalike will definitely be one of the top earners in Hollywood if he goes at this rate.