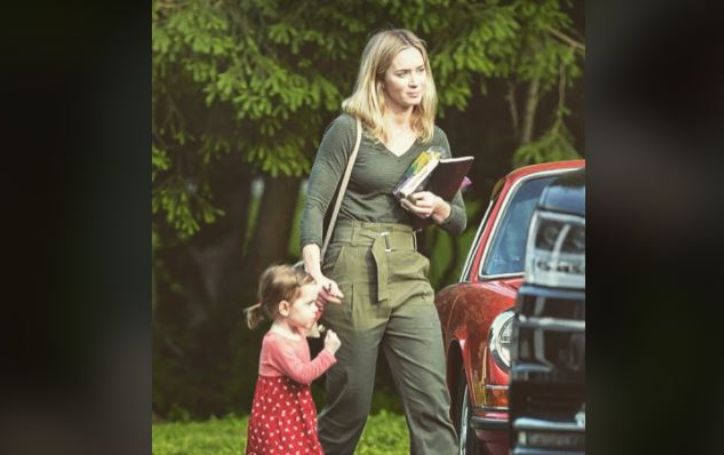 Violet Krasinski is the littlest among the two daughters of actor couple John Krasinski and Emily Blunt. The former is famous for portraying Jim Halpert in the NBC sitcom, The Office while the latter for her roles in films like The Devil Wears Prada, Edge Of Tomorrow, A Quiet Place, and others.

While Blunt and Krasinski do not shy away from displaying their affection for each other, the actors are pretty low-key when it comes to revealing information about their daughters, Hazel and Violet. The Hollywood couple is very conscientious about keeping their kids out of the spotlight.

John doesn’t post about his daughters on his social media (and Emily doesn’t even have social media!), and the girls have so far never accompanied their parents to red carpets or other events. The two do not have any sons. The celebrity parents though time and again often talk about how much their girls mean to them and a bit of a sneak peek of how they are growing up. And what they have shared so far is both adorable and hilarious.

Keep scrolling for what John and Emily have let out about their daughters; though in this case especially about Violet Krasinski.

When Was Violet Krasinski Born?

The second daughter of Krasinski and Blunt, Violet Krasinski was born in June 2016. The news of her birth, however, didn’t hit the media until a few weeks later on July 4.

“What better way to celebrate the 4th… than to announce our 4th family member!!! 2 weeks ago we met our beautiful daughter Violet #Happy4th”

Why There Aren’t Many Pictures Of Violet Krasinski?

Krasinski once, through his Twitter, stated pictures of kids should only come direct from parents themselves. This he declared while putting out the news of his first daughter’s birth.

“Pics of kids should only come direct from parents. So I’m thrilled to introduce you guys to Hazel!!!,”

Krasinski wrote back in 2014, three months after his first daughter, Hazel was born, alongside the first official photo of his baby girl. Since then, both actor-parents have largely kept photos of their children off social media.

And it is mostly the reason why people haven’t seen much of Hazel and her sister, Violet.

The Reason Behind Her Name

Blunt while on Ellen DeGeneres’ show, said the nature of her daughters’ names is because of her family tradition of choosing “old lady names.”

Emily also described with Violet she forgot that she was even pregnant as she had already become the most self-indulgent during her first pregnancy.

Blunt and Krasinski additionally during the welcoming of their second daughter told TODAY they had become pregnancy pros by the time Violet was on her way. And they thanked it to their first daughter.

Blunt’s pregnancy with Violet coincided with the shooting for the actress’ 2016 film, The Girl on the Train.

Violet Krasinski Has One Elder Sister

Even in the case of Hazel, Blunt and her spouse had announced the news of her arrival only after three months of her birth. And it was two years later that they birthed their second daughter, Violet. Accordingly, the girls very much aren’t twins despite some hearsay.

Paternally, Violet is mostly Polish and a bit Irish. As from her mother, Emily’s side, she is English, as well as distant Scottish and Welsh

Violet’s maternal family lives close to Richmond Park, UK. She and her sister, Hazel attended in-person school in London amid the COVID-19 pandemic 2020.

The question and the wonder have been reported to have stemmed from the fact that John plays the father of actress Millicent Simmonds’ character, Regan in the 2018 hit thriller movie, A Quiet Place.

Interestingly, Simmonds is also deaf in real life; prior to turning 12 months old, she lost her hearing due to a medication overdose.

She though is not Krasinski’s real daughter nor do the actual daughters of his have any sort of speaking disabilities.

Violet Has A British Accent

In an interview with Jimmy Kimmel in Dec 2020, Blunt told her daughters have since developed British accents because of it.

While talking to Kimmel, the Sicario actress said her daughters had begun sounding quite British, especially her youngest, Violet who she said had really embraced her new accent. Blunt added her second daughter once sang to her in an almost Cockney [accent].

John And Emily’s Daughter Once Lost Her Accent; Was It Violet?

Blunt once revealed she found it annoying that one of her daughters was developing an American accent. It however was her eldest girl, Hazel.

“Hazel had my accent for a really long time and would say things like ‘water’ [in a British tone], which I was really proud of. And then the other day she goes [in a whiny American accent], ‘Can I have some water?’ I was like, ‘Nooo!’”

Mrs. Krasinski once told Jimmy Fallon on The Tonight Show.

Violet’s folks are among the favorite celebrity parents.

They started dating each other in 2008 and got married in July 2010 at George Clooney’s estate in Lake Como, Italy.

The pair have long since enjoyed a reputation as one of the most well-liked couples in Hollywood. The two daughters’ parents have exceptionally weathered any negative publicity thrown their way.

Worth mentioning here would be the fact that Violet’s father, John while being good friends with his Office co-star, Jenna Fischer, he never really dated her.

Krasinski and Fischer both went on to have relationships with different people at the same time. Fischer is now the wife of actor Lee Kirk whom she met in 2008 while Krasinski met Blunt through a friend at the same time.

John and Emily have made it clear that they don’t even want Hazel and Violet to know that they’re famous. The couple does have spoken out many times about how they want to shroud their fame from their daughters.

The British-American parents of two so it seems also do not use the word “famous” at their home especially when Violet and Hazel are around.

In a new interview with the Sunday Times in May 2021, Blunt explained why she doesn’t want her two daughters knowing mom and dad John Krasinski are famous.

“I don’t want my kids to feel any more important or special or that there’s a glare on them any more than other kids,” she explained. “If they can remain oblivious for the longest time, I’d be thrilled. They don’t even want to see what I do,”

said the London-born actress. When asked if there ever will be a chance to see her and John’s kids on the big screen, Blunt said,

“God no—no! Please God keep them off the stage.”

Talking about the potentiality of her daughters getting into the film industry, Blunt said, “If they can remain oblivious for the longest time I’d be thrilled.”

On the other hand, Violet and her sister apparently also didn’t know their parents were famous during their toddler years. Emily says her girls often don’t even want to see what their mother does.

Further, Violet and her sister reportedly also don’t even like it when Blunt puts on makeup. Despite that, Emily once revealed her first daughter Hazel has already had a bit of an idea about her parents’ celebrity status.

How John And Emily Are Raising Violet And Her Sister, Hazel

While Violet’s parents are doing their best to keep her and her sister away from Hollywood, their mother has revealed she’s raising her girls to be empathetic.

It was once reported that Blunt and her husband were working on teaching their daughters empathy. The British actress in an interview said she encourages empathy in her kids and the act of embracing differences and not being scared of them or teasing people for them.

She likewise said how she was talking to her girls about making mistakes and trying to learn from them.

Violet Krasinski And Hazel Designed T-Shirts For A Charity

During the COVID-19 pandemic, John and Emily’s daughters, Hazel and Violet decided to do a little giving back to the community.

Krasinski once told chef Guy Fieri on his Some Good News YouTube show that his two girls designed a t-shirt with proceeds going to the Restaurant Employee Relief Fund.

The Krasinski-Blunt family did this in an effort to help raise money for employees working in the restaurant industry that took a significant toll during the 2020 pandemic.

The celebrity children designed t-shirts and tote bags with all proceeds going to Guy Fieri’s initiative with the Restaurant Employee Relief Fund (RERF).

Violet Has Gotten Mentioned On SNL

Violet’s father, Krasinski took his daughters’ name to SNL in Jan 2021. Turns out, The Office actor John Krasinski always has his daughters on his mind, even when he is busy hosting the insanely popular American show Saturday Night Live (SNL).

Krasinski, who made his hosting debut on SNL in early 2021, gave a special shout-out to his daughters, Hazel and Violet.

John during his first episode of ‘SNL’ featured in a ‘The Office’ themed monologue and a variety of sketches, including one in which he created lyrics for ‘The Office’ theme song. At the end of the night, the father of two wore a special shirt in honor of his children, while thanking musical guest Machine Gun Kelly and the cast during his closing remarks.

The Jack Ryan actor and director had the initials of his daughters Hazel and Violet stitched on his final outfit. As he concluded the show, Krasinski wore a black crew neck sweater with “H + V” written in white letters.

Violet apparently didn’t find her mother playing the iconic role of Mary Poppins in the Disney movie Mary Poppins Returns all that impressive.

In fact, she turned out to be the only person from her family who had no interest in seeing it.

Emily Blunt’s daughter Violet not wanting to watch Mary Poppins Returns because her mum is in it pic.twitter.com/FT8Ekw2S7n

Blunt while talking with DeGeneres in January 2020 said when John asked Violet if she would want to watch a movie, at first her answer was Mary Poppins. But her daughter no 2 wished to see Julie Andrews instead of her mother’s.

Violet Is Also Into Music

Although Violet & Hazel are still growing up, their father John has revealed the former is already showing interest in music. During an appearance on The Ellen DeGeneres Show in February 2018, the Boston-born actor recalled the time Violet started singing in an extremely low octave.