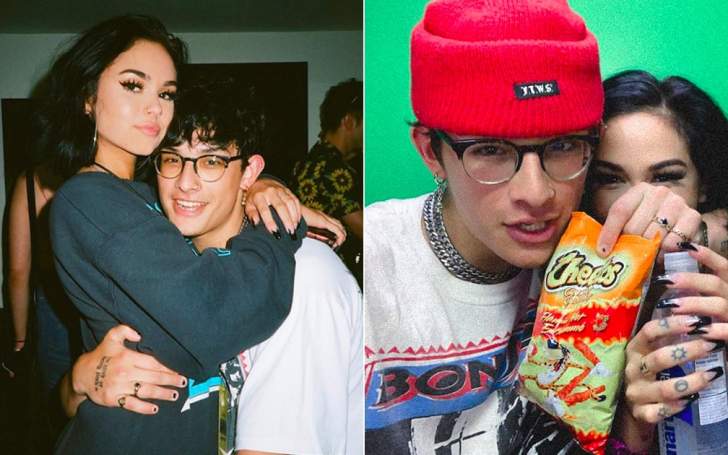 They’ve been going out since 2019, however, they don’t usually share a lot of pictures together. This makes their fan anxious whether the duo is still together or not.

Fret not, as today we’re going to find out about the state of their relationship in 2020. Furthermore, let’s about the duo’s past affairs as well.

Who is Brandon Arreaga girlfriend in 2021? Is it Maggie Lindemann? The State of their Relationship

Both Brandon and Maggie are superstars, who are already on their way to become the greatest. Brandon is a member of the pop band, PRETTYMUCH, whereas, Maggie is a solo artist.

Nevertheless, aside from their professional life, their romantic affair is also a big subject of curiosity for many.

Initially, the couple made their romance official in 2019, and since they’ve been literal goals for their fans. Even though the duo doesn’t share every candid detail of their love life, a few pictures still say a lot about it.

And what about the birthday picture both of them share one another’s born day.

The caption itself explains the true feelings they have for one another. This isn’t the first relationship for both of them, even so, fans are hoping this should be it.

What’s more, Maggie’s fans are even urging her to marry the guy. Well, it’s all good to be hopeful, but we should realize the Maggie and Brandon are still young.

The couple took literally everyone by surprise after news of them dating came out. Since early 2019, there were persistent rumors about their affair.

Then on July 21, Brandon posted Maggie’s picture on the occasion of her birthday 21st birthday. The caption was pretty much self-explanatory leading up to confirm their relationship.

The majority of his fans were happy while some were a bit sad due to the fact that they couldn’t date the singer.

Speaking of past relationships, fun fact, both Brandon and Maggie apparently look like each other’s exes.

For Brandon, he was previously in a relationship with Charlotte Dean. It is reported they dated from 2017 to 2018. Their relationship was so romantic and beautiful that many of his fans still want him to get back with her.

What’s more, many of his fans even see a striking resemblance between his current GF, Maggie, and ex, Charlotte.

On the other hand, Maggie was involved in a couple of relationships before committing to Brandon.

Back in 2014, the Pretty Girl hitmaker dated fellow social media influencer, Carter Reynolds. They first came across each other in early 2014.

Their relationship turned ugly after a leaked video showed Carter forcing his then-girlfriend 16-year-old girlfriend to perform sexual acts on him. Further, he was even recording the whole thing.

As soon as the video got out, the duo broke up and Carter’s career went down the hole.

Afterward, in 2016, she reportedly hooked up with web star Mikey Barone. The duo was seen getting cozy and cuddly in a Snapchat post by Maggie. Furthermore, she even kissed Mikey.

Their relationship, however, soon fizzled out.

In 2017, she was linked with YouTuber Brennen Taylor after he shared a video with her title, ‘Meet My Girlfriend.’ Later, in May of the same year, he added yet another video, titled, ‘How I met my girlfriend.’

The duo dated for around a year before calling it quits. After the break-up, he changed the title of his videos and in place of girlfriend, he has now written, ex-girlfriend.

As for a fact: Brandon is a member of PRETTYMUCH along with other members that include Austin Porter, Nick Mara, Edwin Honoret, and Zion Kuwonu.