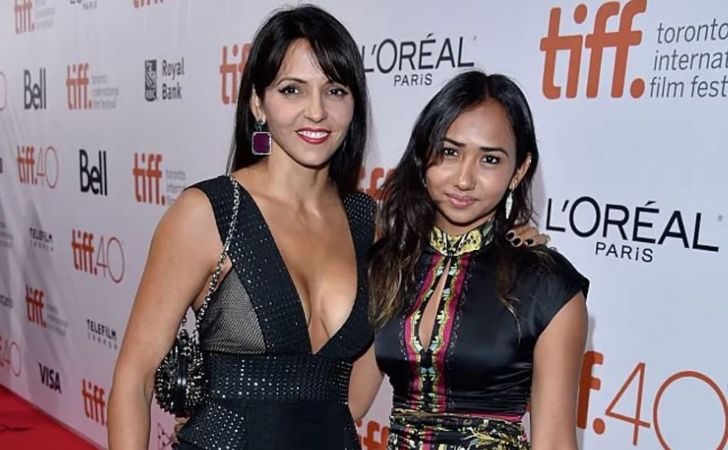 Alexia Barroso is an aspiring actor, who has already made an appearance as a child actor in the 2011 film We Bought a Zoo. She is also widely famous as the step-daughter of actor, & producer Matt Damon. Her father is an Academy Award winner known for works in The Great Wall, Elysium, Interstellar, & many others.

Since Alexia’s mother Luciana Barroso married Matt, she is being raised by her stepfather Matt, but who is her biological father? Well, in this article, we are going to explore all the facts surrounding her parents, career, age, relationships, and all other details.

Who is Alexia Barroso’s Father? Details On Her Early Life

To all those who are unaware, Alexia is the biological daughter of Luciana Barroso and her ex-husband, Arbello Barroso. She was born in 1999, in the United States. She is the only daughter of the couple together.

Like any kid, Alexia shared a great relationship with both her mother and father. But as fate had it, her parents divorced around 5 years after her birth in 2004. Unfortunately, they did not reveal the reason behind their divorce.

Well, talking about her education, attended New Roads School and now studies at The New School.

After Alexia’s mother Luciana divorced Arbello, she went on to marry American actor and producer Matt Damon. The couple met for the first time while Damon was filming Stuck on You in Miami in April 2003. Soon after their first meeting, the couple clicked and began dating.

In September 2005, they finally got engaged. They had their wedding at the Manhattan Marriage Bureau on December 9, 2005, in a private civil ceremony.

Ever since their marriage, the Good Will Hunting star has adopted Alexia as her step-daughter. In fact, he treats her no differently than his own kids. Back in a 2011 interview, Matt appeared as a protective father, pretty concerned about his growing teenage daughter.

The actor candidly stated that he does not want Alexia to grow up because he knows “just what teenage boys are thinking”.

Besides, Luciana also stated on multiple occasions that Matt is the best step-father Alexia could ever have. In one of her conversations with Star Magazine, she stated,

I couldn’t possibly have asked for a better stepfather for my daughter than Matt. He treats Alexia like she is his own flesh and blood. Matt has been an absolute blessing for my daughter.

Alexia Has Three Step-siblings From Her Mother’s Second Marriage

In case, you are unaware, Alexia is not the only child in the family. She rather has three step-siblings, Isabella, Gia, & Stella, who are all from her mother’s marriage with Matt.

The eldest of all Isabella Damon was born in June 2006. The duo had earlier announced the news of the pregnancy in December 2005. The couple welcomed their second child, again a daughter Gia Zavala Damon in August 2008.

Similarly, the third and youngest daughter of the couple Stella Damon was born in 2010. Well, Alexia Barroso shares a great relationship with all her siblings. They are even spotted together at public events.

The family of six resides in the Pacific Palisades neighborhood of Los Angeles since 2012. They previously lived in Miami and New York City.

Matt is indeed the best father one could ever have. He is so much in love with his kids that he has even inscribed the name of all his daughters in his upper arms.

The names are written in a delicate, cursive font, and it no doubt reflects the love she has for his children. Moreover, his love is very much reflected in his interviews where he never misses to praise his kids.

Back in 2015, in an interview with ET Online, he did not miss talking about being a father. He said,

I think everything changes in little wonderful ways. My whole life opened up when I became a dad. I’m very much on the receiving end of all the good stuff.

Among all the victims of the coronavirus, Alexia is also the one who tested positive for the virus as a college student in New York City (NYC). The news about her contamination with the virus was made public by Matt in an interview on Fully Charged with Graham & Nathan.

Talking about Alexia who was in New York when she got infected, Matt said,

But she’s in New York City, and she had COVID really early on, along with her roommates, and got through it fine.

Further, her dad Damon revealed her daughter Alexia went to college in New York City. Meantime, Damon along with his other daughters, Isabella, Gia, and Stella, were in Ireland as he was shooting for The Last Duel.

Alexia Is An Actress By Profession

As we mentioned earlier, Matt’s daughter is also an actress like her father. However, she has not officially started a career in acting and has only appeared in a few movies.

Back in 2011, she played a zoo staff in the movie We Bought a Zoo which also stars her father along with other actors including Scarlett Johansson, Colin Ford, and many others.

Further, she also contributed in some way to Ford v Ferrari. Even the producer of the movie thanked her for her unrevealed contribution.

Who Is Ali Astin? Everything About Sean Astin’s Daughter; Her Career, And Boyfriend