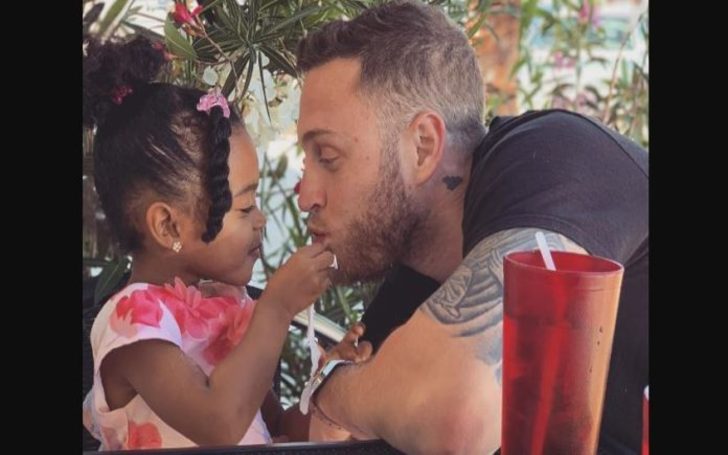 Michaiah Hanks is the daughter of actor and musician, Chester Marlon Hanks (Chet Hanks) and Tiffany Miles. Michaiah is better known as the granddaughter of veteran actor, Tom Hanks. Her father, Chet Hanks has notable roles in shows, “Empire” and “Shameless.”

Chet’s daughter wasn’t born out of a serious relationship, but her father considers her to be the best thing that has ever happened to him. He claims Michaiah helped him a lot to turn his life around. At any moment, he doesn’t miss mentioning how much his daughter means to him.

But who is Michaiah’s mother? How she came to know Chet Hanks? Were they just friends? Also how much does Tom, himself adore Michaiah? Know all these in the details below.

Michaiah Hanks’ Parents Were Never In A Relationship

Hanks was born in April 2016. She is of Greek, Bulgarian, Portuguese, and English descent from her father’s side. Maternal-wise, Michaiah has African-American ancestry. Her mom is from Indio, California.

Michaiah’s mother, Tiffany Miles was neither Chet’s girlfriend nor had they any sort of romantic relationship. From what it’s heard, they just had a one-night stand while the celebrity’s son was drunk.

Chet, however, says that the woman who gave him his daughter is the sweetest person he has met so far.

The heavily tattooed artist also paid a heartfelt tribute to his daughter’s black mom, Miles, amid the George Floyd protests. Added with a series of Instagram photos showing him standing in front of Geroge Floyd’s artwork, Chet wrote about how thankful he was for Tiffany, calling her “the mother of my child and a beautiful black woman.”

Chet Took His Instagram To Announce His Relationship With Michaiah

Tom and Rita’s son, Chet took the news in a video to his Instagram to announce his relationship with Michaiah. The post though has since been deleted. In the video, the actor/musician said,

“I want to share something today because it’s about to be shared anyway in the press, which is the fact that I have a daughter. I do have a daughter, she’s the best thing that’s ever happened to me, she’s the reason why I turned my life around and got sober.”

Chet, at the time, also revealed that he’s been sober for over a year and a half from everything. He added his daughter is not something to be posted and that she’s something that he loves, that’s changed his life.

However, it was only in February 2019, that the proud father stepped out for the first time with his daughter Michaiah Hanks in La Quinta, California.

Albeit quite an experience with screens, Chet Hanks is yet to garner the massive fame his dad has gained over the decades. Michaiah’s father nonetheless had recurring roles on hits like Empire and Shameless. He also appeared as Joey Maldini in the Showtime legal drama miniseries Your Honor. Some of the films he’s been in include Bratz, Indiana Jones and the Kingdom of the Crystal Skull, Larry Crowne, Project X, Fantastic Four, and Greyhound

In addition to acting, Chet is also a musician/rapper. In 2011 he recorded “White and Purple” under the alias Chet Haze. The song was a remix of Wiz Khalifa’s single “Black and Yellow.”

In 2016, Chet with Drew Arthur formed the musical duo FTRZ. Two years later they released two singles (“Models” and “NowhereLand”) as well as the Ocean Park EP. After that, the duo released two tracks in 2020, “Harley” and “Ticket Out My Head” under the new name Something Out West.

Michaiah’s mother, Tiffany Miles is a graduate of California State University. She is also doing an internship at Moguldom Media Group LLC. Miles is in the news industry in Downtown La. She helps with managing YouTube, Twitter, and Email accounts. Her other jobs include operating teleprompter during live shoots, processing documentation, and preparing equipment for red carpets appearances

As discussed, Michaiah is born into a famous family. Her grandfather needs no introduction. The grandad, Tom is one of the most popular and recognizable film stars worldwide and people around the world regard him as an American cultural icon.

Tom is known for films like Splash, Bachelor Party, Big, and A League of Their Own. He is the winner of two consecutive “Best Actor” (Academy Awards) for Philadelphia (1993) and the title character in Forrest Gump (1994).

Michaiah’s granddad was first, husband to late actress Samantha Lewes from 1978-87. Their son Colin Hanks is also an actor. Tom and Samantha also had one daughter, Elizabeth Hanks.

The Forrest Gump actor has been in a 33-year marital relationship with actress Rita Wilson (also Michaiah’s grandmother). Hanks and Wilson have two sons. The older Chester Marlon “Chet” Hanks, is Michaiah’s dad and the younger son is Truman Theodore, who was born in 1995. The Hanks family live in Los Angeles, California, and Ketchum, Idaho.

Michaiah’s Relationship With The Hanks Family

The Hanks family is absolutely in love with Michaiah and as per an insider,

“They (the Hanks) have fallen in love with the little girl. They adore that baby and even spent Halloween with her. She will always be loved and taken care of by the Hanks family.”

The low-key rapper got some help from his Oscar-winning father, as Tom helped Chet with his financial expenses including his rent of $2,800 for his Santa Monica home. The Forrest Gump actor also provided aid for Chet’s daughter, whose full custody, at the time, was in the hands of Tiffany.

Rita Wilson and Tom Hanks once opened up about being awesome grandparents to their grandchildren including Michaiah.

“I think [we’re] the coolest,” her longtime husband added.

Tom and Rita agreed they don’t feel the need for TV, radio, or books when their grandchildren are around. They though added their grandkids just put up with them. “Sometimes they just look at us like, ‘What?” Wilson revealed.

Hanks’ father, Chet struggled with addiction in the past. He though has been candid and apologetic about them in several interviews.

In November 2014, Chet revealed he had battled substance abuse since age 16 but got sober in his mid-20s. In June 2015, he made headlines for slurring the N-word, on Instagram. Weeks later, some sources reported he had gone missing.

Through his Instagram video, he revealed he was selling coke, doing them until he couldn’t even snort it up to his nose anymore ’cause it was so clogged.” Michaiah’s father said he even smoked crack. He also once trashed a hotel room, posed with Guns, and had several stints in rehab.

Michaiah Helped Her Father Get Sober

As mentioned, Chet has quite a reputation for doing things out of order; the star has got himself into drugs that have in turn got his famous parents in trouble as well.

In mid-2016, Michaiah’s father caused a car accident, while allegedly, under the influence. Chet, however, was driving his parent’s car. Later, the victim, whose name was Terry Morgan, sued them.

Chet, himself suffered a whiplash and a brain injury. Parties and trouble were all that used to define the first child of Tom and Rita.

Fast forward to the present, those days seem to be behind him and Chet credits this all to his daughter, Michaiah. The Empire star says his daughter is the best thing that’s ever happened to him. He claims Michaiah is the reason why he turned his life around and got sober. “I’ve been sober for over a year and a half from everything,” said the Shameless actor.