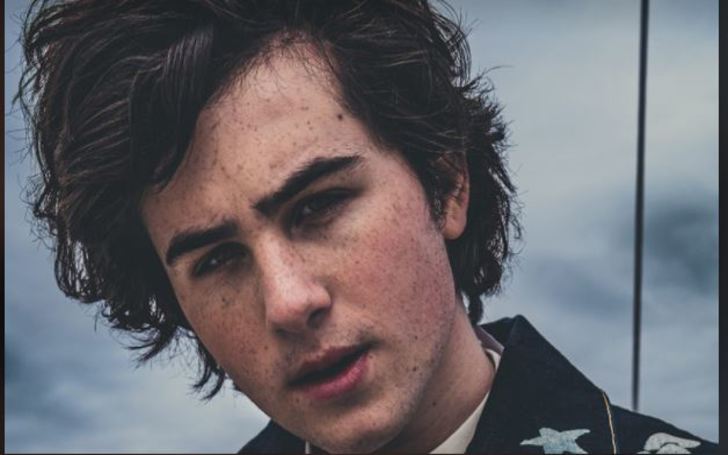 Taj Cross is an actor and one of the Gen-Z fast-rising stars with his performances as Gabe and Sam in Young Rock and Hulu’s, PEN15, respectively.

The former series retells the life of Dwayne ‘The Rock’ Johnson, from the actor’s formative years to being a global superstar. PEN15, on the other hand, is a Hulu cringe comedy streaming television series, from the creator, Maya Erskine, Anna Konkle, and Sam Zvibleman.

Cross’ awkwardness in Pen15 and as a sidekick character in Young Rock definitely add that extra fun to both shows. Know more about his life; how he made it into the acting, his personal life, and so on.

Taj Cross Mother Is A Designer

Cross was born on Feb 11, 2004. He is the son of Christina Karras, a stage artist, and an interior designer. He also has an elder sister, Cammy Cross.

The now 17-year-old actor, however, hasn’t mentioned who his father is.

Cross discovered his passion for acting when he was in fifth grade. He, though, at the time was all about sports. The future Young Rock star played three sports every day.

He was also in a bunch of leagues. In an interview, he disclosed he at the time he used to run so much that he once felt like his heel had crumbled into a million pieces. Eventually, some injuries led him to take a break from the sports.

It was during these times, one of his friends took him to a musical theater class. Cross attended it and the teacher included him in all the exercises.

The teenage celebrity says he fell in love right away and after about two years he said to his mother that he wants to go into film.

So Far, He Has Acted In Two Shows

He made his acting debut in 2019 as Sam in the first episode of the HULU series, PEN15.

Taj had been auditioning for a while even before his first role as Sam in PEN15. In fact, before having his first TV appearance, the only things, he says he was doing, were self-tapes and auditions.

Taj Cross also auditioned for the show Kidding. While talking to Celebrity Haute Spot, he said “After auditioning for about a year, I screen-tested for Jim Kerry’s son,” Will in the show Kidding. The role went to Cole Allen.

As mentioned, he’s also famous for Young Rock as Gabe. In the series, Cross acts alongside the main star, Stars Bradley Constant. Taj’s character, Gabe is Dwayne’s right-hand man during his high school.

He revealed when his manager and agent sent him the audition for the Young Rock, he looked at it and knew it was for the Rock, the Dwyane Johnson. After that, he immediately decided to go for it.

Christina’s son is yet to have his debut in the movie.

Does Taj Cross Have A Girlfriend?

From what it appears, the dark-haired teenage actor, Taj Cross is hardly in any sort of romantic relationship. Or at least that’s what his activities on his social media insinuate.

Although the young thespian is occasionally seen hanging out with girls his age, none of them seems to have any sort of special bonds with Cross.

However, there is one fellow teenager, a girl by the name Tali, with whom, Taz seemingly hangouts more than often, as per his Instagram handle. Further, the duo’s dynamic, for the outsiders, look as if they are more than just some BFFs.

Still, the answer to who is his real girlfriend or if he even has one is only up to a matter of time.

Taj Says The Actor, Heath Ledger Is His Inspiration

When asked who or what has had the biggest influence on his career, Cross responded by saying,

The PEN15 actor said what really inspired him was the first time he watched The Dark Knight with the late Australian actor playing the Joker. Taj also considers the Dune star Timothée Chalamet as one of his inspirations.

He Wished To Be In The Show, Breaking Bad

When telling more about himself, Cross also revealed how he became a fan of the AMC crime-drama series, Breaking Bad.

He also added ever since he finished watching the show, he wished he somehow could be in its universe. The brown-eyed star though admitted the chance of being that is quite impossible considering the series ended more than a decade ago.

As for a current show, he expressed his desire to be in The Mandalorian, of the Star Wars world. Cross confessed he is also a huge fan of the intergalactic action saga series.