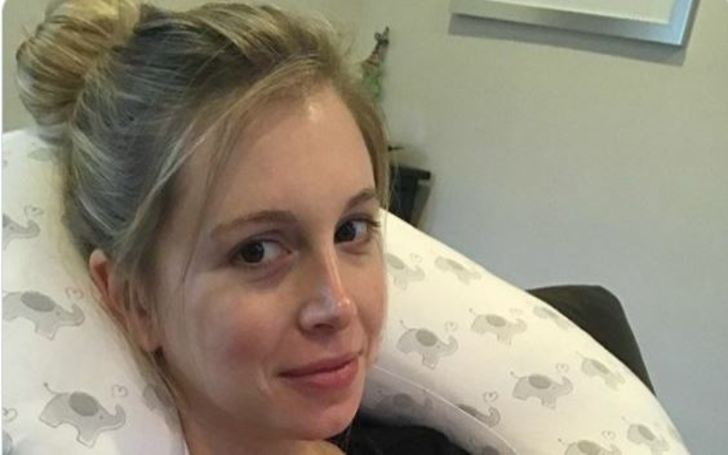 Wild has been in journalism for over 13 years during which she has covered sexual predators, terrorism to shocking 2021 capitol riots. She is also the winner of several prestigious reporting awards.

Know all about her professional achievements along with some pristine facts about her personal life; her husband, her married life, children, and much more in the occurring details.

Whitney Wild Graduated From The University of Michigan

Wild was born on January 21, 1988, in Michigan. Not much about her life is known as of yet. She, though, is believed to have been grown up in Michigan.

Whitney Wild studied at the University of Michigan, class of 2010. A member of the Sigma Kappa group, she graduated with a degree in comparative literature, sub-concentration in Italian Language and Literature. Wild did her master’s in journalism, reporting, and business from Northwestern University; says her LinkedIn.

Whitney Wild’s Career As A Reporter

Three years later, Wild became a contributing author for the Michigan Independent. During the same time, she also got a position at the Michigan Daily as its staff reporter. In May 2010, she interned at the production team of WTVS in Detroit. Wilde oversaw all WTVS’ social media for the 2010 Michigan gubernatorial debate.

She also interviewed Michigan Governor Rick Snyder and other members of the Michigan legislature for the interactive voter guide MiVote.

In Sep 2010, the University of Michigan graduate became the production assistant of Fox Sports. A year later in Dec 2011, she started reporting for ABC 7 (WLJA-TV) in Washington DC, Metro Area. Her reporting as a multimedia journalist for the ABC prompted the U.S. Marshals to arrest a child sex predator. As a WLJA-TV reporter, Whitney also landed exclusive interviews with members of the Special Response Team who took down Boston Marathon bombing suspect Dzhokhar Tsarnaev.

In June 2013, for the compilation of day-turn stories, the former student of Northwestern University received the Chesapeake Associated Press Broadcasters Association for Outstanding TV Multimedia Journalism.

Wild next respectively began covering for KUSA and WUSA-TV before becoming correspondent for CNN.

Wild Is The Recipient Of Two Emmys

While reporting for Kusa or 9 news in Denver, Wild broke dozens of stories. She earned a Heartland Chapter Emmy Award for her reporting on the anniversary and the meeting of two survivors of a plane crash during Operation Babylift. The one which President Gerald Ford had ordered to rescue thousands of children from war-torn Vietnam in 1975.

While in Denver, Whitney exposed a dramatic decrease in Denver’s DUI enforcement and traffic unit. She also brought attention to an explosive hash oil trend with exclusive interviews and videos.

At WUSA 9 in Washington, D.C., the literature student was on the investigative team. She received a National Capital Chesapeake Bay Chapter Emmy Award for her reporting on discriminatory property advertising and rental practices affecting federally subsidized housing voucher holders. In consequence of her reporting, lawmakers in the nation’s capital expanded efforts to combat housing discrimination based on the source of income.

Wild is indeed married. In fact, she is the mother of three children. The Washington DC communicator, however, is yet to reveal her husband. She has been, on occasions, spotted with a wedding ring, but Wild has hardly talked about her husband.

In April 2020, the Emmy-winning reporter sort of talked about her husband albeit in a marginal context. Sharing about an incident where her children mistook her for swearing, Wild also mentioned her husband.

Virtual circle time is going great and everyone is enjoying it! Just as my husband took the 3YO off mute, she screamed “YOU SAID THE F WORD MOM!” Which is so unfair bc for once I actually DIDN’T say it. (I just thought it.)

tweeted the ex 9, news correspondent. However, so far that has been the only time where she has ever brought up her partner though the real identity of the father of her children is yet to be known.
Additionally, the exclusivity of her Instagram has also made it harder for the general audience to know about her family business, including her husband.

Wild Is The Mother Of Two Children; She Struggled With Breastfeeding

In May 2019, when Wild was still working for WUSA 9, the mother of two revealed how she struggled with motherhood during the rearing of her children.

She said while she deeply cherished the time she spent with her son, she hit a rough patch when he was about a month old. Wild added how the pressure to breastfeed weighed so heavily on her that she began to crumble.

The reason started as far back as the time when her daughter was born; she lost weight so quickly that Wild couldn’t nurse her effectively, said the former ABC 7 anchor. Whitney, therefore, admitted she always felt a little bit guilty about that.

With a predetermination to breastfeed her son, Wild said she was ever so ready. But when her son was about three weeks old, he started crying non-stop. The reporter-mom revealed she would hardly ever satisfy Phillip.

Between the stress and the sleep deprivation, Wild was losing her grip on emotions. She confessed she was on the verge of running out of all compassion for her only son.

The correspondent though realized breastfeeding had wedged itself between her and her child. Wild ultimately decided to stop. She then opted to formula despite the knowledge that the American Academy of Pediatrics says breastfeeding is paramount.

Whitney concluded she wasn’t advocating for women to stop breastfeeding, but she actually was rooting for parents to decide for themselves and take pride in whatever choice they make.

What Is Whitney Net Worth?

There might be still quite a time before Wild decides to go on discussing her financial gain/salary; even the roughest estimation. Whatever the case, the blonde reporter must sure be taking quite a sum for doing all those reporting and investigating. After all, being a news anchor has always been a lucrative career, especially if you’re in television representing one of the big media broadcasters.

While Whitney may not be among the A-listers who rake in the most money in the news industry, the numbers on her paychecks must very certainly rank her in the zone of excellent earners. However, there are estimates that Whitney has a net worth of around $1 million to $3 million as of 2021.