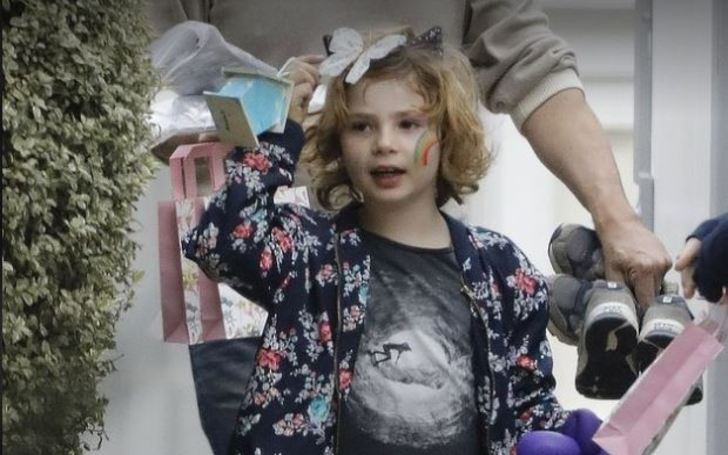 Anouk McGregor is the daughter of the Trainspotting actor, Ewan McGregor and his former wife, Eve Mavrakis. She is the fourth child and the youngest daughter of McGregor, an actor who in recent times, gained quite the media attention for his relationship with the Scott Pilgrim vs. the World actress, Mary Elizabeth Winstead.

Ewan McGregor is a father of five including Anouk. He was in a long relationship with the mother of his four daughters, Eve; from the mid-’90s to the late 2010s. She is a French-born production designer who has worked behind the projects of movies such as Lock, Stock, And Two Smoking Barrels.

There are a handful of questions regarding McGregor’s daughters – from the eldest to the youngest. While most of the girls have addressed those queries on their own, Anouk McGregor, given her young age, is still a perplexing subject. Especially when it comes to discussing her relationship with the Star Wars actor; if she is his biological daughter, what is her origin, and such. Decode all these in the writings below.

Anouk McGregor Parents Met During The Filming Of A Series

Anouk’s parents, McGregor and Eve met back in the 1990s when the Scottish actor was doing a minor role in the series Kavanagh QC. French-born Mavrakis, five years older than him, was the production designer in the same project.

In an interview with The Graham Norton Show, the Perth-born star said

“I knew right then that I really wanted to be with her,”

McGregor said he wanted to be with her in a different way to all the other many women he had been with up until that point.

Shortly after the marriage, the British-American actor and his former wife, Mavrakis welcomed their first child, a daughter, Clara in Feb 1996. She is also an actress and a model. During the birth of Anouk’s eldest sister, Clara, Ewan was 25.

Clara has a contract with Wilhelmina Models and has also posed for Fendi bags. The eldest child of the OBE star is a former student of the Tisch School of the Arts in New York.

Her Other Sister, Jamyan Was Adopted

After Clara, Anouk’s parents, McGregor and the designer, Eve, added another daughter to their brood, Jamyan. The Crieff native though adopted the Mongolian child in 2006 while filming a televised adventure series in Mongolia.

The now 50-year-old actor met the orphan when she was just two, as he made his way across Mongolia via motorcycle in 2002. She reportedly was born in June 2001. A bit different from Clara, Jamyan is building her career in academia. She studies at Mitchell College. It is a private liberal arts college in New London, Connecticut.

Anouk’s other older sister and Ewan’s second child (biological), daughter Esther was born in November 2001. She along with her sister, Clara worked on modeling campaigns, and appear frequently in each other’s Instagram posts.

Esther is also a tattoo artist, musician, photographer, and clothing designer (her line is called EnL Clothing). She currently studies at NYU and is set to graduate in 2024. Additionally, she is in a band called French Thyme with her friend Leo Major.

In 2019, Anouk’s sisters, Esther and Clara revealed they were both bisexual. They even boycotted Coachella after knowing about the music festival founder’s “anti-LGBT beliefs”.

She Also Has A Half-Brother

From her father’s relationship with the actress, Winstead, Anouk also has one younger half-brother. In June 2021, McGregor welcomed his fifth child and first-ever son, Laurie with the Final Destination 3 actress, Mary Elizabeth Winstead.

Anouk McGregor Was Adopted By Her Parents

After having three daughters, the Emmy winner and Mavrakis again adopted one more daughter. And this time she would be none other than Anouk. Unlike, Jamyan, McGregor hasn’t revealed the real origin of his fourth child.

In fact, the actor didn’t even plan to reveal about her; he had accidentally mentioned her during an interview with the New York Post in June of 2011 which allegedly was a couple of months after her birth.

Reports suggest that she was born in March, the same year.

Anouk was four months old when McGregor and Eve adopted her in 2011. Much like her sisters and mother, she is also fluent in French.

Despite their fame, McGregor and his former wife didn’t raise Anouk and her sisters in a celebrity surrounding. In Sep 2018, he explained to Men’s Health that he was against the idea of taking the kids to premieres or even buying them iPods.

On the other hand, he declared parents must spend time with their children.

Her Parents Separated After Staying Together For Over Two Decades

After 22 years of marriage, Ewan filed for divorce from Eve in January 2018. In October 2017, People reported the couple had ended their courtship and were actually living separately since May.

While speaking to The Sun in 2017, Mavrakis talking about her divorce from McGregor, said it was disappointing and upsetting but added her main concern was for her four children.

Mavrakis initially wanted sole custody of their daughters, but McGregor filed for joint custody. Their divorce concluded on August 13th, 2020.

Despite all the tensions arising in McGregor’s divorce and new relationship, he continued to be a caring father to his five children.

While McGregor and Eve’s first three daughters were quite grown up during the divorce, Anouk was still quite young. So in the proceedings, a US judge awarded the Doctor Sleep star and his ex-wife joint custody of the youngest of their four daughters, Anouk who was then nine.

The Reason Behind The Separation Of Anouk McGregor Parents

While neither, McGregor nor Eve has explained the reason as to why they split, the tabloids and some insiders blame actress, Mary Elizabeth Winstead.

As such amidst the news of the Moulin Rouge and the French art director’s separation, different media outlets were publishing photos of McGregor kissing his Fargo co-star, Winstead, at a cafe in London. The two allegedly started their relationship in the middle of 2017.

McGregor and Winstead had played lovers, Ray Stussy and Nikki Swango, in the FX’s series, Fargo.

Winstead, too, was in a marital relationship with the filmmaker, Riley Stearns. They split in the month of May, the same year, Anouk’s parents parted their ways.

In fact, sometime before it became a matter of discussion, the production designer mother of Anouk had herself gone public with her new relationship. Eve had shared a picture of herself with Jonathan on Instagram while enjoying a holiday in Italy.

When they were together, McGregor and Mavrakis liked to keep their family life private. As such in 2002 a paparazzi snapped and published the couple and their children’s pictures when they were enjoying their holiday somewhere in Europe.

McGregor shortly after sued the publication for disturbing his family’s privacy and ultimately won the case. The actor reportedly won close to $75,000 in damages over the legal dispute.

In Sep 2020, Anouk served as a camerawoman for the American late-night show host, Jimmy Fallon for one of his motorcycle stunts.

Anouk’s dad, McGregor was executing Jimmy Fallon’s ‘epic’ motorcycle stunt with Obi-Wan Kenobi figure. This was after Fallon’s team at The Tonight Show challenged the Obi-Wan Kenobi actor to leap over an Obi-Wan action figure on his motorcycle.

They initially thought he’d say no, but the Scottish actor said yes. McGregor later admitted he decided to accept the challenge despite the warnings of his representatives and lawyers.

And so when the Golden Globe-winning actor finally executed the challenge serving behind the camera was his adolescent daughter, Anouk McGregor. The father later praised Anouk for her “amazing camera work,” and said the film wouldn’t have been done without his youngest daughter.