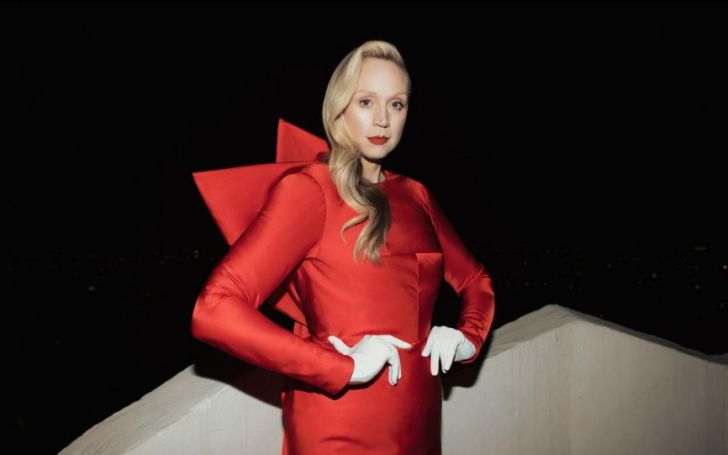 Gwendoline Christie is one of the most renowned actresses in Hollywood with numerous movie and TV credits. Most notably, Christie who is 6ft 3in tall in height played the role of Brienne of Tarth, a tall warrior in the HBO fantasy-drama series Game of Thrones. Her popularity further skyrocketed when the actress snagged the character of Larissa Weems in the cult-hit Netflix series Wednesday, directed by Tim Burton.

Along with her burgeoning acting career, is Gwendoline also equally successful when it comes to her dating life? Thousands of her fans are quite curious to know if Christie is married to her husband. If yes, know about her spouse and partner in the article below.

Is Gwendoline Christie Married to a Husband? Her Low-Key Love Life

Unlike her professional endeavors, the details about her love life have been kept notoriously private by the actress herself. Despite her tendency of keeping things private, people are still eager to know about the relationship status Christie possesses in 2023.

Especially, since Gwendoline has been in a couple of highly acclaimed TV series like GOT and Wednesday, there have been lots of queries about whether or not the 44 years old actress is married to a husband.

Well, the answer is NO! At present, Gwendoline isn’t married to anyone nor has talked about her husband so far. So, who is Christie dating in 2023? Let’s talk about her boyfriend and partner in the following headers.

Although Christie has yet to tie the knot with anyone, the Wednesday star has been in a blissful relationship with her partner Giles Deacon. Both of them are known figures in the entertainment industry.

While Gwendoline is into acting, her boyfriend Deacon has made quite a name for himself in the fashion world with rich, dramatic, and more cultural designs. Over the years, the famed British fashion designer and Creative Director has even designed for his partner too.

Not only that but Giles Deacon’s girlfriend of around one decade also highly praised her beau’s extraordinary designs. She once opted for a silk gown printed with bird eggs of the British Isles designed by Deacon. And later, the Hollywood star described her long-time partner as her favorite designer. She said of her bae via email to Telegraph,

“Giles has long been one of my favourite designers. He has two of my favourite attributes in artists: wild imagination and technical rigour. [His designs] can be practical, otherworldly, sculptural and mind-bending, but you always feel celebrated as a woman when you wear them… Their confidence somehow increases yours. It’s quite a power for a designer to have. His clothes have personalities.”

Christie and Her Boyfriend Deacon Were Friends Initially

Like many relationships, their feeling for each other also began with a friendship. It was first Gwendoline who revealed they were friends at first in an interview with Stylist in early 2013. When the interviewer asked her about how much the actress is active and expressive towards her fans on her social media, Christie responded by saying,

“I’ve taken a back step from social media. I don’t think it’s really healthy. I’d rather not know. And it’s completely self-indulgent.”

But, the Game Of Thrones star said She tweeted “yesterday” to the TV network QVC about an item from her friend Giles Deacon’s jewelry line.

In the same interview, Gwendoline further said that another fashion designer from London Henry Holland is also her best friend. She said of both of her pals,

“I’m very lucky that those people are my friends. I’m lucky because they’re all amazing people. They’re brilliantly talented and incredibly smart and working extraordinarily hard in a very, very difficult industry. Pretty much all my friends are creative.”

Christie’s Partner Deacon Was Head Over Heels For Her

As per some sources, the duo first came across in 2012. When they first met, it was love at first sight for the designer Giles Deacon. He was “instantly smitten” in love with her. He told Yahoo! News in 2018,

“I met Gwendoline six years ago through a mutual friend and was instantly smitten.”

“For a million different reasons, I thought she was extraordinary. The way she carries herself, it was not like anything I’d seen before.”

Since then, the veteran designer has also professionally worked with his partner several times. He once told Britain’s Grazia magazine that it is an “absolute joy to work with professionally, and we’ve dressed her for many occasions, most recently the Emmys.”

Deacon further said his long-time girlfriend also “has her very own innate sense of self and her knowledge of film and fashion in film wipes the floor with mine. It’s great to have that to play with.”

As said earlier, the movie and TV actress Christie has been quite confidential when it comes to her love life. Like her, her long-time partner Giles is also the same about their private life. So, the duo didn’t reveal anything about their growing romance initially. Though, they did make several joint appearances at the time.

But, later, we came to know Christie and her boyfriend Deacon are dating since New Year’s Eve in 2012. By that time, they already went on several dates including a foray into the Elle Style Awards. There, the lovebirds joined Deacon’s designer partners, Henry Holland and Jonathan Saunders.

They have since been in a blissful relationship.

Are Gwendoline and Deacon Married?

No, they are not married to date. Although the couple has been together since the early 2010s, neither the actress nor her fashion designer partner has talked about their wedding plan for the future.

So, it looks like it will be a while before we see them as husband and wife.

Her Role On Wednesday

In 2022, Gwendoline Christie started playing in the coming-of-age supernatural comedy horror series Wednesday. She played the role of Larissa Weems, the principal of Nevermore Academy in the series. And its other cast members include Riki Lindhome, Jenna Ortega, Emma Myers, Iman Marson, and more.

Facts about Lakiha Spicer And Her Relationship With Mike Tyson