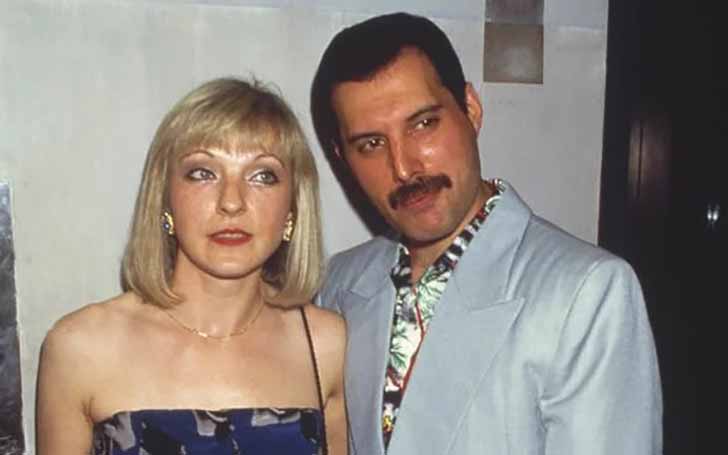 Mary Austin is famous as the ex-girlfriend of the late singer and musician Freddie Mercury. Even though Freddie was reportedly gay, he and Mary dated for years before they finally separated. We all know, despite their separation, Austin was by Mercury’s side at the time he died in 1991.

Mary Austin hasn’t made a frequent media appearance after Freddie’s passing. However, she has talked about her and Mercury’s relationships in a couple of interviews in the early 2000s. But, what is she doing nowadays? Where is Mary Austin?

In today’s article, we are talking in detail about Austin’s whereabouts. Besides, we’ll also discover her early life, parents, siblings, career, net worth, and more.

Mary was born Mary Georgina Austin on 5th March 1951. As for her precise birthday, there’s no official info, but one YouTube channel named Sabrina Mercury uploaded a video tributing Mary on her 70th birthday on March 5, 2021. Besides, many of Freddie and Mary’s fans have wished her on her special day in the comments. Here is the video.

When it comes to Mary’s parents, there isn’t much info about them, however, we know for sure that they were both deaf who communicated through sign language and lip-reading. Besides, Mary doesn’t have siblings.

As a matter of fact, Mary is British by nationality and belongs to the Caucasian White ethnicity.

She Started Working in The Early Teenage Days

Mary Austin was born and raised in a middle-class working family. Since her parents were deaf, she had to work hard to earn her living from her teenage days. As per IMDb, Austin’s father was a hand-trimmer for a wallpaper specialist while her mother worked as a maid.

The hardship her family had to go through led Austin to drop out of school at the tender age of 15. Austin started working as a receptionist and shortly after, she got a job at Biba, a fashionable London clothing store.

One day, she attended a concert at a nearby college where she had an encounter with Brian May who worked nearby. Brian was a musician and was about to start a band with his friends at the time. Austin and May hit it off and started dating, but they broke up soon.

We all know Many was the inspiration for Freddie Mercury who created several hit songs for his band, Queen. They were in a relationship for a long time, but how did their romance blossom? How did they meet for the first time? Let’s explore all about their romance in the below section.

Mary Austin and Freddie had the first encounter when the former was dating his friend and band-member, Brian May. Austin was unaware, but Freddie was infatuated by her, and he started frequently visiting the store she worked at. Mary and Freddie soon became friends.

Around six months later, Freddie surprisingly asked her out. She was hesitant at first, however, she later agreed to go on a date. Both Mary and Freddie were financially strapped at the time they started dating so they did things that didn’t involve money.

Dated for a While Before Moving in Together

Austin and Mercury first met in 1969 and started dating around six months later. The pair continued their romance for years before they finally moved in with him in 1973. Their financial position was still under average at the time they moved in together.

Gradually, Freddie’s band, Queen started getting some gigs and they moved into a larger apartment. Mary was a grounded person, Mercury, on the other hand, was an extrovert.

Due to these odd reasons, Mary decided to break up with Mercury, however, the late singer refused to let her go and convinced her that they were meant for each other. Reluctantly, Mary continued her relationship with Mercury.

Mary Austin and Freddie Mercury were together for over six years. The ex-pair even shared an apartment in London’s Kensington Market. But, she was completely unaware of Freddie’s biggest secret.

After spending more than six years together, Freddie revealed to Mary that he was bisexual and had been unfaithful with her for a long time. Austin reminisced the moment Mercury revealed his secret with her in a conversation with Daily Mail. “I’ll never forget that moment,” said Mary. She added,

“Being a bit naive, it had taken me a while to realize the truth. Afterward, he felt good about having finally told me he was bisexual. Although I do remember saying to him at the time, ‘No Freddie, I don’t think you are bisexual, I think you are gay.”

Following the revelation, Mary Austin and Mercury ended their physical relationship and she moved to a nearby apartment purchased by hr ex-boyfriend’s music-publishing company. Despite their separation, Austin remained part of the band’s extended circle.

Mary Austin Remained By Mercury’s Side Until His Death

Following their breakup, Mercury got into a life of lavish excess fueled by substance abuse and random sexual relationships. On the other hand, Austin got busy with her own life. However, she was never absent for too long from Mercury’s life. She later started working for his management company and worked until his death.

She Inherited More than Half of Freddie Mercury’s Fortune – What is Her Current Net Worth?

According to Express.co.uk, Mary Austin, who was a long-time friend and ex-girlfriend of Freddie Mercury inherited more than half of his total net worth. The outlet reported Mary received a 50 percent stake in most of the earnings from his recording royalties.

Besides, Freddie’s parents and sister shared the remaining amount. But, after Mercury’s parents’ demise, Mary is believed to have got up to 75 percent of his total fortune. This Is Money estimated Mercury’s net worth as £50 million 20 years after his death. Meaning, Austin got £25 million as estimated in 2010.

Besides, Express also reported that Mary Austin received a big chunk of money from the movie Bohemian Rhapsody where she was portrayed by Lucy Boynton. She reportedly received £40 million from the movie while the surviving members of Queen received £63 million each.

Mary Austin Marriage and Husbands – Is a Mother of Two

After her split from Freddie Mercury, Mary Austin remained out of the media radar for years and didn’t date any other man either. Years later, she started dating painter Piers Cameron and got married to him in 1990.

When it comes to her marriage to Cameron, sites like IMDb have mentioned the pair got married in 1990, however, some sites, including Biography.com have reported Mary Austin was never married to Cameron.

Nevertheless, Mary and Piers gave birth to two children. Mary’s two children are Richard Cameron and Jamie Cameron. Jamie was born after Mercury’s death while the late music artist was godfather to her first son, Richard.

After her separation from Cameron in the early ’90s, Mary remained single for a long time before she met Nicholas Holford. The pair, however, ended their marriage four years after their marriage in 2002.

Where is Mary Austin Currently?

Mary was devastated after Freddie’s death but after some time, she got on with her life and got married to her second husband. Nevertheless, Austin never got away from Freddie’s memories. She also started a foundation in Mercury’s memory and also supports Queen’s musical efforts.

As mentioned before, Mary Austin received much of Freddie’s properties. She started living in Mercury’s London mansion following his death and she continues to live there until now. Like before, she doesn’t make her media appearances frequently, however, she grants interviews occasionally.