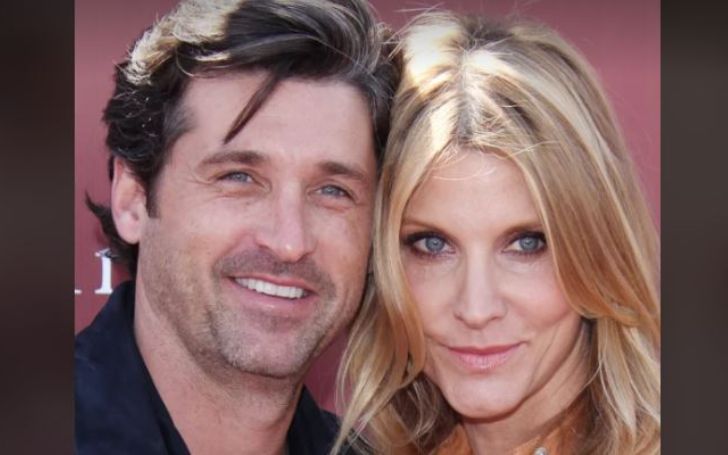 Jillian Fink is one of the most preferred makeup artists and hairstylists in Hollywood. She though is more known as the wife of Grey’s Anatomy and Enchanted actor, Patrick Dempsey.

As a stylist, she has worked for some successful Hollywood celebrities which also include A-listers like Kristen Stewart, Bradley Cooper, Kate Winslet, and many others. Further, Fink is also an owner of her own beauty line; because of which she has turned into a successful businesswoman.

Talking of her relationship with Patrick, they have been together since the mid-late ’90s. While the couple experienced a few or two rifts in the late 2010s, they now look more together than ever. Well, learn more about her in the headings below.

Jillian Fink Is A Native Of Texas

While not much about her early life is known, she though is presumably a native of Texas who though grew up mostly in Los Angeles.

Fink also has at least one sister, Kristin Fink Mason. The now 56 or 57 years old Jillian Fink or Jillian Dempsey was born around the year 1966 in February.

The entrepreneur Jillian and the Brother Bear 2 actor Dempsey met at the former’s hair salon where she was working at the time. Fink in 2002 told People it was surprising for her to see Patrick at her workplace but admits she was happy as he was cute.

The actor/racer then would visit Fink’s salon for the next three years. Allegedly in all those years, Fink was somebody else’s partner and once she broke up with her ex, Patrick asked her out.

They moved in together just three months after their first date. The couple eventually married in late July 1999 at Patrick’s family farmhouse in Lewiston, Maine.

Jillian And Her Husband, Patrick Have A Daughter And Twin Sons

After the wedding, Jillian along with her spouse became parents to three children, Talula Fyfe Dempsey in Feb 2002, and a set of twin boys, Darby Galen Dempsey and Sullivan Patrick Dempsey in 2007.

Fink and Dempsey, daughter, who is now 20 years old is a clinical psychology student at George Washington University.

Jillian Fink And Patrick Dempsey Decided To Divorce In Early 2015

On the 16th year of their marriage, Fink would file for a divorce from Dempsey in Jan 2015. The blonde aesthetician at the time cited irreconcilable differences for the cause.

She and her husband even issued a statement where they said they were going to end their marriage after careful consideration and mutual respect.

Are Fink And Patrick Still Married?

Yes, Fink and Patrick are still together and married for good. The couple reconciled within a year of the divorce filings. In May 2016, the ex-24 Hours Of Le Manns participant confirmed he and the mother of his children have indeed decided to get back together.

Dempsey while talking to People that month on why he and Fink decided to reunite, told,

Our marriage was not something I was prepared to let go of. I didn’t feel like we had done all the work. And we both wanted to do that work.

Fink’s husband added how neither he nor his wife was ready to give up on their marriage.

The couple apparently also wanted to be role models for their children and wanted to give them the message that people can work on differences.

Dempsey in Sep 2016 said counseling helped a lot in saving his marriage with the Texan makeup artist. The actor also took a break from car racing to give more time to his wife and children.

Fink and Dempsey’s marriage allegedly began crumbling due to the latter constantly working for years during his time on Grey’s Anatomy. A source once said as soon as the Flypaper actor left the ABC medical drama, Dempsey was able to focus more on his marriage and children.

Before, the beautician, Fink, Patrick was husband to Rochelle Rocky Parker. They had met when both of them were cast in a touring production of the Neil Simon play Brighton Beach Memoirs.

Rocky later revealed during their marriage, that Patrick used to beat her up and in one case the Maine-born actor assaulted her to an extent that she went on to suffer lifelong arthritis on her hand. Parker, however, later took back the allegations of domestic violence. Patrick’s ex-wife, Rochelle died of lung and throat cancer in 2014.

Dempsey’s wife, Jillian began working at salons as early as age 14. She at the time also used to sell private-label lash conditioning oil to her classmates at school in Los Angeles. Fink started off her journey as a beautician first starting out with crayons and drawing little pictures of dolls.

In an interview, she said everyone wanted her to cut their hair and do their makeup. Upon graduating high school, Fink enrolled at college but allegedly quit and instead attended the Charles Ross School of Hair Design in West Hollywood.

While attending Charles Ross, Fink had to choose between hair and makeup. She ultimately chose the latter.

Fink eventually earned her degree from Charles Ross after which she spent some time at Shu Uemura and also worked on videos for Duran Duran. Meanwhile, her makeup artistry talent also landed her in the big leagues during which she worked with photographers like Mario Testino and Julian Broad.

Jillian also went to Paris where she met the Resident actress Milla Jovovich who helped her land some jobs in Europe as well.

Fink after a while moved to Los Angeles and signed with Smashbox Studios. Not long after in 1993, she would get her big break after being the one to do makeup for the Blue Lagoon actress Brooke Shields for her double-page spread in Vanity Fair.

Then in 1999, Fink did Johny Depp for his cover shoot and then Drew Barrymore for her Vanity Fair shoot. With Barrymore, Jillian traveled and worked all around the world for seven to eight years. In the meantime, she also launched Delux beauty parlor with her sister.

Later, Fink and her sister’s salon, Delux would become a makeup brand and the sister duo would further on go on to collaborate with Avon, a British multinational cosmetics. And in 2006, Jill became Avon’s first global creative color director after which she launched a new line of cosmetics in Spring 2007.

Talula’s mother’s first products included eyeliner and a line of lid tints in five colors. Fink followed these with cheek tint and after that brought a washable mini fan brush.

Ever since her start as a businesswoman, Fink has been regularly debuting new products in the line. Jillian, in 2015, launched Khol Eye Liners. The mother of three then would respectively launch Lid Tints a year later, then Cheek Tints, and the Gold Sculpting Bar in late 2018. And in March 2020 Fink launched her own virtual beauty and grooming app after the name of her daughter, Fyfe.

One of her well-known products is the 24-karat Gold Bar, a $195 gizmo that uses a battery to massage and contour the face.

Second of all, Dempsey’s partner is also the creator of the Roadiee Hair Pomade. Fink also sculpts in her spare time and makes rose gold jewelry as well; in fact, the Pretty Woman actress, Julia Roberts has also worn her pieces, as had Kristen Stewart.

What Is Jillian Fink’s Net Worth?

Although Patrick’s wife has long established her repute as a beauty products entrepreneur, what and how much she has achieved in terms of wealth is yet to be taken into consideration. Addedly, despite all her interviews and recognition in the media, she is due to address or even tease a bit about her net worth and likewise facets.

Nonetheless, ignoring the obscurity, it is more than presumptive that Fink is a seven-figure woman considering her growingly successful cosmetic lines.

On the other hand, though, her actor husband, Patrick is a well-known multimillionaire actor; the Grey’s Anatomy alum’s estimated fortune sits somewhere in the vicinage of $80 to $90 million. In fact, during his time in Grey’s Anatomy, Fink’s husband was allegedly raking in almost half a million dollars per episode. He appeared in the project along with Kerri Higuchi, Justin Chambers, Ellen Pompeo, and more.