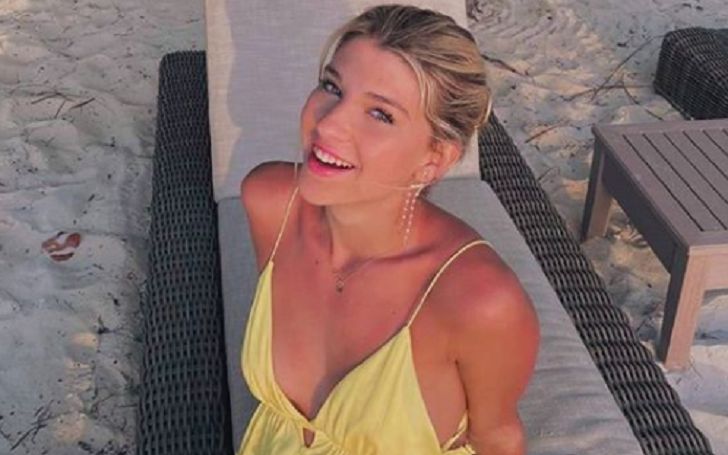 Phoebe Adele Gates is one of the popular star kids who has been in the limelight since her birth due to her father Bill Gates‘ immense success. Being the daughter of one of the world’s richest men, Phoebe obviously had an affluent childhood. But, there were also some strict rules made by Gates for his children.

Aside from all the exposure that comes with being the daughter of the richest man, Phoebe has an identity as a highly educated person with a degree from Stanford University.

Moreover, her love life and queries about who is Phoebe Adele Gates’ boyfriend are some other things that are attracting attention. In today’s article, we will explore her life thoroughly including her education, net worth, and many other unheard facts.

The beautiful Phoebe was born on 14th September 2002, in Seattle, Washington. Phoebe’s mother Melinda Gates is one of the active philanthropists around the world. She and her husband Bill founded the Bill & Melinda Gates Foundation in 2000.

Melinda previously worked as a general manager at Microsoft. She attended Ursuline Academy of Dallas and graduated from the college in 1982. She then enrolled at Duke University and earned her bachelor’s degree in computer science and economics.

Talking about her grandparents, Adele is the granddaughter of William H. Gates Sr., an attorney, and Mary Maxwell Gates, a businesswoman. Her maternal grandparents were Raymond Joseph French Jr., an Aerospace engineer, and Elaine Agnes Amerland.

Besides, Bill Gates’ daughter Phoebe is an American as per her nationality and belongs to a mixed ethnical background. Her dad is of English, German, and Irish/Scots-Irish ancestry.

Phoebe grew up in one of the wealthiest families in the world with her two older siblings; a brother Rory John Gates, born on 23rd March 1999, and a sister, Jennifer Katharine Gates, born on 26th April 1996.

The Gates siblings are pretty close to each other. They frequently visit several places around the world. Phoebe and Jennifer were spotted celebrating the 2019 Christmas in Cabo with their mother. Both Gates sisters have posted the photo from their trip on their Instagram.

You will definitely like: Erin Siena Jobs-The Exclusive Details on Steve Jobs’ Daughter

Jennifer, an accomplished equestrian got engaged to Nayel Nassar in early 2020. Her fiance is also an equestrian. She announced the big news via her Insta on 29th Jan.

Adele attended Lakeside School, a private day school in Seattle, Washington. Her father and siblings also graduated from the same school. Phoebe now studies at Stanford University and is set to graduate from the college in 2025. Her sista Jennifer also attended Stanford.

Bill Gates said in a 2005 school speech, “Lakeside was one of the best things that ever happened to me.” He also announced a tremendous $40 million donation to the school at the time.

Besides, Phoebe is a trained ballet at the American Ballet Theatre School. She attended Lincoln Center for the Performing Arts in New York City too.

What Does Phoebe Adele Gates Do?

Phoebe seems more focused on her academic career at present rather than involving in anything else. Besides, Wonderslist included her in its “World’s Ten Most Powerful Kid” list.

Where Does Adele Live?

Phoebe Gates currently resides in her father Bill Gates’s large mansion located in Medina, Washington. The 66,000-square-foot house was valued at $147.5 million in 2009. The sprawling property boasts a 60-foot swimming pool, a 2,500-square-foot gym, and a 1,000-square-foot dining room.

Phoebe Adele Gates Net Worth in 2022

As of 2022, Bill Gates’ daughter Phoebe Adele Gates has an estimated net worth of $20 million. Similarly, her siblings’ fortune also stands in the same neighborhood.

On the other hand, her dad Bill Gates has $118.7 billion in net worth as of October 2020. The Silicon Valley superstar and tech titan Gates is also the greatest philanthropist in the world. In 2007, he donated more than $28 billion to several major charity causes along with his wife.

The most powerful couple later decided to give 95% of their large fortune to charity. Besides, Phoebe is also a member of the American Library Association. It is a nonprofit organization that helps to promote library education throughout the world.

Despite being the children of one of the greatest technological innovators, they were bounded by some family rules. Gates’ kids didn’t have their own cell phones until the age of 14. Furthermore, when they started using phones, they were never allowed to bring the phone to their bed and were banned to use it at the dinner table.

Gates told the Mirror in 2017, “We don’t have cell phones at the table when we are having a meal, we didn’t give our kids cell phones until they were 14 and they complained other kids got them earlier.”

Who is Phoebe Adele Gates Boyfriend?

Phoebe has been in a beautiful relationship with her boyfriend Chaz Flynn for over a couple of years. Although the couple has never revealed when exactly they began dating, looking at Phoebe’s Instagram posts it is clear they are together since mid-2019.

In August 2019, the power couple was seen enjoying a boat ride in Hood Canal along with a couple of their friends. She often shares pictures with her beau on various occasions. She posted a photo of herself with her bae celebrating his birthday on 8th July 2020. Phoebe wrote in the caption, “happy birthday my love.”

It looks like the duo is in a happy relationship.

Besides, her partner Chaz now studies at the University of San Diego and will complete his graduation in 2025.

Other Interesting Facts of Phoebe Gates