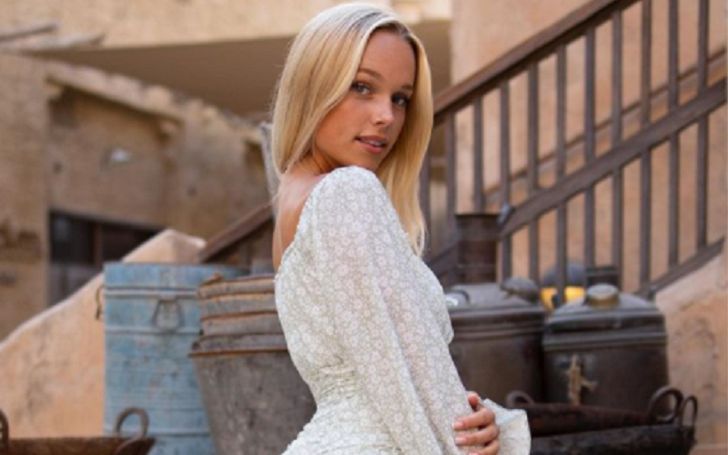 Estelle Berglin is a budding social media star and content creator from Sweden. She has already had a decent fan following on her Instagram with over 760k followers as of 2022. Similarly, with a strong online presence, the gorgeous influencer has also amassed considerable followings on her YouTube channel. She has two channels, Swealife in English and another self-titled in Swedish.

But, most of all, Berglin started getting more attention after the Instagrammer began dating her boyfriend Julius Dein, a street magician illusionist. Let’s find out are Julius Dein and Estelle still together?

Here in this article, we will also talk about Estelle’s family background and college life!

How Old is Estelle Berglin? She Is From Umea

Estelle’s age is 24. She was born on 26th April 1997, in Umea, a city in eastern Sweden. She spent a major part of her childhood with her family in her hometown of Umea.

Talking about her nationality, Estelle is Swedish and is of Caucasian ethnicity.

Her Father is a Marketing Manager at Dignita AB

Estelle is the daughter of Joakim Berglin. He currently serves as a marketing and sales manager at the company Dignita AB. He has been part of the office since 2010.

Prior to Dignita AB, Estelle’s father Berglin also worked for a number of organizations such as Kommuninfo AB as a marketing manager and TDC Försäljning AB as a sales director.

However, the detail of her mother still remains out of the media.

Estelle Has One Sibling

The social media star has a younger brother, William Berglin who completed graduation in June 2020. She shared a series of photos from her brother’s convocation.

Besides, William has also appeared on several of his sister’s YouTube videos.

Her College: Is a Dragonskolan Graduate

In addition, back then, Berglin spent a few years in Phuket, Thailand. She there took a bartending course.

Berglin began a career on social media platforms following her high school. She has amassed over 760k followers on her Insta. She has been endorsed by a number of big brands and often shares sponsored semi-clothes pictures on her Instagram profile.

Furthermore, Estelle has good fan followings on her YouTube channels that operate under two different languages, self-titled one in Swedish and another Swealife in English. She has more than 21.7k subscribers on eponymous and 154k subscribers on Swealife in 2022. She predominantly talks about beauty, fashion, health, and fitness on her social media handles.

Additionally, Berglin is also a fitness trainer who runs her own fitness Instagram account under the name Sweafit. So far, she has 117k followers on her account.

Besides, her social media followers further skyrocketed when Estelle appeared in one of her boyfriend Julius Dein’s films, where the Instagrammer did a water glass stunt.

How Long Have Estelle Berglin and Her Beu Julius Dein Been Dating?

The lovebirds have been together since late August 2019. Commemorating one year anniversary, Estelle Berglin’s boyfriend shared a romantic photo of the couple with a beautiful caption on Facebook on 26th August 2020. He wrote,

“Happy 1 year anniversary to my gorgeoussss diamond amazing girlfriend Estelle Berglin who stole my heart at my Sweden show last yea Congratulations for tolerating me for an entire year. You deserve a BIG medal  ( all my friends will agree). Thanks for being my biggest supporter, my rock, my role model, and for making me a better person.”

The magician ended the caption by saying “I ❤️ you.” Here is the photo.

Estelle and Julius kept their romance out of the media before they made an appearance together in a Porsche to Joshua Kane in early November 2019, in London.

Since then, the long-time couple has shared numerous photos of themselves on their social media handles. Back in Feb 2020, the duo was on vacation in Mexico. At the time, Dein shared a few magic videos with his girlfriend Berglin. Nevertheless, the two had to live in Mexico longer than they planned when the coronavirus broke out throughout the world.

Are Estelle Berglin and Julius Dein Still Together in 2022?

For the past several months, the duo hasn’t made a single public appearance, nor they have shared their photos. Therefore, many of their fans are curious to know whether the two are still dating or it’s over. Honestly, we are still doing our best to find the exact answer to the question.

Meanwhile, many online tabloids suggest the duo are still together and leading a happy relationship, keeping it a little bit private.

Estelle Berglin Boyfriend is a Magician

Like his girlfriend Estelle, Julius has a mega-fan following on his social media platforms. He has over seven million Instagram followers and nearly one million subscribers on his self-titled YouTube channel.

As a magician, Dein has appeared in many radio and TV programs that include Talk Sport London, Steve Harvey Show, and more.

Although Estelle is yet to talk about her past relationship, looking at her previous social media posts, it seems like the content creator had been in a few romantic relationships in the past. Back in Feb 2014, Berglin posted a photo of an unknown guy with the caption,

Later in years, the social media sensation appeared in a secret outing with a few other men in various exotic destinations, including Nativity Cathedral, Riga, Alexander Nevsky Cathedral, Tallinn, and more.

What is Estelle Berglin Net Worth?

Estelle has an estimated net worth of $1 million. She has mainly earned such a good amount of money from her social media career. With thousands of followers on Instagram, Estelle commands a considerable fortune from her sponsored posts.

Similarly, her promotional video on her own YouTube channel plays a major role to boost her net worth. According to sources, Berglin makes over $12,000 a year from YouTube.

Body Measurement: What is Her Height?