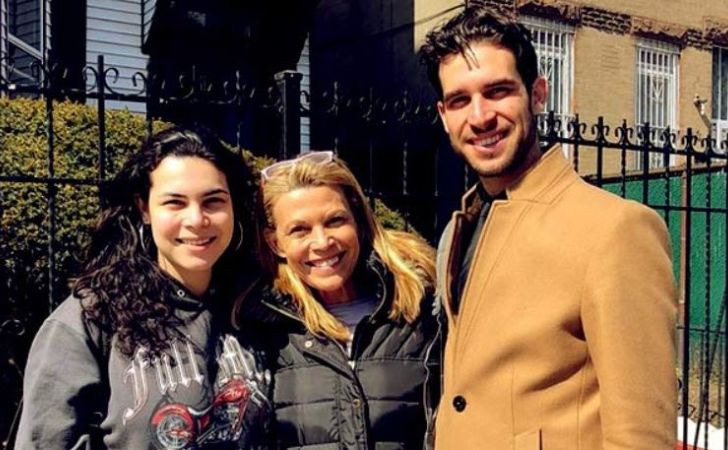 Do you know American TV personality, Vanna White? She gained a huge recognition for her work in the TV game show Wheel of Fortune. She gathered so much fame that her children have been treated like a celebrity over the years. Well, in today’s action, we are going to talk about her youngest daughter Gigi Santo Pietro.

Well, in case you didn’t know, Gigi is an actress just like her mother. However, she has only appeared in a few TV series so far. In this article, we have brought to you some untold facts about her career, family, boyfriend, marriage, and much more.

Gigi Santo Pietro Is The Youngest Daughter of Vanna White

A celebrity daughter Gigi Santo Pietro was born on July 1, 1997, in the United States, to father George Santo Pietro and mother Vanna White. She is 25 years old in 2022 and is the youngest child of the couple.

Pietro grew up with both her parents until they divorced in 2002. But since the split, she has been primarily living with her mother and shares certain times with her father as well.

Talking about her education, she is a graduate of NTU’s prestigious Tisch School of the Arts, from 2015 to 2019. Later, she joined NYC school, where she studied photography and imaging, pursuing her passion for photography.

Well, she stands 5 feet 5 inches tall and weighs around 58 kg.

Gigi has two older siblings, Nikko Santo Pietro, and a half-brother Andrea Santo Pietro, who was born from her father’s previous relationship. While Nikko was born on June 10, 1994, and is 27, Andrea was born in 1982 and is 39 years of age.

She has never made a public appearance with half-brother Andre but is very close to her biological brother Nikko. In fact, they love spending time with him. Back in 2018, she even spent a whole day on New Year Eve with her brother and other family members.

Well, Gigi Pietro’s mother didn’t miss sharing a photo from the beautiful day. In the caption, she wrote,

Happy New Year from our family to yours! #202o.

Gigi Santo Pietro is An Actress Like Her Mother

Like any star kid, Gigi seems to be pretty much influenced by her mum Vanna. Like her mother, she is also into acting but has unfortunately appeared in very few TV series.

She made her first TV appearance back in 2010, in Wheel of Fortune. Later, in 2020, she made an appearance in an episode of CBS News Sunday Morning.

Talking of her mother Vanna White, she has appeared in dozens of movies and TV series. She made her acting debut with the TV movie Midnight Offerings back in 1981. The same year, she was part of two other projects Graduation Day, Looker, where she played a character named Doris, & Reston Girl respectively.

Some of her other acting gigs include Double Dragon, Style & Substance, The King of Queens, and many others. Besides acting, she has also hosted numerous TV series and is primarily known for Wheel of Fortune, which she has been hosting since 1983. Some of her other works as a host are Entertainment Tonight, CBS News Sunday Morning, and Good Morning America.

She Is Also A Tattoo Artist

Along with being an aspiring actress, Gigi is also a tattoo artist. In fact, she was interested in artistic works since her childhood days and used to spend time creating art.

Moreover, her Instagram account also states her an apprentice at Transition Tattoo Studio, which is situated in Huntington Beach, California. Moreover, on her Insta, there are numerous photos of her tattoo designs created by her.

Her Father Is a Restaurant Owner

Apart from restaurants, he is also into real estate and is successful in both fields. Not only this, but he has also had his hands in movies and TV. He has appeared in TV series like Good Morning America, Brooklyn South, Star Trek: Voyager, and numerous others.

Gigi’s Parents Divorced When She Was Young

Needless to mention, but Gigi Santo’s parents were one of the most talked-about couples in the past. But despite the popularity and love, they shared as a real-life duo, their marriage didn’t last forever.

They married in December 1990, which they had announced days earlier in a ski resort. The former couple received their marriage license from the Pitkin County Courthouse.

But despite everything, their relationship was not meant to last and after almost 12 years into marriage, they divorced. Unfortunately, they have not revealed the exact reason behind their divorce.

Following their divorce, Vanna began dating a businessman named Michael Kaye. But this time as well, their relationship didn’t last. Well, since, 2012, she is reportedly dating a guy named John Donaldson, who is a contractor. The couple seems to be pretty much into one another and is together for years now.

On the other hand, George has kept his love life away from the limelight. Though there are rumors that he married Melissa Mascari in 2005, that’s untrue.

Who Is Gigi Santo Pietro Boyfriend?

As a star kid, a lot of her fans expect her to be dating, but the fact is Gigi Santo Pietro is single and does not have any boyfriend at present. As a creative individual, she seems to be more focused on her works, primarily photography.

That said, she is good friends with a few guy friends, which also includes a guy named Jack Owen. That said, we hope, she finds a perfect man for herself.

Is Gigi on Social Media?

She does not seem to be a big fan of social media but she is active on Instagram, @gigisantopietro. However, she mostly posts about her works, which primarily are designs of tattoos and photographs she shoots. She also rarely gives insight into her personal life via her Instagram posts.

Gigi Santo Pietro is one who is very passionate about traveling. As a person who also loves photography, she is often looking for opportunities to travel across the world.

In fact, she has already visited major cities in the USA and Europe. Her favorite include places include Miami and Paris.

Well, she is an occasional drinker.

No, she does not smoke.

Has She Cheated on Her Partner?

She is apparently a loyal person and has not cheated on her partner.