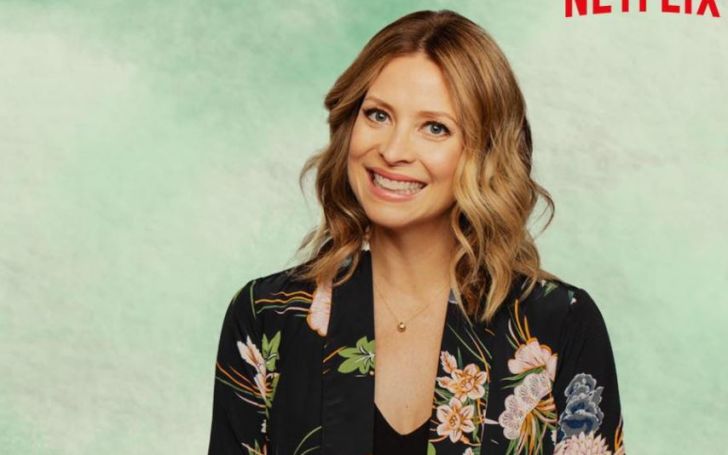 Jolie Jenkins is an American actress famous for her work in The X-Files. Although Jolie is also famous as Tony Robbins’ stepdaughter, she has made a name for herself by her own merit.

Her mother Becky Robbins was once married to Tony. It was after their marriage that Tony decided to adopt Jolie along with two of her siblings. As of now, the family lives separate lives and seems like they don’t have any association with Tony.

Today we’re going to take a closer look at the life of Jolie Jenkins and find out what she is up to nowadays. In addition, we will lay out some other interesting facts as well.

Jolie Jenkins Early Life: Who Is Her Father?

She was born on March 7th, 1974, in Denver, Colorado. She is the second oldest child of Becky Robbins, Tony Robbins’ ex-wife.

Jolie spent the major portion of her childhood in Colorado and moved to Los Angeles sometime after her mom married her step-dad, Tony. Many of you might be curious to know who her biological father is. Well, the answer to this question is one of the best-kept secrets.

Besides, she belongs to the Caucasian ethnicity and has American nationality. From her mom’s side, she comes from English ancestry.

It was back in 1983 when Becky and Tony first met. Becky attended one of Tony’s seminars in Denver, Colorado and this is where Tony fell in love with his blue-eyed blonde. The pair dated for a year and exchanged vows in 1984. After their marriage, the pair moved to Los Angeles, California.

During the initial phase of their relationship, it was going smoothly. Tony was doing fantastic in his career and the love and support of his wife helped him accomplish many things. Moreover, one of his most successful books, Awaken the Giant Within is dedicated to his then-wife.

However, their relationship didn’t survive the test of time and it ended before reaching the two-decade landmark. The couple separated in 1999 and their divorce was finalized in 2001.

As of now, Jolie’s mother Becky isn’t married to anyone, though her father tied the knot with his second wife, Sage Robbins.

Now talking about the father of the three of them, well, it’s quite complicated. You see prior to marrying Tony, Becky had been married two times before. Given that not much is known about Becky’s ex-husbands, we cannot say for sure whether the three of her children are from the same relationship or not.

Whatever the case may be, all three of the Jenkins siblings are incredibly close with each other. She has shared a couple of pictures with her brothers on her social media account.

At the time when her mom exchanged vows with Tony, Jolie was around 10 years old. Up until then, she studied in Colorado before the family moved to Los Angeles.

After finishing up her middle school, Jolie graduated from Torrey Pines High School in San Diego, California. Subsequently, she joined Occidental College, The Liberal Arts College in Los Angeles. For her bachelor’s degree, she majored in theatre.

We can say from the beginning, Jenkins was quite interested in the acting field. Thankfully, her major in theatre helped her become an established actress.

Jolie Jenkins is famous for her work in The X-Files

It was back in the ’90s when Jolie made her debut in the entertainment industry. She played the role of Nadia in one of the episodes of the series, USA High. After that, she starred in a string of TV series including Two of a Kind, Party of Five, Shasta McNasty, and The West Wing.

She, however, made her name known in the industry after she played the role of FBI Agent, Leyla Harrison. She played in the hit TV series from 2001 to 2002. Her other prominent works include Xyber 9: New Dawn, Desperate Housewives.

In 2018, she appeared in the Netflix series, Alexa & Katie. In the series, she played the role of Katie’s mother, Jennifer.

Jolie Jenkins is happily married: Who is her husband?

It was on October 27th, 2001 when Jolie took the biggest and probably the best decision of her life. She married the love of her life, David Pagani. Before marrying, the couple had been dating for a couple of years.

The pair is now married for two decades and they are still going strong. Jolie shares a lot of pictures with her husband on Instagram. The pictures alone tell us that they are totally head over heels for one another.

Her husband David is an illustrator/designer living in the US. He has worked with several big companies including Fox News, and many other magazines. He primarily shares his work on his work Instagram account, @dmpags.studio.

How many children does Jolie have?

She is a happy mother of two beautiful boys. She welcomed her older son, Louis Rocket Pagani on 31st December 2015. At the time of his birth, he weighed 8lbs 14oz and 22 cm long. Jolie shared the big news to her thousands of fans through her Instagram account.

A couple of years after becoming a mother, she welcomed yet another baby boy on 9th October 2018. She named her secondborn, Hugo Pagani. He was 9lbs, 1oz at the time of his birth.

Jolie is enjoying motherhood right now. Although it’s pretty hectic to take care of one child in the house let alone two, she still manages through it all like it’s nothing.

How much is Jolie Jenkins’ net worth?

She might not be one of the coveted actors in the industry, but that doesn’t mean she doesn’t get paid the big bucks. In fact, from her long-term career, Jolie has accumulated a great net worth of $500,000.

Meanwhile, her step-father Tony is worth a staggering $600 million.