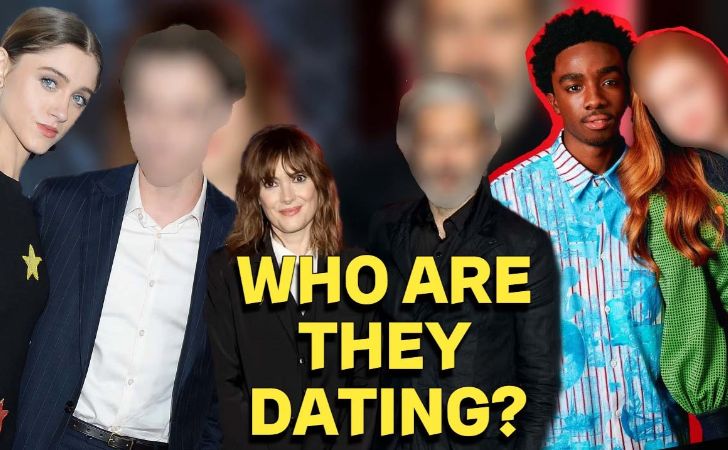 Stranger Things have been dominating the screen ever since its debut and now that the fourth season of the show has officially aired, there are a lot of unanswered questions regarding the cast of the show, one of which is who are the Stranger Things casts dating in real life.

While there are a lot of relationships depicted in the show, we all really wanted to know who the star cast dates in real life so without any further ado, let us get right into it.

Back in the ‘90s, Ryder was one of the most sought-after actresses, not just by movie producers but by other actors as well. Rightfully so, around the time, Winona was in relationships with big names in the entertainment industry like Johnny Depp, Dave c, and Matt Damon.

Coming back to the present day, she is currently in a relationship with Scott Mackinlay Hahn. The lovebirds have been dating since 2011. Her boyfriend is a renowned fashion designer. He is a sustainable fashion entrepreneur who co-founded the company, Loomstate.

One of the main protagonists of the show, Caleb really entertained us with his impeccable performance as Lucas Sinclair. It wouldn’t be an understatement to say that the handsome youngster is really famous amongst the ladies.

This is why there has been a lot of curiosity surrounding his relationship status. Talking on the matter, well, it looks like Caleb is in a relationship with himself right now. Yes, you heard that right, the Carme Hamlet native is single. It seems he is either more focused on his career or he has not found the right person yet.

We’re sure the name sounds familiar and if not the name then the surname, Hawke might help you out. Yes, she is the daughter of Ethan Hawke and his former wife, Uma Thurman.

Though Maya is relatively a newcomer in comparison to all the people on the list, she has already made a mark amongst the series’ fanatics. Now talking about her relationship status, she is currently in a relationship with musician, Spencer Barnett.

Off all the people on this list, Natalie is probably the only one who is dating the same person she is dating in the show as well. Yes, you guessed it right, she is currently in a relationship with Charlie Heaton, who plays the role of Jonathan Byers, Natalie’s character Nancy Wheeler’s boyfriend.

They started dating after meeting for the first time on the set of Stranger Things and have been able to keep their relationship private. In an interview with Refinery29, Dyer talked about working alongside her boyfriend and said,

“It’s an interesting thing to work with someone who you go home with. It’s always really fun.”

Sadie Sink plays the beloved character of Max Mayfield and cemented her position as a great upcoming actress. She has incredible on-screen chemistry with her co-star, Caleb McLaughlin which created a lot of rumors about their romance off-screen as well.

Talking about who Sadie is really dating, well, it is still behind closed doors. That being said, some time ago a paparazzi photo of Sadie along with Patrick Alwyn made a lot of headlines. Yes, Patrick is the younger brother of Joe Alwyn, Taylor Swift’s boyfriend. What’s more interesting is that Sadie appeared as the young fictionalized version of Taylor Swift in the music video, ‘All Too Well.’ What a small world, we live in, isn’t it!

Finn, who played the role of Mike Wheeler in the series, is a Canada-born actor. We’re sure this devilishly cute guy has been on the radar of many girls ever since he appeared in the Netflix show. Unfortunately, unlike many of his co-stars, who are kind of open about their relationship, Finn is extremely vigilant about his dating life.

That being said, since 2021, he has been rumored to be dating actress, Elsie Richter. Rumors about their relationship started when Elise shared a blurry picture of the two. Although both of them are yet to officially comment on their relationship.

Just like how she is dating her best friend in the series, Millie is currently dating her real-life best friend, Jake Bongiovi. If the surname sounds familiar, well, yes, he is the son of the singer, Jon

Bon Jovi. The lovebirds first announced their affair through an Instagram post in 2021. Since then, the pair has been relatively open about their relationship and often attends red carpet events together. Jacob attended the premiere of Stranger Things season 4 and supported his girlfriend.

In the early stages of the show, fans really wanted Will Byer to date Jane Hopper, played by Millie. But regardless, the pair remained close friends and to this date, Noah is not reported to be dating anyone.

Well, that is all we have here for you today. Make sure to like the video as it helps the channel a lot and don’t forget to subscribe to our channel.