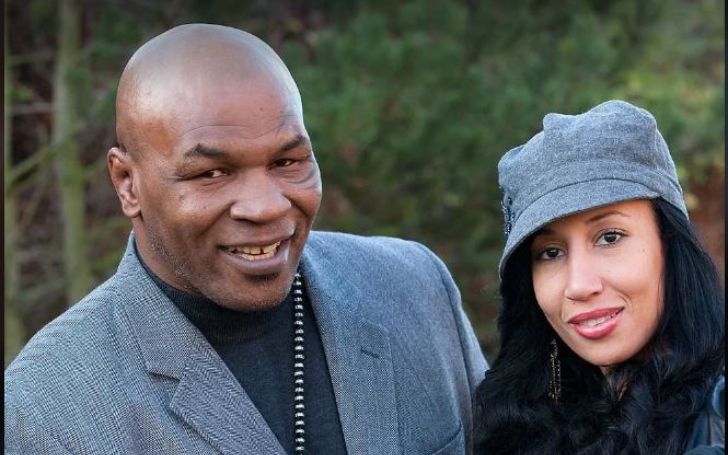 Lakiha Spicer has been the wife of the boxing icon, Mike Tyson since 2009. The former world heavyweight champion and Spicer are also parents to two children. The veteran boxer Mike Tyson’s life is always worth a discussion, at least one or two aspects of it. The controversies make one long list that comprises his in-ring and off-the-ring stories both good and bad.

The piece however will shed more light on his relationship with one of his partners, Lakiha Spicer or also known as Kiki Tyson. She admittedly is one of the few – or arguably the only who has the credit for rescuing Tyson from his state of despair and turning his life around.

Here’s what you need to know about her relationship with the baddass man on the planet.

When Lakiha first met Iron Mike, she was still a teenager, 18. On the other hand, Tyson was already 29 years old. Spicer happened to encounter the ex-fighter whilst attending one of his boxing matches with her father, Shamsud din Ali, according to the New York Post.

It was promoter Don King who introduced Spicer to Mike. However, King reportedly wanted Tyson to remain away from Spicer.

Nevertheless, nothing serious happened between Tyson and Spicer soon after their first meeting. The two started dating after Lakiha turn 23-years-old. At the time, Tyson however was still the legal husband of his second wife, Monica Turner. Turner and Tyson divorced in 2003. Not just Turner, Mike reportedly happened to have affairs with several other women during the point when his relationship with Kiki was just starting. In the past, he also had a marital relationship with Robin Givens.

Although Tyson has had relationships with numerous women, Spicer’s the only one with whom he has been the longest. However, the two have broken up several times. Lakiha once herself admitted to that but also said she could never really get him out of her system. In an interview, Kiki admitted that Tyson is the only person with whom she was able to fall back in love several times.

During Her Relationship With Tyson, Lakiha Spicer Also Went To Prison

Similar to her longtime husband, Tyson, Spicer, too, has had some troubles with the law. Back in 2004 when she was dating Tyson, Spicer became one of six people who were charged with money laundering crime.

The trial reports state Spicer netted some $71,000 without doing her job as a teacher at the Sister Clara Muhammad School in Philadelphia. Previously the school had Lakiha’s mother Faridah Ali as its Assistant Director Of Education.

The process to gain the money had been a scheme from the beginning. The fund initially came with the objective to offer adult education courses and job training. One of the other people to have been a part of the scheme was Spicer’s own brother Azheem Spicer. The court upon finding her guilty charged Spicer with two counts of conspiracy, four counts of mail fraud, and one count of theft concerning programs receiving federal funds. The charges also included one count of false statements. According to some reports, Tyson’s wife back then could have gone to prison for a whopping 105 years.

Lakiha knew she was pregnant with Mike’s baby a week before her prison time was about to start. So Spicer was pregnant the whole time she was behind the bars. Lakiha delivered her and Tyson’s baby shortly after she came out of prison. The Kid Dynamite and Kiki named their child/daughter, Milan, born Dec 25, 2008.

Spicer and Tyson’s daughter, Milan is now 14 years old and according to sources, she is pursuing a career in tennis. In fact, Milan currently is under the tutelage of Patrick Mourotoglou. He is the very man who also trained Venus and Serena Williams.

Milan has already participated in several junior competitions including the Feb 2021 United States Tennis Association tournament. Her father Mike was also among the attendees.

Spicer And Tyson Married In 2009; Tyson Had Just Lost His Daughter

Tyson and Spicer married each other on June 6, 2009. This was the following year of Lakiha’s release from prison. After her prison time was over, Spicer wasn’t allowed to live with Mike under the same roof. This was because of their respective convictions.

However after some months had passed, Spicer and the now 56-year-old boxer tied the knot in Las Vegas. The ceremony took place at the La Bella Wedding Chapel.

The nuptials however didn’t occur at the ideal time. Two weeks earlier, Tyson had lost his four-year-old daughter, Exodus in a horrible treadmill accident. She was Mike’s daughter with one of his ex-partners, Sol Xochitl. The Fort Greene native altogether has six kids including Miguel Leon Tyson, Ramsey Tyson, Mikey Lorna Tyson, Amir Tyson, Morocco Tyson, and Milan Tyson.

Many assume Tyson and Spicer’s relationship deepened after the latter’s release from prison as, at the time, both of them were in their darkest hours. Tyson had just lost a baby and was also struggling with drug addiction.

Even after Spicer had finished her sentencing, she couldn’t meet Tyson for the reason mentioned above. Also, Tyson himself has admitted that during those times he really didn’t think of taking care of a woman or having a commitment.

He, though, says that it was also something that he wanted. In his eponymous documentary, Tyson says, around the time, he and Spicer were living separately, he wanted to be courageous and have a family as well as respect and be faithful to a woman. He therefore would eventually marry Lakiha and has since remained her husband.

Tyson says he is just happy to have her in his life and describes her as a true lifesaver.

In addition to Milan, Spicer also has one more child/son with Mike. His name is Morocco Elijah Tyson and was born on January 25, 2011. Lakiha and Tyson according to some public records reside in Henderson, a mile away city from Las Vegas. Their property had a purchase value of $2.5 million in 2016.

Who Is Laura Ingraham Husband? List Of Her Boyfriends